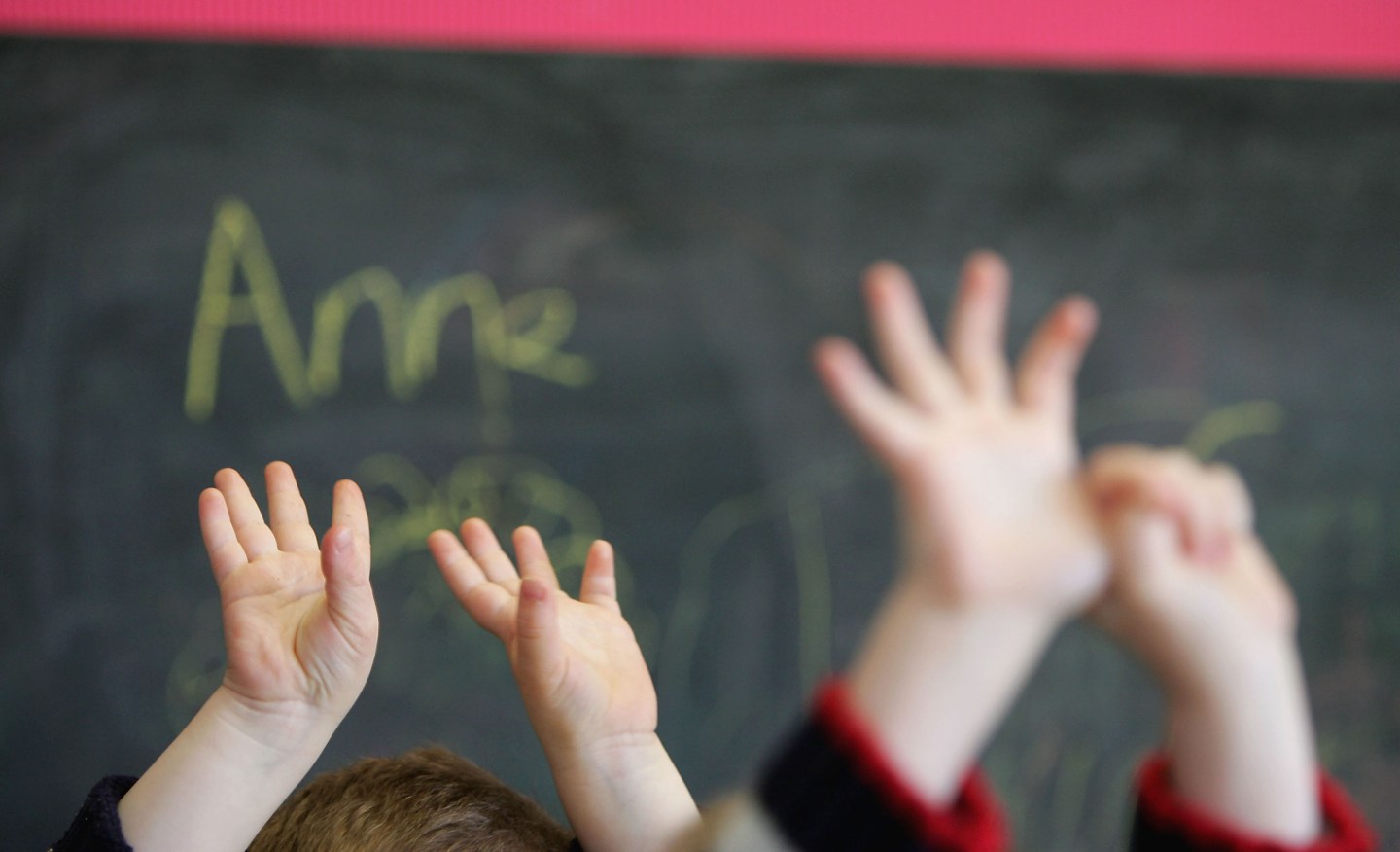 These desks are set at a height that allows students to alternate between sitting on a stool or standing while working.

Standing desks “can interrupt sedentary behavior patterns” while kids are in school, “simply, at a low cost, and without disrupting classroom instruction time,” the authors of the study write in the American Journal of Public Health.

The researchers studied third- and fourth-graders in three Texas elementary schools and found that kids spent more time on their feet, and slimmed down, when the standing desks were used instead of traditional classroom desks.

Healthy weights are assessed differently in children than in adults. Because weight and height change during growth and development, doctors don’t simply calculate kids’ body mass index (BMI), which is a ratio of weight to height. Instead, they compare the child’s BMI to the BMI of other children of the same age and sex. For children, a normal BMI can fall between the 5th and 85th percentiles—that is, not in the bottom 5% or the top 15% among kids their age.

The study started out with 24 teachers and 380 students. The teachers were randomly assigned to have standing desks in their classrooms, or regular desks.

About 80% of the kids started out at a normal weight, but the researchers didn’t separate out the results in the overweight kids.

Reducing sitting time among school-age students could decrease the inactivity linked to a range of health problems, including obesity and diabetes, Mark Benden of the Texas A&M School of Public Health Ergonomics Center in College Station and colleagues wrote in their report.

“If you look at the national trends, we’re more sedentary than ever before, and naturally that affects weight gain,” Benden told Reuters Health.

“With the focus on state testing and academics, we’ve lost the regular recess and physical education time in schools,” Benden said. Standing desks bring “a difference to the classroom that doesn’t take away from classroom time.”

Previous research has linked sedentary time to poor academic achievement and low self-esteem in children, the research team pointed out.

“We force kids to sit down, sit still and be quiet, and this is unnatural for young children,” Benden said. “If we want kids to sit less and move more, we should encourage activity in the learning process.”

Standing desks would help in that regard, he said.

A limitation of the experiment, Benden noted, is that during the two-year study, some students moved to a different school or switched classrooms.

“This study introduces the realities of the world that teachers change and kids move in and out of schools,” said Mark Tremblay, who studies healthy living and obesity at Children’s Hospital of Ontario Research Institute in Ottawa, Canada.

Because we don’t know whether obese or disabled children were in the classrooms with standing or sitting desks, the results could be biased, said Tremblay, who wasn’t involved in the study.

Still, Tremblay said, “The findings are still encouraging. I’d say this is a large pilot study that needs to be further explored as a means to promote healthy living behaviors at early ages.”

Encouraging students to stand and move could help them develop healthy habits that may impact future obesity in adulthood, said Kermit Davis of the University of Cincinnati, Ohio who wasn’t involved with the study. Davis researches workplace stressors, particularly those that can stress the lower back.

“One key is not to just have students stand but also provide postural relief (such as stools) so they can lean or sit for micro breaks,” Davis told Reuters Health by email. “Too much sitting is certainly bad, but the other extreme of too much standing can also be bad.”