What’s Holding Back the Housing Market? Not Enough Construction Workers 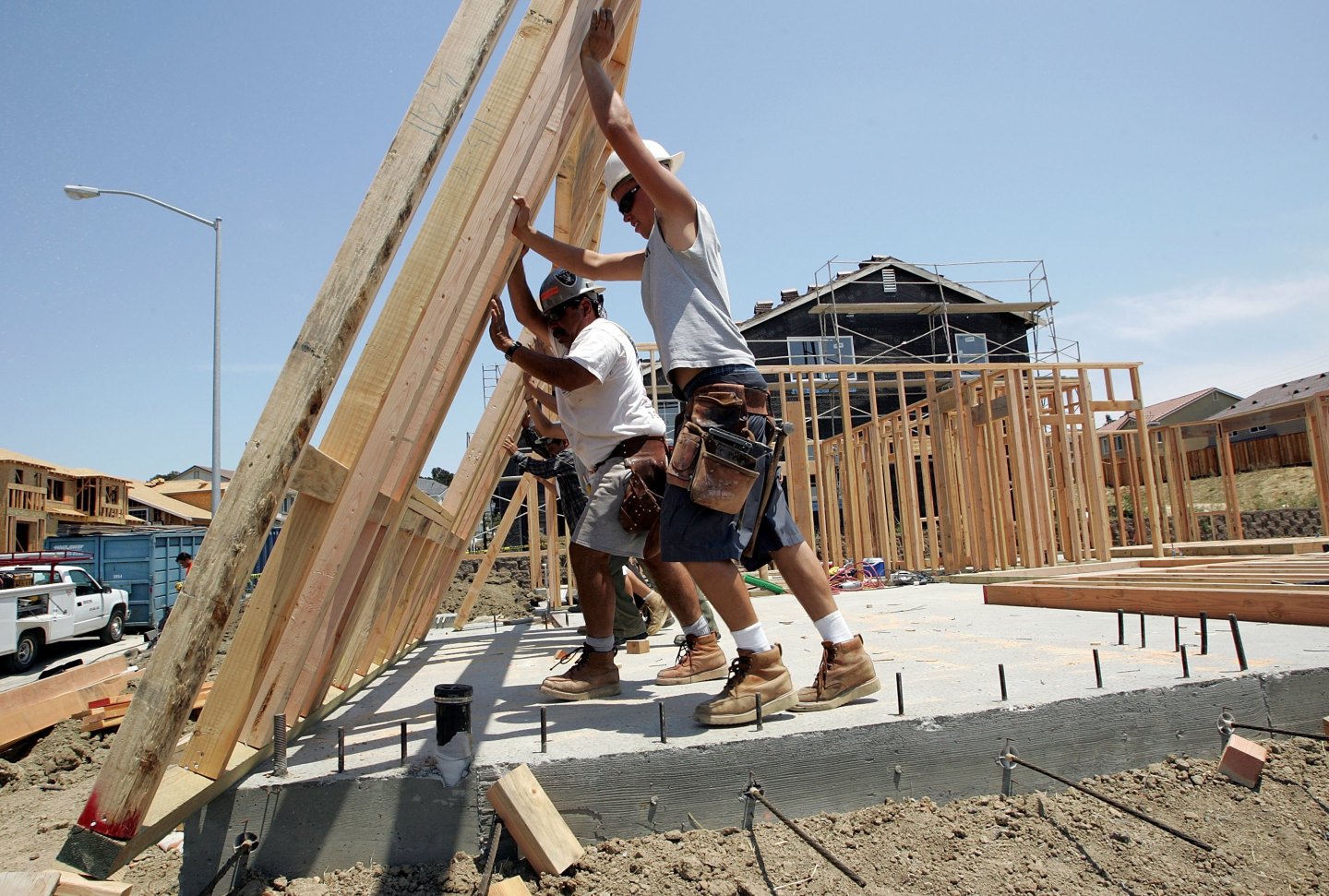 RICHMOND, CA - JUNE 26: Construction workers raise wood framing as they build homes in a new housing development June 26, 2006 in Richmond, California. A report issued by the U.S. Commerce Department stated that sales of new single-family homes were up 4.6 percent in May. The median price of homes sold in May slipped to $235,300, down 4.3 percent from April. (Photo by Justin Sullivan/Getty Images)
Justin Sullivan/ Getty Images

The drumbeat of hammers echoes most mornings through suburban Denver, where Jay Small, the owner of company that frames houses, is building about 1,300 new homes this year.

That’s more than triple what he built a few years ago, when “you couldn’t buy a job” in the residential construction industry, he said.

Eight years after the housing bust drove an estimated 30% of construction workers into new fields, homebuilders across the country are struggling to find workers at all levels of experience, according to the National Association of Homebuilders. The association estimates that there are approximately 200,000 unfilled construction jobs in the U.S. – a jump of 81% in the last two years.

See also: There Are Too Many Expensive Apartments in U.S. Cities, and That Should Sound the Alarm

The ratio of construction job openings to hiring, as measured by the Department of Labor, is at its highest level since 2007.

“The labor shortage is getting worse as demand is getting stronger,” said John Courson, chief executive of the Home Builders Institute, a national nonprofit that trains workers in the construction field.

The impact is two-fold. Without enough workers, residential construction is trailing demand for homes, dampening the overall economy.

And with labor costs rising, homebuilders are building more expensive homes to maintain their margins, which means they are abandoning the starter home market. That has left entry-level homes in tight supply, shutting out may would-be buyers at a time when mortgage rates are near historic lows.

Nationwide, there are 17% fewer people working in construction than at the market peak, with some states – including Arizona, California, Georgia and Missouri – seeing declines of 20% or more, according to data from the Associated General Contractors of America.

The labor shortage is raising builders’ costs – and workers’ wages – and slowing down construction.

Small, the Denver builder, estimates that he could construct at least 10% more homes this year if he had enough workers. But he remains short-staffed, despite raising pay to levels above what he paid during the housing bubble a decade ago.

“It’s getting to the point where you’re really limited in what you can deliver,” Small said. “We lost so many people in the crash, and we’re just not getting them back.”

See also: 3 Reasons the ‘Disappointing’ August Jobs Report Wasn’t So Bad After All

The average construction cost of building a single family home is 13.7% higher now than in 2007, even as the total costs of building and selling a house – a figure that includes such items as land costs, financing and marketing – are up just 2.9% over the same period, according to a survey by the National Association of Homebuilders.

The problem is accentuated by strong demand for newly constructed homes, with sales reaching a nine-year high in July.

Private companies say that they are having a hard time attracting workers, and they are often forced to give employees on-the-spot raises to prevent them from going to competitors. Carpenters and electricians are often listed as the most in-demand specialties.

Tony Rader, the vice president of Schwob Building Company, a general contractor in the Dallas area, said his company has started handing out flyers at sporting events, churches and schools in hopes of luring more people into the field.

See also: Here’s Why You Should Be Happy the Unemployment Rate Is Rising

“The biggest problem I face every day is where are we going to find the people to do the work,” he said, adding that it’s becoming increasingly common for his company and others to turn down projects.

Dallas contractors are fighting over the limited supply of workers as three major mixed-use projects are going up right next to each other on the so-called “$5 billion mile” in Frisco, a northern suburb. Meanwhile, the metropolitan area is adding about 30,000 newly built homes annually.

With fewer workers, contractors are becoming wary of signing new work contracts, especially as many of them include fines for not completing a job by a designated date.

“I’ve got two lawsuits right now where it may cost us mid-six-figures because there’s not enough labor out there to get it done,” said one contractor in the North Dallas area who declined to be identified.

Lawyers in hot residential markets say that it is becoming increasingly common for construction companies to try to negotiate for more time.

“Subcontractors are having a hard time staffing up,” said Edward Allen, a Denver attorney who said he has seen more lawsuits over project delays in the past two years.

Colorado alone will need 30,000 more workers in the construction field in the next six years, a number that does not account for those who will retire, according to a study by the Association of General Contractors.

Yet Michael Smith, who heads a Denver-based nonprofit that administers the training, said that he can’t fill the seats. High schools are focused on preparing students for college, ignoring those that may be better suited for vocational work. Students may be put off by construction’s reputation as a dangerous, cyclical field, he said.

“We’ve so demonized working with your hands in this country,” he said. “We’ve got a booming economy, and we can’t keep up with the pace of growth.”

Students who go through the four-week program are all but guaranteed a job paying $16 an hour or more immediately, with the possibility of commanding $80,000 or more in annual income after five years without taking on any student debt, he said.

On-the-job training is also a common path for new workers. Eduardo Salcido – a 25-year-old concrete finisher working at a 232-home Toll Brothers subdivision going up in the Denver suburb of Broomfield – said that he received on-site training after entering the construction field as a painter.

He has earned one raise since beginning the training two years ago and is now certified as a semi-skilled finisher.

For more on the U.S. housing market, watch Fortune’s video:

Homebuilders are increasingly desperate to bring back in fully skilled laborers such as Greg Lewis, a 43-year old journeyman carpenter in St. Louis. After struggling to find work in 2010, Lewis started making leather goods at home and selling bags, belts and wallets online. He now operates his business fulltime under the name Made Supply Co.

Even though he’s making less than he did in construction, Lewis is not tempted to go back into a field that is marked by job insecurity, he said. His former co-workers have gone on to work in warehouses or a local General Motors plant, and most are choosing not to return to their old jobs even as contractors offer higher wages.

“Guys couldn’t wait around for their next job, and now they don’t want to go back to a field that could turn on them,” he said. “It’s either hot or cold, and you just can’t trust it.”