Here’s Where China Stands After G20 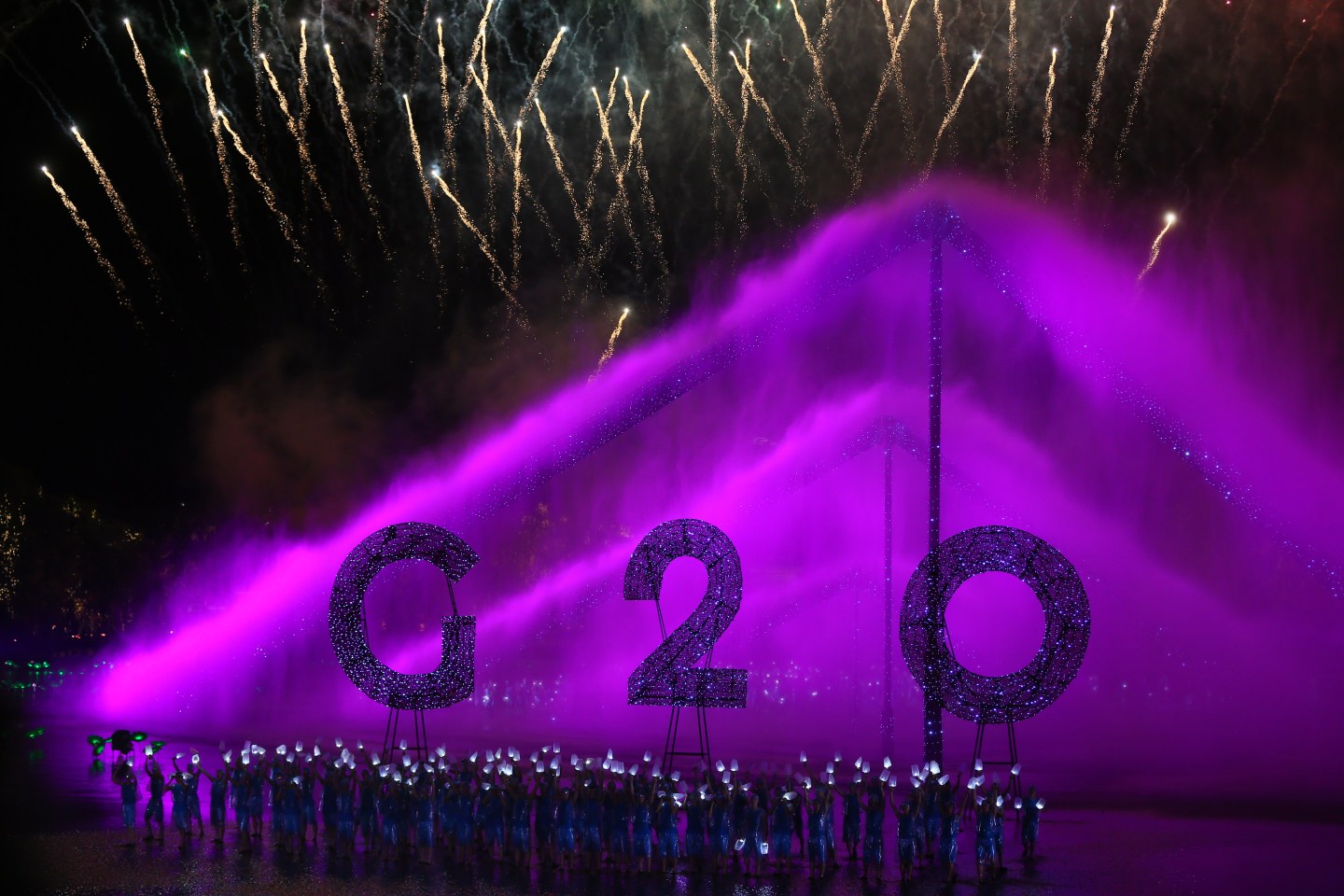 HANGZHOU, CHINA - SEPTEMBER 04: Artists perform onstage and fireworks explode in the sky during a gala of the G20 summit at the West Lake on September 4, 2016 in Hangzhou, Zhejiang Province of China. Leaders and other guests from the G20 major economies attended a banquet and enjoyed a gala at the West Lake on Sunday evening during the 11th G20 Leaders Hangzhou Summit. (Photo by VCG/VCG via Getty Images)
VCG/VCG via Getty Images

China is lauding its successful hosting of the G20 summit in scenic Hangzhou, with open confrontation largely avoided and broad consensus reached over the fragile state of the global economy and the need for a wide range of policies to fix it.

There was even a joint announcement by China and United States that they would ratify the Paris climate change agreement, a significant step for the world’s two biggest emitters of greenhouse gases.

But scratch beneath the surface, and the gathering of the world’s most powerful leaders was not all plain sailing – from the distraction of a North Korean missile test to the failure of the United States and Russia to reach agreement over Syria, and diplomatic faux pas to double speak over protectionism.

See also: Is Globalization in Retreat?

Chinese state media, while largely basking in the glory of a summit that happened without being too overshadowed by disputes such as the South China Sea, also let slip Beijing’s frustrations at what it sees as Western efforts to stymie its economic ambitions.

“For the world’s major developed economies, they should curb rising protectionism and dismantle anti-trade measures as economic isolationism is not a solution to sluggish growth,” China’s official Xinhua news agency said late on Monday.

“In order to build an inclusive, rule-based and open world economy, protectionism must be prevented from eroding the foundation for a faster and healthier economic recovery.”

In the run-up to G20, China has been particularly upset by what it sees as unwarranted suspicion of its overseas investment agenda smacking of protectionism and paranoia.

A few weeks before the summit, Australia blocked the A$10 billion ($7.63 billion) sale of the country’s biggest energy grid to Chinese bidders, while Britain delayed a $24 billion Chinese-invested nuclear project.

Behind the scenes, Western countries have been accusing China of not sticking to its own goals.

Before the summit, European G20-sources doubted that the Chinese agenda would mark a real new chapter to create more sustainable growth for the global economy.

China, asking in public for more openness and steps to counter protectionism, is still giving Western investors only very limited access to their market, a European official said.

A big concern for foreign investors in China is what they see as the increasing difficulty of doing business in China, driven by concern that new laws and policies are seeking to effectively shut out foreigners or make life very hard for them.

“President Xi accurately raised the alarm on the need to counter the increase in protectionism around the world,” said James Zimmerman, chairman of the American Chamber of Commerce in China.

“But actions speak louder than words and the ball is in China’s court to implement its own needed domestic reforms and to provide greater market access for foreign goods, services and technology.”

And calls to utilize innovation as an economic driver should reflect policies that encourage an environment promoting fair and market-driven innovation that is open to all participants, and not just a few domestic champions, Zimmerman said.

Several diplomats familiar with the summit said China had resisted the idea of putting steel on the final communique, though it did make an appearance in the end with G20 leaders pledging to work together to address excess steel capacity.

For countries like Britain, whose steel industry crisis has been directly blamed on a flood of cheap Chinese imports, the issue is key.

An official from British Prime Minister Theresa May’s office said they and the United States had pushed for language in the communique on the importance of working together at G20 to tackle excess production.

“We have, despite resistance from some countries, secured some language on the importance of doing that,” the official said.

Asked if China was one of those resisting, she just repeated “in the face of some resistance.”

See also: Philippine President Declares a State of Emergency Before Heading to Laos

Another shadow over the G20 has been the rise of popular opposition to free trade and globalization, embodied by phenomenon like Britain’s summer vote to leave the European Union and Donald Trump becoming the Republican presidential candidate in the United States.

“We agree with the G20’s analysis that the benefits of trade and open markets must be communicated to the wider public more effectively,” said John Danilovich, Secretary General of the Paris-based International Chamber of Commerce.

For more on China on the world stage, watch Fortune’s video:

“It’s vital that business and governments work together to explain how and why trade matters for all.”