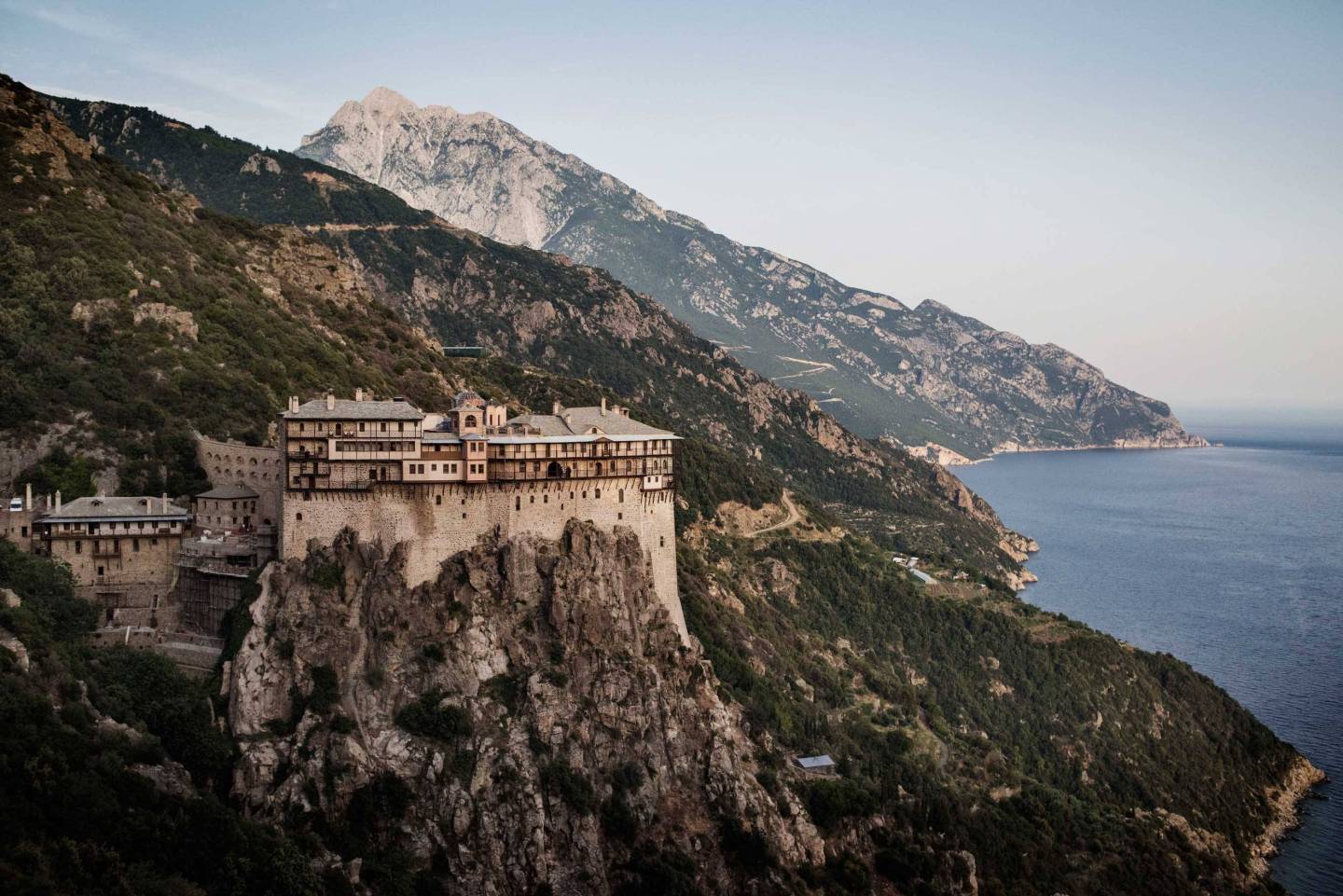 A senior aide to President Vladimir Putin made a pilgrimage to one of Greece’s holiest places in May, despite being barred from the E.U. under sanctions imposed for the Russian annexation of Crimea from Ukraine.

Three sources independently confirmed to TIME that Vladislav Surkov, a close associate of Putin who was involved in the 2014 Crimean invasion, had travelled to the Holy Mountain of Athos, a place of pilgrimage for Orthodox Christians, around the same time as the Russian President. Putin’s visit to the holy site on May 28, along with a retinue of Russian priests, state officials, energy executives and wealthy patrons of the Orthodox Church, is the subject of a TIME feature.

The Kremlin’s response when asked about Surkov’s travels was prompt but very brief, consisting of just one sentence typed out on the letterhead of the Russian presidential administration. This information, the statement said, “does not correspond to reality.”

Surkov has been banned from traveling to both the U.S. and the European Union since 2014, when he helped to orchestrate the Russian annexation of Crimea. As an E.U. member, Greece is legally obliged to help enforce those sanctions. The Greek official who oversaw the Russian state visit is Deputy Foreign Minister Ioannis Amanatidis, who did not reply to written requests for comment.

Vladislav Surkov’s presence on this trip would seem unlikely to Kremlin watchers, and not only because it would constitute a breach of E.U. sanctions. While there are plenty of pious officials in Putin’s immediate circle—apparatchiks who switched from the Soviet dogmas of communism to the Orthodox tenets of faith as the political winds turned in Russia in the 1990s—Surkov has always kept his distance from them.

For more than a decade, Surkov has been known in Russia as the brains behind the throne—the chief architect of Putin’s system of bloodless authoritarianism (known in Surkov’s writings as “sovereign democracy”)—and, more recently, as his country’s lead negotiator with the U.S. in the stalled efforts to resolve the conflict in Ukraine. But outside of his official functions, he has cultivated a reputation closer to that of a hipster savant, with a wide range of interests that are hardly in line with the traditions of Orthodoxy.

Among other works ascribed to him in Moscow are lyrics for members of the Russian goth-rock band Agatha Christie, as well as a novel, Almost Zero, that is tinged with scenes of torture and characters mocking the Orthodox faith. His favorite American poet is the Beatnik bard Allen Ginsberg, whose works Surkov can recite from memory. In 2011, when a Russian photographer visited Surkov’s office in the Kremlin, he found a framed portrait of the rapper Tupac Shakur on his desk next to another one of President Barack Obama. There were, however, no Orthodox icons or other religious images in the room. And even while Surkov served as the government’s chief of religious affairs in 2012 and 2013, hardline Orthodox believers pointed to his intellectual pursuits as a sign of his supposed “Satanism.”

So his presence on the Holy Mountain would not just seem out of character. It would also signal a broader shift in the political class, says Alexander Dugin, one of the Kremlin’s favored ideologues, who was among Putin’s entourage on Mount Athos in May and confirmed that Surkov was also there. “The fact that even secular cynics like Surkov joined such a delegation shows that the Orthodox worldview has already spread deeper through the layers of the political elite,” Dugin says. “And that is a natural process.”

As TIME has reported, Athos is much admired by the more conservative wing of Putin’s circle, whose members often profess devotion to the Orthodox faith. The President himself has made a pilgrimage to the Holy Mountain twice, once in 2005 and once this year, visits that have been hailed as evidence of Russia’s return to leadership within the world of Orthodoxy. Supporters of this trend within the Russian elites tend to believe in the “imperial legacy of the Church,” says Sergei Chapnin, a religious scholar who edited the official journal of the Russian Orthodox Church until late last year. That legacy dates back to the age of the Russian czars, who saw themselves as the rightful heirs and guardians of the one true Christian faith, he says, “and that [view] is now being reanimated.”

This has been clear in Russia’s recent military incursions in Ukraine, as well as its bombing campaign in Syria, both of which Putin has tried to justify as a means of protecting Orthodox Christians. Within the political elites in Moscow, this shift has brought equally dramatic changes to the status quo. It is now common, for instance, for state officials to have an Orthodox dukhovnik, or spiritual guide, to offer them advice and take confessions of their sins.

Putin’s dukhovnik has long been rumored to be a prominent Moscow bishop named Father Tikhon, who enjoys a great deal of sway with the President. Just this week, the bishop helped arrange a visit to Moscow for a group of students from Eton, an elite British boarding school, and Putin granted them a long and private audience in the Kremlin. Olga Vasilyeva, a long-time friend and devotee of Father Tikhon, was appointed Minister of Education and Science last month.

On May 27, when Surkov is said to have visited Athos, he also seems to have sought the council of a spiritual guide. Father Makarios, a well-known resident of Athos who took his monastic vows nearly half a century ago, confirmed that Surkov came to see him. Driving into the courtyard of his cell that day in the company of a Russian tour guide, Putin’s adviser introduced himself as Vladislav, “a top Kremlin official,” says Father Makarios, whom TIME interviewed on Mount Athos two days after the visit.

At first, the monk did not realize just how powerful his guest might be. But the visit did not especially surprise him; Father Makarios knew that Putin was due to arrive on Mount Athos the following day. Patriarch Kirill, the head of the Russian Orthodox Church, had arrived the day before. Boats and helicopters were coming and going all week with Russian dignitaries and supplies. And in the last few years, it has become common for Father Makarios to receive wealthy and influential guests from the Russian-speaking world—including, he says, one senior member of the former government of Ukraine, whose violent ouster in 2014 set the annexation of Crimea in motion.

“In the last years we have too many Russian pilgrims,” says Father Makarios in accented English, sounding somewhat exasperated with all the new guests. As a rule, he says, their spiritual needs stand out from the rest of his guests, who are mostly Greek. “What I see different in them is that they try not to be responsible for their deeds,” he says of the Russian pilgrims. “That’s why they ask a lot of questions, so that the responsibility is on someone else.”

One Russian businessman has even built a house for himself on Father Makarios’s property, ensuring a comfortable place to stay during his frequent trips to see the monk. Other Russian pilgrims have come to Father Makarios with a written “catalogue of sins,” which he likes to take away and tear to shreds without reading a word. “They say, ‘Oh, my sins!’ And I say, ‘Your sins are gone. They’re finished. They belong in the past.’”

In Orthodox tradition, this type of absolution is typical of the bond between the believer and his spiritual guide. The value of this relationship, says Father Makarios, is the confidence it gives the faithful in tackling moral dilemmas. At least in the Greek branch of Orthodoxy, the dukhovnik tries to offer freedom from the moral paralysis that comes with excessive feelings of guilt. “All those who try to govern the flock do so with guilt, so they are easily governed,” says the monk. “That is what I try to help them overcome.”

But Surkov was an unusual case. Instead of asking for redemption he seemed intrigued by spirituality in general, Father Makarios says. “I felt good with this guy. He’s more than ten years close to the President, and he has bright eyes. This is very important, because [normally] you become a machine.” Asked whether they discussed any matters of state or Russian policy, the monk laughed and said he would not be qualified to give advice on issues like that.

Nor did he have any photos or other physical evidence of Surkov’s visit. To help rule out a case of mistaken identity, I showed Father Makarios pictures of all the senior officials who travelled with Putin to Athos—about a dozen in all. Studying these photos, the monk shook his head and asked to see others. Only when shown a photo of Surkov did he say, “Yes, that’s him, Vladislav.” A third source, who asked to remain anonymous, also says he saw Surkov on Mount Athos that day.

What remains a total mystery is how Surkov could have entered Mount Athos in circumvention of E.U. sanctions. Although Amanatidis, the Greek deputy minister, did not respond to TIME’s queries about Surkov, he told this reporter in May that Putin and his delegation were treated like any other foreign guests. “The spiritual bonds between Russia and Greece are very deep,” he told me. “But that doesn’t in any way mean that this treatment is special for Putin.”

Yet the Greek authorities were seen to show some leniency in welcoming the Russian visitors. When Dugin, the pro-Kremlin ideologue, arrived at the airport in northern Greece along with a crew of Russian TV reporters and cameramen, Greek police pulled him out of the line at passport control.

Dugin’s role in the Russian military intervention in Ukraine had gotten him placed on a U.S. blacklist in 2014, freezing his U.S. assets and denying him visas, all in retaliation for his alleged recruitment of paramilitaries to fight against the Ukrainian military. But the E.U. stopped short of issuing a similar ban against Dugin, so he was surprised by the behavior of Greek police.

After a night in detention, he learned that some E.U. officials, apparently in Hungary, had put him on a list of “undesirables,” which had raised the red flag at the airport. “This is all a reaction to Crimea, against the people in Russia who especially supported the return of Crimea,” Dugin says. “But each [E.U.] country can choose to act on these recommendations as it likes.” After some pressure from Dugin’s contacts in the Russian Foreign Ministry, the Greek authorities apparently chose to let him pass.

They could not legally have done the same for Surkov. His name is on the E.U.’s most restrictive list of Russian officials involved in the annexation of Crimea. So it seems remarkable that he would choose to violate those sanctions for the sake of what appears to be a pilgrimage.

But even if he did join the Russian delegation in May, it would not quite make him a full-fledged member of what Dugin refers to as the Athos Club. “He is cut from a totally different cloth,” Dugin says. Many of the people who traveled with Putin to Athos this time were relative newcomers to the Orthodox faith. “These were people who saw that this had become the trend in the Russian elite,” he says. “Now we’re seeing, layer by layer, the return of the elites to their Orthodox roots.”