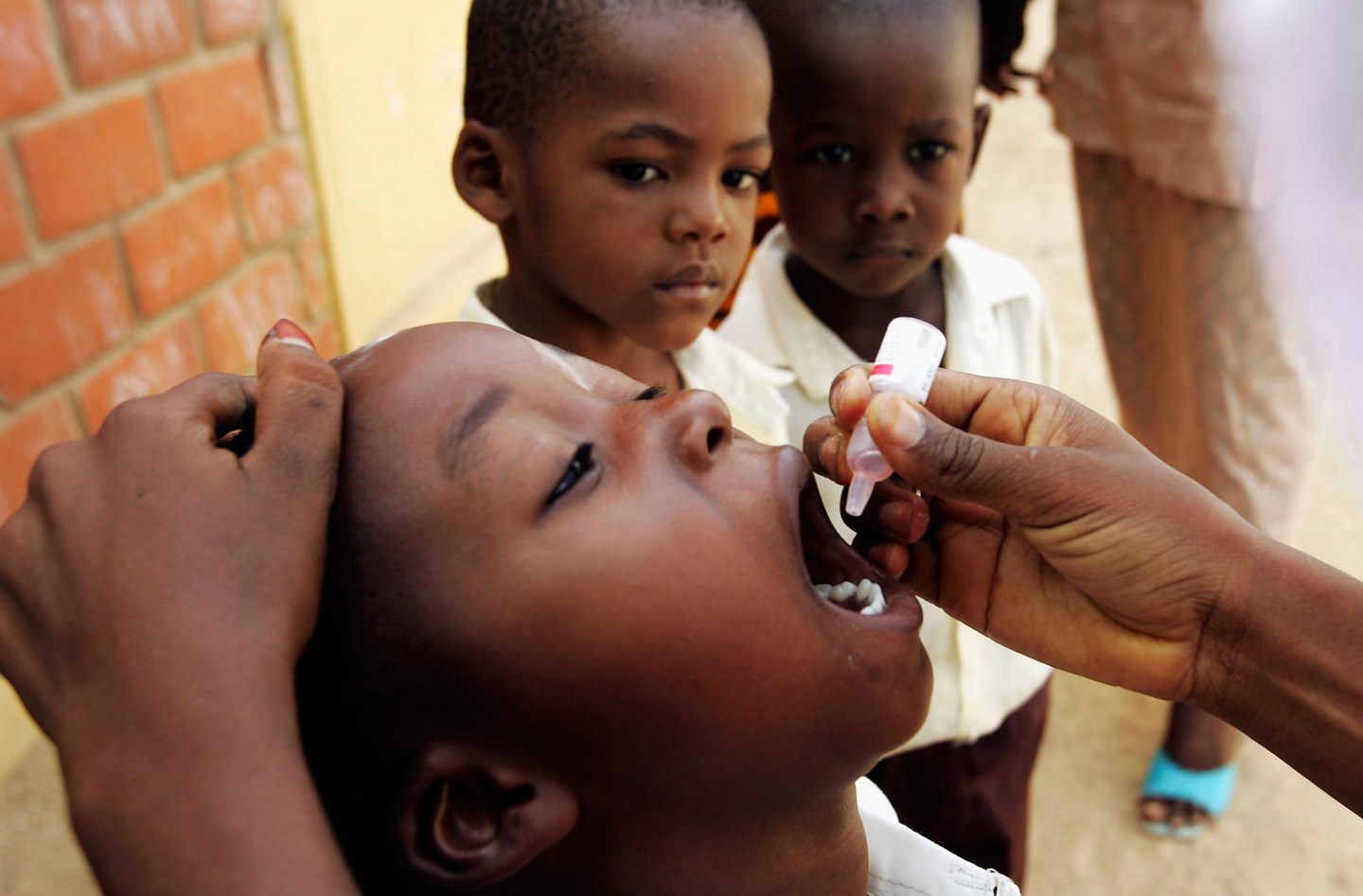 An emergency polio vaccination campaign aimed at reaching 25 million children this year has begun in parts of Nigeria newly freed from Boko Haram Islamic extremists, with fears that many more cases of the crippling disease will likely be found.

Two toddlers discovered last month were Nigeria’s first reported polio cases in more than two years, putting the world on alert just months after the African continent was declared free of the disease.

One member of the Rotary Club’s “End Polio Now” drive said he almost cried when he got the news. It was a major blow to global efforts to stamp out polio, which persists in only two other countries, Pakistan and Afghanistan.

The Associated Press joined the vaccination drive in northeastern Nigeria, a campaign going to extraordinary lengths to fight the disease in areas still threatened by Boko Haram extremists who violently oppose Western medicine.
Health workers using military helicopters, all-terrain vehicles and even tricycle taxis vaccinated about 1.5 million children in the past week alone, starting in the refugee camps where the new cases surfaced.
Portable System Could Produce Biotech Drugs On-Demand in Remote Areas

The World Health Organization has said the two new cases indicate the wild polio virus has been circulating for five years in northeastern Borno state, where Boko Haram began its uprising in 2009.

Just 20 years ago, this West African nation was considered the world’s epicenter of polio, recording 1,000 cases a year. Men and women with twisted limbs crawling along the roadside to beg are still a common sight. A global drive to end polio began in 1988, when the highly contagious disease was endemic in 125 countries.

Though progress has been made, wiping out polio probably will not be possible without ending the unrest tied to Islamic extremism that prevents vaccination in the three countries where the virus still is endemic, according to a new report from U.S.-based risk analysis group Stratfor.

“Boko Haram is largely responsible for the insecurity that has hamstrung vaccination efforts in Nigeria,” the report said. “Though the group has weakened since the start of 2015 … as long as this security risk remains, so, too, will the risk that Nigeria’s latest run-in with polio will not be its last.”

Boko Haram is in retreat but remains deadly. In July, militants attacked a humanitarian convoy near Maiduguri, the region’s largest city, leading the United Nations to suspend aid to newly liberated areas where it says half a million people are starving.

Over the years, the vaccination campaign has had to fight rumors that the vaccine was a plot to sterilize Muslims, which it overcame by winning over religious and traditional leaders and grassroots women’s groups.

“Yes, it’s a major setback, but we are not defeatist,” Funsho declared of the latest cases. He looked over a map of Borno state that showed only a small southern section as “accessible,” most of the sprawling state “partially accessible” and a band in the north bordering Niger, Cameroon and Chad as “inaccessible” because of Boko Haram fighters.

Over the past week, hundreds of health workers from the government, the United Nations and aid organizations spread out across Borno state, delivering the vaccinations through drops on the tongue.

For areas too dangerous to reach by road, helicopters delivered vaccines to already trained people on the ground, to avoid suspicion of strangers, said Rotary field coordinator Aminu Muhammad.

“We’ve even been able to reach a couple of areas that we had been told by the military were inaccessible, after community leaders informed us we could get through,” Muhammad said proudly.

“Still, there were some major communities outside the metropolitan areas that we were unable to reach,” Muhammad said.

He could not estimate costs for the massive campaign because organizations like the U.S. Centers for Disease Control, the U.N. children’s agency and London-based Save the Children all are participating with their own budgets.

Most vaccinators are women because men traditionally are not allowed into the home of a Muslim woman if her husband is absent.

One campaign member, Maryam Kawule of the Core Group, led green-veiled young women ticking off family names handwritten in an exercise book. “We do the preliminary work of counting the children, and we’re here now to ensure every kid under 5 gets his or her vaccination,” she said.

It doesn’t end there. The polio vaccine has to be administered at least three times to each child, and up to five times in endemic areas, so more rounds are planned next year.