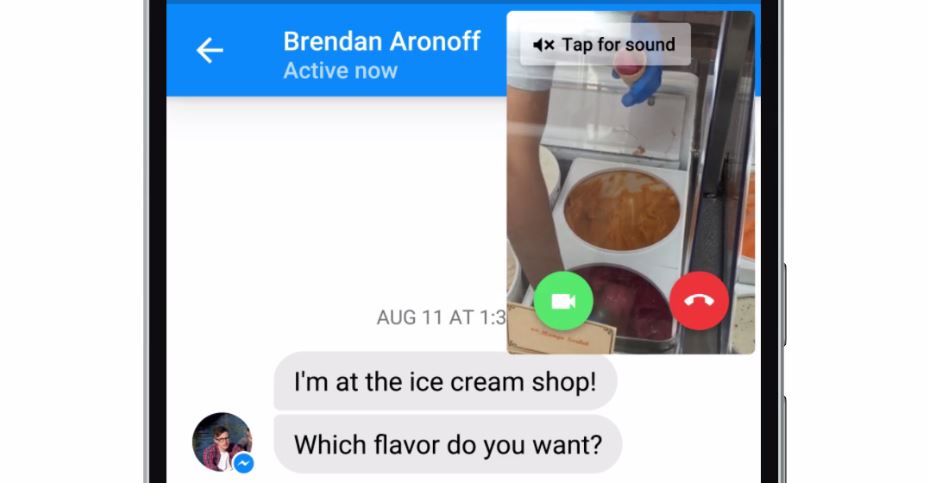 Facebook Messenger got a video-calling feature back in April 2015, but now it’s introduced a second one that’s meant to have a rather different use case.

While the existing video-calling feature is rather like Microsoft’s (MSFT) Skype or Google’s (GOOG) Hangouts and Duo—you decide to have a video-based chat as an alternative to text or voice—the new Instant Video feature is meant for short bursts of live footage.

Indeed, audio is turned off by default in this Facebook (FB) Messenger feature, although it can easily be turned on. The point is to augment an ongoing text-based conversation, not to replace it.

“Sometimes you want to ask a friend’s opinion on a pair of shoes you want to buy, weigh in on what ice cream flavor they should bring home, or just want to see your BFF’s reaction to your witty message when you’re in a place where you can’t actually talk live,” Facebook said in a blog post.

Instant Video arguably represents Facebook again trying to keep up with Snapchat, the upstart messaging service that’s used by millions of young people and also encourages users to share video of what they’re doing in the moment.

Last month, Facebook’s Instagram launched a “Stories” feature that was very similar to Snapchat’s, and it has previously tried (less than successfully) to clone Snapchat’s ephemeral take on photo and video-sharing.

In June it was reported that Snapchat had 150 million daily users, outpacing Twitter (TWTR) in daily usage and showing 35% growth in the previous five months.

For more on Snapchat, watch our video.

Facebook Messenger has a billion monthly users, though it’s not clear how many use it on a daily basis. The same goes for Facebook’s WhatsApp, which cleared the billion-monthly-users mark in February.

WhatsApp is yet to get any video-calling feature, although the functionality is reportedly in testing.