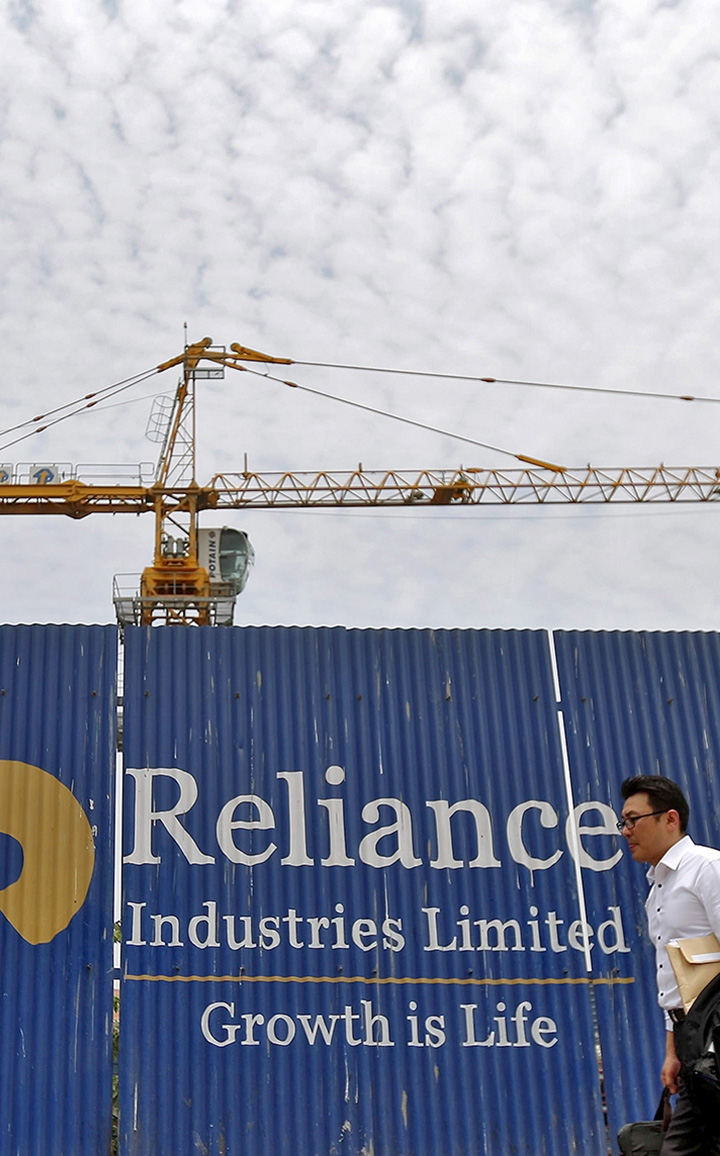 A man walks past an advertisement of Reliance Industries Limited at a construction site in Mumbai, India, May 14, 2015. Reliance Industries is in talks with Chinese manufacturers to secure cut-price phones that could be sold in packages from $30, as it seeks to repeat the low-cost revolution it unleashed with its first dip into India's mobile market more than a decade ago. REUTERS/Shailesh Andrade - RTX1CXVO
Shailesh Andrade — Reuters

At the vast open-plan headquarters of Indian telecoms startup Jio, billionaire oil tycoon Mukesh Ambani stands in short sleeves beneath a digital tracker that logs every new subscriber to his service.

The 59-year-old is India’s richest man, and his Reliance Industries oil and gas group is the country’s most profitable.

Now, though, he’s betting at least $20 billion on building, from scratch, a national digital empire stretching from phones and hardware to home entertainment and custom-made apps.

The ambitious Jio project could make Reliance the most comprehensive provider of telecom and Internet services across India—and give it unprecedented access to the country’s untapped “big data”: how millions eat, shop, and have fun.

“For Reliance…data is the new oil, and intelligent data is the new petrol,” Ambani said in March, explaining his drive to move closer to India’s consumers.

Reliance has said little publicly about Jio, and even less about the potential for wide-scale data mining in a country where consumers have not, to date, made a big deal about online privacy. But top executives are clear on the opportunity.

“It’s called Deep Packet Inspection, and what you can do with the analytics of that is mind-boggling,” said a senior Reliance executive, referring to a practice that digs into “packets” of data created by computers for efficiency, mining them for information.

Jio is unlikely to contribute significantly to Reliance profits anytime soon, but is hugely significant for its future. Reliance has dabbled previously in consumer sectors, yet Jio is seen as an opportunity for Ambani to set a new course for a company still dominated by his late father, its founder.

Jio is also a potentially landmark opportunity for India, where smartphone usage has ballooned and services like mobile payments and online entertainment have become commonplace.

The prospect of Jio, which has not yet been commercially launched, has raised hopes of cheaper, more reliable data for Indian users. It has already drawn queues at some stores by offering free connections with unlimited data for a three-month period, allowing it to test its network.

That has stirred rivals. India’s largest wireless provider Bharti Airtel this week cut its 3G/4G data tariffs on prepaid connections by more than 40%, after halving them a month ago.

Not Quite There Yet

But Jio—named from a Hindi exhortation to “live on”—is behind schedule and over budget, say several former employees, who, like current staff interviewed by Reuters, did not want to be named. It was initially expected to launch by the end of 2014, with total capital expenditure within $15 billion, they said.

Reliance has never provided a specific date or figure, and declined to respond to specific queries for this article.

According to filings at the Commerce Ministry, Jio has more than 325 billion rupees ($4.9 billion) of long-term debt, and other liabilities topping 580 billion rupees, as of March. In addition, Reliance has spent over 290 billion rupees on Jio and is expected to invest more—all adding up to more than what it has been spending on its core refining and petrochemicals business.

Reliance says its oil business is pumping out cash, and any investment in Jio has to be ambitious.

Two-thirds of India’s 1.3 billion population are not online, and Jio hopes to capture 100 million users—nearly half of India’s current smartphone users—within a year of launch.

For more on data mining, watch:

Ambani, who employees say taught himself to code, ran Reliance’s nascent telecoms operations in the early 2000s, before a feud with his younger brother Anil triggered a split and a bitter non-compete deal. Mukesh took the family’s energy business and Anil the communications assets, setting up Reliance Communications (RCom).

Before long, though, Mukesh was laying fiber cables again and set up a subsidiary, Rancore, to build its own mobile telephony technology.

In 2010, Mukesh’s Reliance Industries bought Infotel Broadband—on the day Infotel won nationwide spectrum—and decided it needed to offer more than a high-speed 4G network service. Instead, it would pitch an all-Internet service, where even voice calls would be carried as data, cheaply, beating its rivals Airtel, Vodafone and Idea on quality and speed, according to Jio officials.

Airtel, Vodafone, and Idea declined to comment on Jio.

Naveen Kulkarni, co-head of research at Phillip Capital, said the Jio technology was “very efficient from a cost point of view,” but needs India’s smartphone ecosystem to evolve, making it unlikely Reliance will make money from Jio for at least five years.

At Jio’s biggest campus, a sprawling cluster of glass buildings, manicured lawns, and giant Jio logos outside Mumbai, the scale of Ambani’s vision is evident. Reuters was offered a rare opportunity to visit the site earlier this year.

The campus has 15,000 employees working for Jio alone, plus hundreds of consultants and service providers working alongside the group. There are large guest houses and hotels.

In a single hall, Reliance has put on show everything from its e-payment mechanism and music-streaming app to its messaging app, sleek Jio smartphones—sold at a fraction of the cost of an iPhone—connected cars, and even a replica home.

“As they go out, they will have a very aggressive posture,” said Rajan Mathews, director general of the Cellular Operators Association of India.

On campus, Ambani, who flies in by helicopter once a week, was flanked at his desk by his eldest son, Akash, who is Jio’s head of strategy, and by Manoj Modi, a long-serving adviser, and a reminder of the influence of trusted employees, most from the oil business.

One company insider said the Jio logo is actually a mirror image of the word “oil,” reflecting in a way Reliance’s journey from oil drilling to data mining.