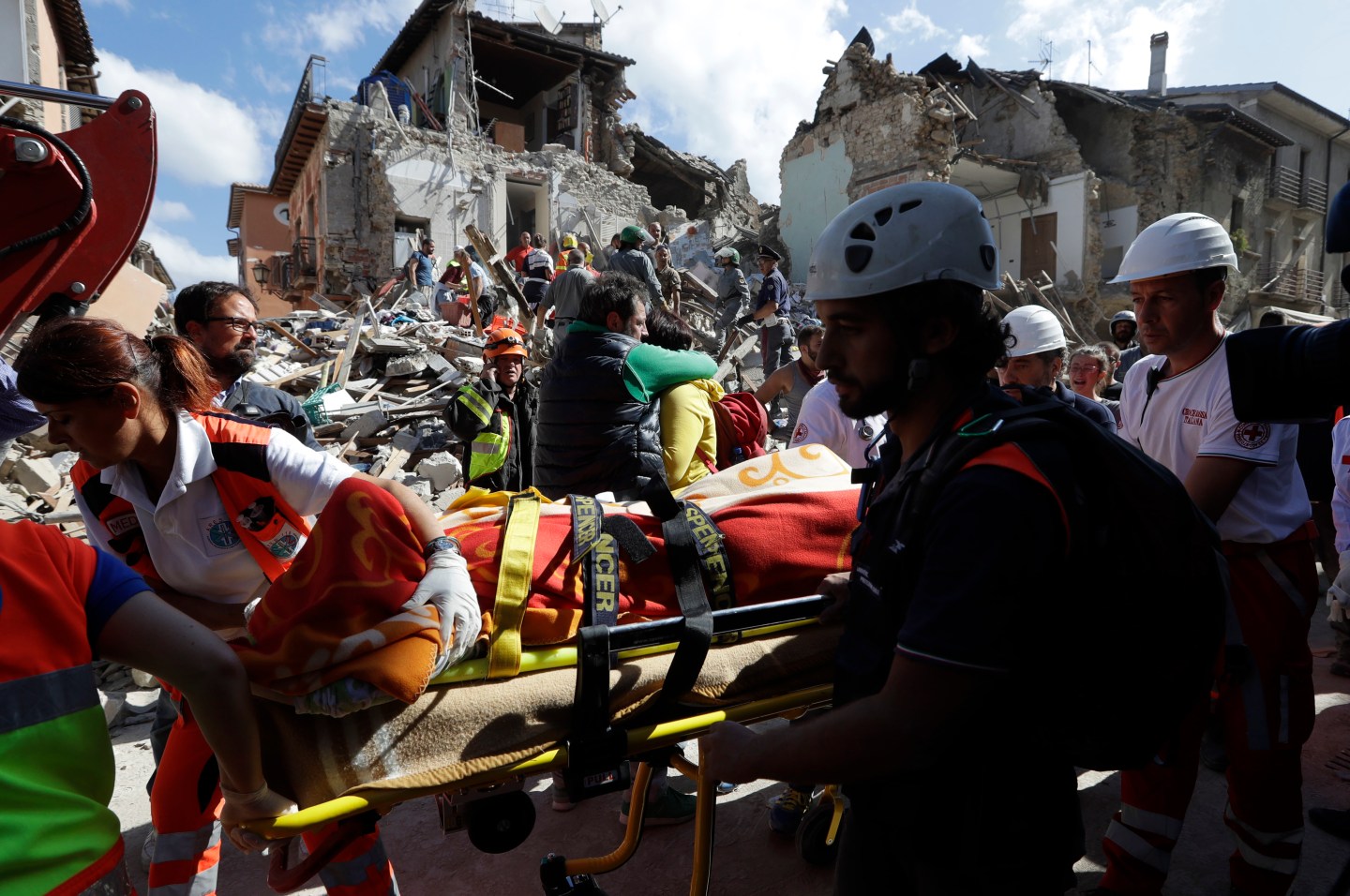 A victim is pulled out of the rubble following an earthquake in Amatrice Italy, Wednesday, Aug. 24, 2016. The magnitude 6 quake struck at 3:36 a.m. (0136 GMT) and was felt across a broad swath of central Italy, including Rome where residents of the capital felt a long swaying followed by aftershocks. . (AP Photo/Alessandra Tarantino)
Alessandra Tarantino — AP

Bulldozers with huge claws pulled down dangerously overhanging ledges Sunday in Italy’s quake-devastated town of Amatrice as investigators worked to figure out if negligence or fraud in building codes had added to the quake’s high death toll.

The quake that struck before dawn Wednesday killed 290 people and injured hundreds as it flattened three medieval towns in central Italy. Giuseppe Saieva, the prosecutor in the regional capital of Rieti, said the high human death toll “cannot only be considered the work of fate.”

Investigations are focusing on a number of structures, including an elementary school in Amatrice that crumbled despite being renovated in 2012 to resist earthquakes at a cost of 700,000 euros ($785,000). No one was in the school at the time, but many were shocked that it did not withstand the 6.2 magnitude quake.

After an entire first grade class and teacher were killed a 2002 quake in San Giuliano di Puglia, Italian officials had vowed to ensure the safety of schools, hospitals and other critical institutions.

Everything We Know About the Earthquake in Central Italy

Questions also surround a bell tower in Accumoli that collapsed, killing a family of four sleeping in a neighboring house, including a baby of 8 months and a 7-year-old boy. That bell tower also had been recently restored with special funds allocated after Italy’s last major earthquake, which struck nearby L’Aquila in 2009.

“This risk of infiltration is always high,” he said in comments Sunday in the La Repubblica newspaper. “Post-earthquake reconstruction is historically a tempting morsel for criminal groups and colluding business interests.”

Roberti said, although he does not wish to prejudge the outcome of the investigation into the area’s damaged buildings, the high number of public buildings to collapse in the quake raises suspicions.

He said if buildings are well-constructed according to regulations for earthquake zones, “parts of buildings can be damaged and cracked but they don’t pulverize and implode.”

L.A. Is Mandating Thousands of Earthquake Retrofits for Old Buildings

Italy’s state museums, meanwhile, embarked on a fundraising campaign, donating their proceeds Sunday to relief and reconstruction efforts in the earthquake zone.

Wednesday’s quake destroyed not only private homes but also churches and other centuries-old cultural treasures. The idea is to use art for art — harnessing the nation’s rich artistic heritage to help recover and restore other objects of beauty in the hard-hit towns.

It’s one of several efforts that have sprung up to help the towns rebuild: restaurants in Italy and elsewhere are also serving up pasta all’Amatriciana, the region’s most famous dish, in another fundraising effort.

Also Sunday, Pope Francis vowed in his weekly address from a window over St. Peter’s Square to visit people of the earthquake region soon and bring them “the comfort of faith.”

Amatrice bore the brunt of earthquake’s destruction, with 229 fatalities and a town turned into rubble and dust. Eleven others died in nearby Accumoli and 50 more in Arquata del Tronto, 10 miles (16 kilometers) north of Amatrice.

Chefs Around The World Are Aiding Earthquake Victims In Italy

Overnight was relatively calm, the first since the quake struck without strong aftershocks. In all, the region has seen 1,820 aftershocks, according to the National Institute of Geophysics and Volcanology.

On Saturday, a state funeral took place for 35 of the victims in the town of Ascoli Piceno, where mourners prayed, hugged, wept and even applauded as coffins carrying earthquake victims passed by ahead of being buried.

“It is a great tragedy. There are no words to describe it,” said Gina Razzetti, a resident at the funeral.

Saturday’s funeral involved most of the dead from Arquata del Tronto. Many of the dead from Amatrice, however, are still awaiting identification in a refrigerated morgue in an airport hangar in Rieti, 65 kilometers (40 miles) away. On Tuesday, a memorial service — without the bodies — will be held for the dead of Amatrice.

Nobody has been found alive in the ruins since Wednesday and hopes have vanished of finding any more survivors. The number still missing is uncertain, due to the many visitors seeking a last taste of summer in the Apennine mountains.

Hundreds of people have also been left homeless by the quake, with many spending their nights in tent cities and a gym in Amatrice. Longer-term housing needs for earthquake survivors will be another key challenge for Italian authorities.