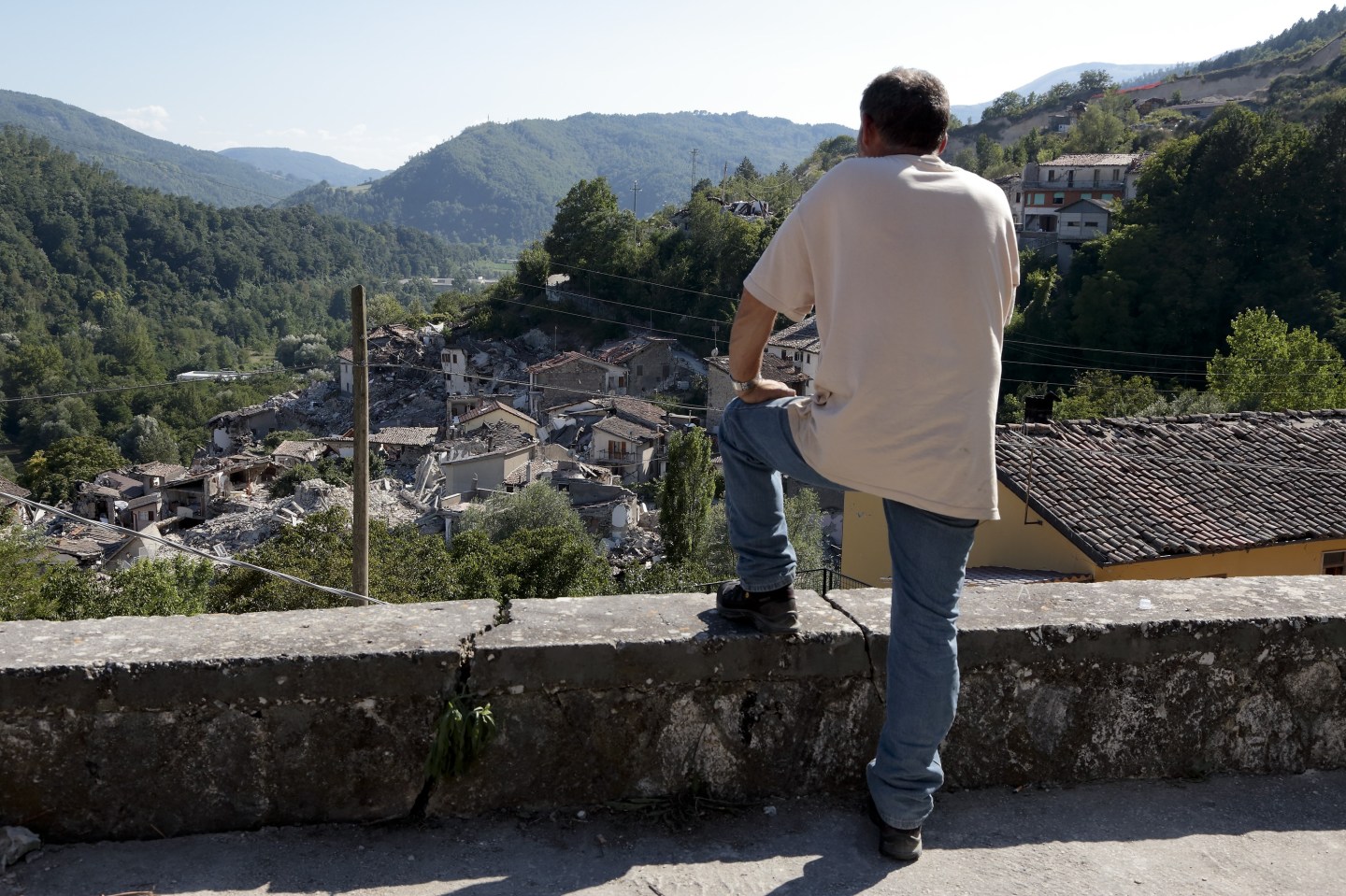 PESCARA DEL TRONTO, ITALY - AUGUST 25: A man looks damaged buildings after a strong earthquake hit Pescara del Tronto, Italy on August 25, 2016. Italy was struck by a powerful, 6.2-magnitude earthquake in the night of August 24, 2016, which has killed at least 247 people and devastated dozens of houses in the Lazio village of Pescara del Tronto, Accumoli and Amatrice.
Photograph by Alessio Paduano—Anadolu Agency/Getty Images

They say cooking is a labor of love, and celebrity Chef Jamie Oliver is helping to prepare lots of it for Central Italy’s earthquake victims this week.

Oliver is one of 600 chefs around the world to join an aid campaign for survivors in the small Italian town of Amatrice—located about 88 miles northeast of Rome—which was decimated by the Wednesday 6.2 magnitude quake that’s killed at least 250 people to date, according to CNN.

Amatrice is famous for a pasta dish called spaghetti all’Amatriciana, which was invented there in the 17th century. To honor and aid the town’s victims, Oliver and other chefs are adding the signature item—made with tomato-based sauce, white wine, olive oil, and pecorino cheese, as well as pork jowls and chili—to their menus, donating two euros ($2.26) for every sale to the Red Cross for earthquake victims in Amatrice. The campaign was conceived by Rome-based blogger Paul Bell.

The “Naked Chef” posted a picture of the dish on his Instagram account to promote the campaign.

Hi guys in support of the victims of the earthquake in Italy me and my 700 chefs at Jamie's Italian are cooking the specific dish from the area "Pasta Amatriciana" it will be on the specials board tonight at @jamiesitalianuk for a month £2 pound from each dish will go straight to the international red cross and I think we can easily make thousands and thousands of pounds to help…. Many restaurants are getting involved and this could really make a difference, money will go to supporting to Fire Fighters in the digging set up of tent camps for homeless and provision of food and clothing and medical assistance to people injured, old, kids, pregnant. Sadly this activity will run for months to come as it will take time to relocate people in new accomodations. But we can support for the same time – every bit of help will count big love to all and big love from me and my teams to our Friends in Italy we love you x X X X X 🇮🇹🇮🇹🇮🇹🇮🇹🇮🇹🇮🇹🇮🇹🇮🇹🇮🇹🇮🇹🇮🇹🇮🇹🇮🇹🇮🇹 #eatforitaly @elbi #terremotocentroitalia #every1counts

“I think we can easily make thousands and thousands of pounds [of the pasta] to help,” Oliver wrote. “Many restaurants are getting involved and this could really make a difference.”

Stefania Proietti, the mayor of Assisi, told me Assisi restaurants would donate €2 from every pasta all'amatriciana to quake aid efforts!

“In the next few days, let’s [all donate] a euro for every plate of Amatriciana sauce ordered and consumed,” he posted along with the hashtag “#SaveAmatrice.”

A 4.1 magnitude aftershock rattled the region Thursday as emergency crews worked feverishly to dig out survivors buried in the rubble of once-standing buildings and homes. Amatrice Mayor Sergio Pirozzi told CNN that “The town is no more.”