What Comes Next for Ryan Lochte and the U.S. Swimmers in the Rio Robbery Case 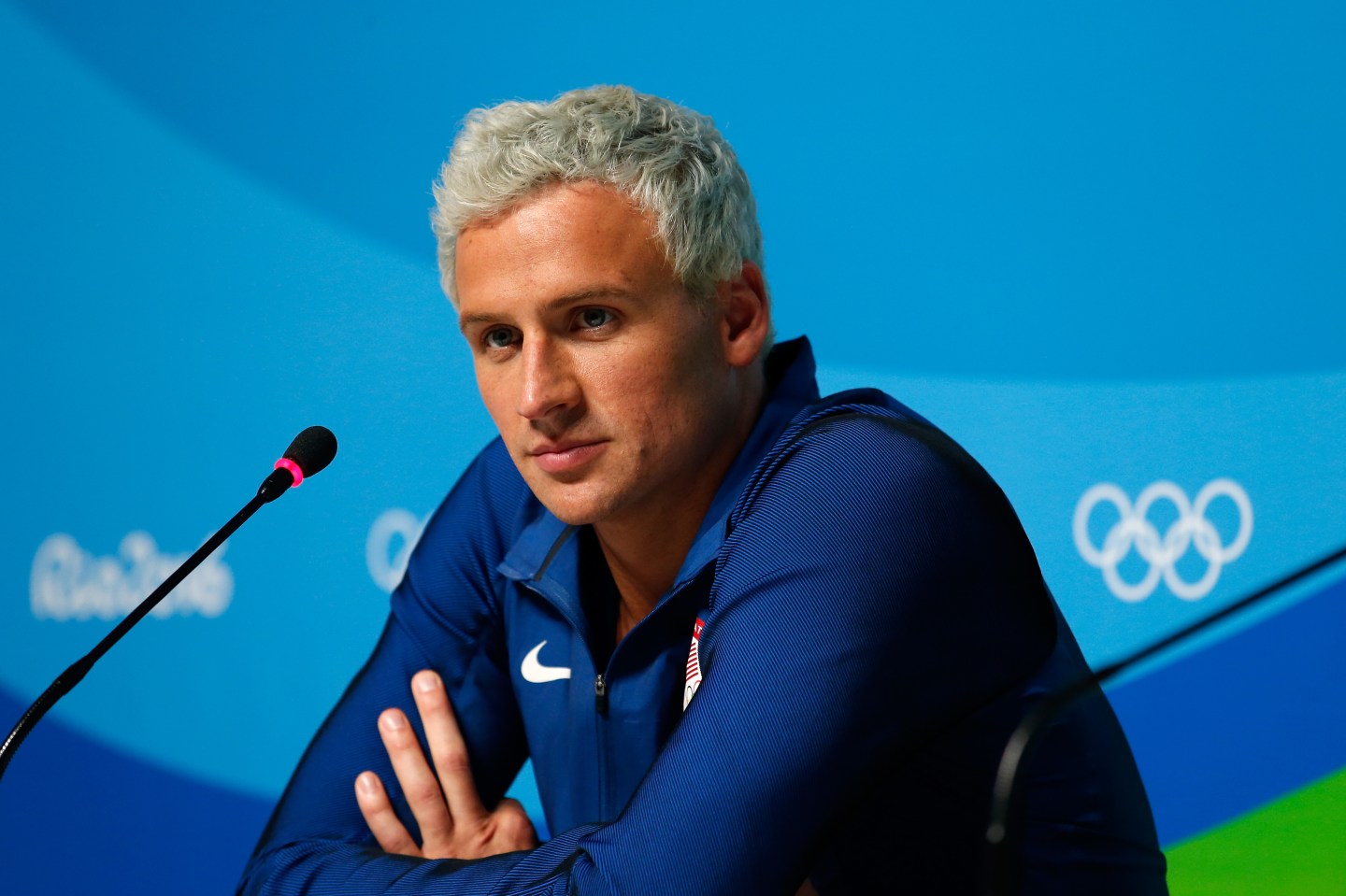 Ryan Lochte of the United States attends a press conference in the Main Press Center on Day 7 of the Rio Olympics on August 12, 2016 in Rio de Janeiro, Brazil.
Photograph by Matt Hazlett — Getty Images

In a dramatic twist to the mysterious story about four U.S. Olympian swimmers who claim they were robbed in Rio de Janerio, Brazilian officials on Wednesday evening removed Jack Conger and Gunnar Bentz from a plane scheduled to fly to the U.S. from Rio International Airport. Early on Sunday morning, these two swimmers, along with teammates Ryan Lochte and Jimmy Feigen, say they were robbed at gunpoint. They reportedly told law enforcement that four men dressed as Rio police officers forced the swimmers to leave a taxi. Lochte told NBC’s The Today Show that one of the assailants cocked a gun and placed it next to his forehead.

The alleged assailants then robbed the swimmers of their wallets and cash. However, other items of substantial value, such as watches, phones and apparel, were not taken. Some have speculated that if a robbery indeed took place, the assailants would have surely grabbed those items as well. On the other hand, it is possible the would-be assailants may have been in a rush to avoid arrest and left taking only some of the swimmers’ belongings.

Video obtained by The Daily Mail purportedly shows the four swimmers returning to the Olympic Village after the alleged robbery. The four men do not appear as distressed as one might expect after enduring such a harrowing experience. It should be noted, however, that video evidence can be misleading and distortive. Plus, if the swimmers were intoxicated, they might not have appeared as upset by the robbery as they would have seemed if sober.

Rio police have not been able to corroborate that any robbery took place. On Wednesday, Brazilian judge Keyla Blank ordered that law enforcement seize the passports of Lochte and Feigen and question the swimmers about the incident. Lochte, however, is back in the U.S. The whereabouts of Feigen are uncertain at this time, although some reports indicate he is still in Brazil.

Let’s assume, for a moment, that no robbery took place. Now put yourselves in the shoes of the Rio police. A story that has attracted global headlines posits that four assailants were able to disguise themselves as Rio police officers—along with official looking Rio police badges—stop a taxi on a public road, force out the car’s occupants, point guns at them, and then rob four Olympians of their wallets—and get away with it. It is a story that embarrasses the Rio police as vulnerable to impersonation, incapable of stopping crime and unable to solve crimes that occurred. The story also perpetuates a popular narrative or prejudice that Rio is unsafe and rife with crime. In this scenario, the Rio police would have good reason to be upset with the swimmers.

Continuing with an assumption that no robbery took place, the swimmers may have violated Brazilian law by knowingly filing a false police report. Under Brazilian law, such a crime can lead to a jail sentence of up to six months or a fine. There are many reasons why filing a false police report is a criminal act in Brazil, just as it is a criminal act in the United States and across the world. A false police report can lead to an arrest of a completely innocent person. Such a report also wastes the time and energies of police officers that they would otherwise be able to devote to preventing and solving real crimes.

To be sure, if the swimmers were intoxicated when they spoke with police, they may not have “knowingly” lied. Instead, they may have been drunk and not thinking clearly. But it would be up to the Brazilian judicial system to make that determination.

Although the United States and Brazil have signed and ratified an extradition treaty, it is almost inconceivable that the terms of this treaty would compel Lochte to return to Brazil.

For starters, Lochte has not yet been charged with a crime. No extradition procedure would commence if and until that happens.

Assuming Lochte is charged with a crime, the U.S.-Brazil extradition treaty is applicable only to a specific list of criminal acts. Article II of the treaty lists those acts, and they include such crimes as murder and rape. Filing a false police report, however, is not one of the criminal acts listed.

Further, a citizen can fight extradition by claiming that the criminal charges are motivated by political considerations rather than justice. Here, Lochte would insist that Brazil is trying to make an example out of him because he is a high-profile figure. While such an argument might not persuade a Brazilian judge, it could have traction with the U.S. judge who would need to approve Lochte’s extradition.

Along those lines, extradition is a lengthy and complicated process that can fail at different moments. If Brazil petitioned the U.S. government to extradite Lochte, the petition would need to be approved by the State Department’s Office of the Legal Adviser, the Justice Department’s Office of International Affairs and a federal judge. There are many steps where the petition could end.

In short, if Brazil deems Lochte a fugitive, don’t expect the United States to turn him over.

Conger and Bentz Could Be Detained in Brazil for Some Time

Conger and Bentz—and perhaps Feigen, too, if he’s still in Brazil—are not nearly as fortunate as Lochte. They are not free to leave the country without the blessing of Brazilian authorities. When a U.S. citizen travels to a foreign country, he or she is subject to the laws and judicial system of that country. Conger and Bentz are about to learn more about that point.

The most likely course of action for Conger and Bentz is that Brazilian law enforcement will ask questions to Conger and Bentz about the alleged robbery and demand they provide testimony in response to those questions. Conger and Bentz will likely retain local legal counsel before answering any questions. Both the U.S. Consulate General in Rio and the U.S. Olympic Committee can assist the swimmers in securing attorneys. If Brazilian authorities conclude that Conger and Bentz filed a false police or committed a similar crime, such as obstruction of justice, the swimmers would likely be charged.

Assuming any charges for relatively minor crimes (filing a false police report would fall into that category), the swimmers would be given an opportunity to post bail. The Brazilian judge, however, would likely condition bail on assurance that the swimmers do not leave Brazil until their case is complete. That could mean the swimmers stay in Brazil for weeks or months.

Critical Role of the U.S. Department of State

Particularly given the high profile nature of this dispute, expect the U.S. Ambassador to Brazil, Liliana Ayalde, to play a role in trying to resolve it as expeditiously as possible. The United States and Brazil have a positive and productive relationship. Brazil, in fact, is the ninth largest trading partner of the U.S. It would behoove both countries to avoid an international crisis over a robbery that may or may not have happened. Expect cooler heads to prevail and for the situation to be resolved amicably. Whether the resolution is found in a matter of days, weeks or months remains to be seen.

Why Would the Swimmers Lie about the Robbery?

This is the million-dollar question. When individuals falsely claim that they are victims of crime, there are often obvious reasons why they lied. Sometimes it is for attention. Other times it is for money. Occasionally it is to cover up a crime or an unethical act. None of these reasons, however, seem in play here and that is a point in favor of the swimmers.

After all, these four swimmers, especially Lochte, are not exactly in need of media attention—they are Olympians and Lochte is a celebrity. It’s also not clear how spinning a tale of a random Rio robbery would lead to riches. Their story, while newsworthy, is not so unique or compelling that movie deals are likely in the works. Covering up a crime also doesn’t seem likely given what we know about the alleged robbery.

It is thus very possible that the swimmers are indeed telling the truth. For the sake of Conger and Bentz let’s hope the Brazilian authorities agree.

Michael McCann is a legal analyst and writer for Sports Illustrated. He is also a Massachusetts attorney and the founding director of the Sports and Entertainment Law Institute at the University of New Hampshire School of Law. McCann also created and teaches the Deflategate undergraduate course at UNH. He serves on the Board of Advisors to the Harvard Law School Systemic Justice Project and is the distinguished visiting Hall of Fame Professor of Law at Mississippi College School of Law. He is also on the faculty of the Oregon Law Summer Sports Institute.