How GlaxoSmithKline Is Changing the World 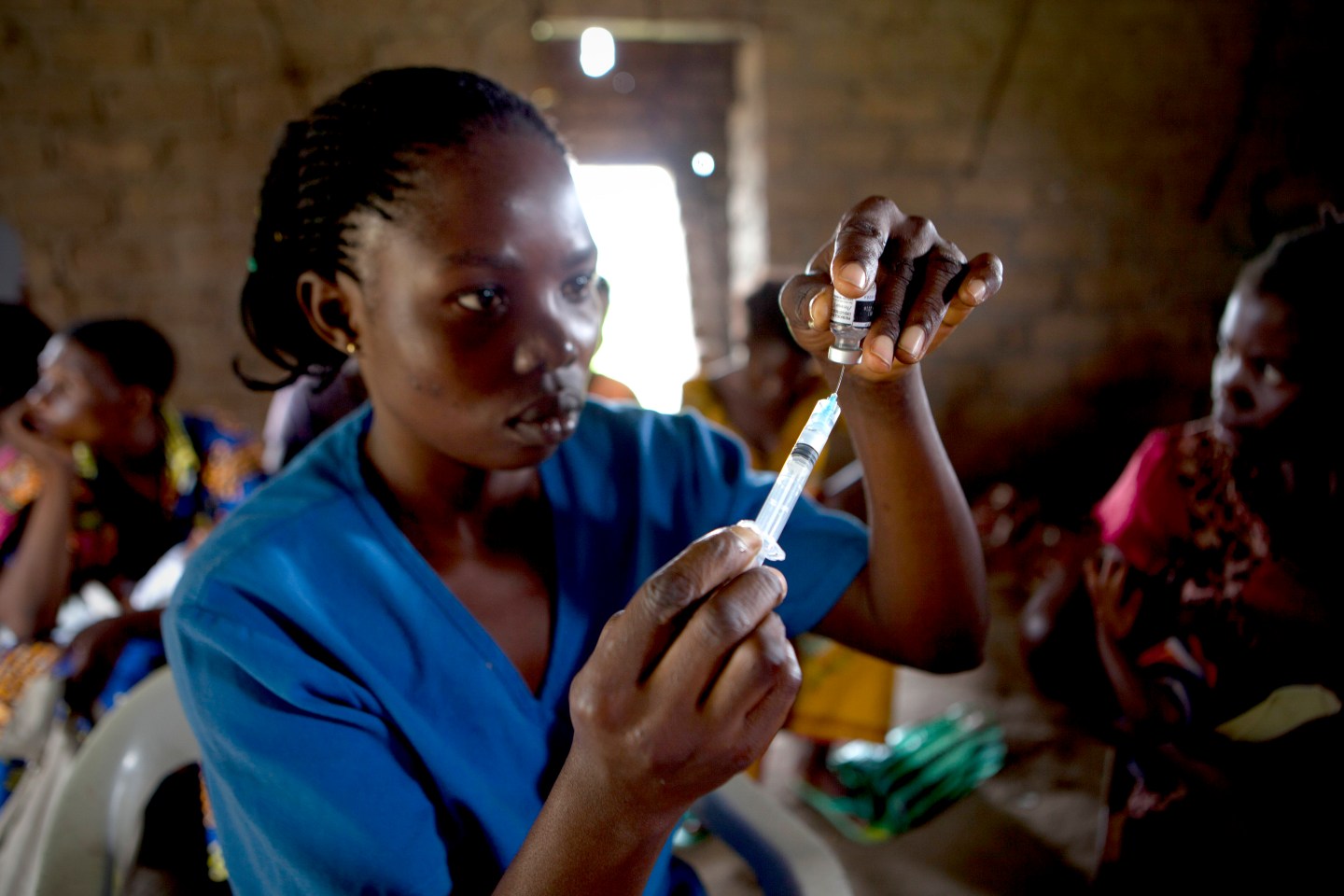 A health worker vaccinated children at Ba Kwasumba Health Centre, Cilundu Health Zone, Kasai Oriental Province, DRC. Save The Children and GSK have together successfully created a vaccination programme against preventable diseases for children under 5.GSK’s PRIME project beginning in 2014 will provide essential free medicines and equipment to under equipped Health Centres in DRC. GSK PRIME will improve access to health services through refurbishing health centers, training, equipping and supporting frontline health workers and driving a demand for health services from communities where children currently have no access to health care. DRC is one of the worst countries in the world to be a mother or a child. One in five children die of preventable diseases before reaching their 5th birthday. PRIME will contribute to the wider Save The Children Health Signature Programme in DRC.
Ivy Lahon — Save The Children

The staff of Fortune and a panel of experts recently named 50 companies to its 2016 Change the World List. GSK is one of them.

Early next year, if all goes according to plan, Sir Andrew Witty will step down after nine years as CEO of GlaxoSmithKline (GSK), the world’s sixth largest pharmaceutical company. He’ll leave behind a company with an unmatched record for balancing scientific progress, social impact and the profit motive.

GSK has made a calculated bet on intellectual property leniency in poor nations, releasing drugs from patent protection and thus lowering their prices. That may depress revenue, but GSK says it doesn’t lose money in any market where it operates. And over time the approach builds goodwill and a strong market presence around the globe. “GSK has existed for 300 years,” Witty tells Fortune. “We think about how we can be successful, not just in the next year or the next two years, but in the next 10, 15, 20, 30, 40 years.” The near term looks good: GSK’s revenue grew 4% in the second quarter of 2016, as new product sales crossed the $1.5 billion threshold for the first time.

In March, GSK announced that it will no longer file drug patents in the lowest-income regions of the world—an integral part of its patient access strategy. The company is hardly a passive partner in these regions, however. GSK reinvests 20% of any profits it makes in the least developed countries into training health workers and building medical infrastructure. For instance, through a partnership with the NGO Save the Children, the drugmaker has trained locals to properly administer vaccinations and screen for conditions like malnutrition. ViiV Healthcare, an HIV therapy unit majority owned by GSK, struck a landmark deal with the government of Botswana in June to make the HIV drug Tivicay available as part of a national program to test and treat as many people as possible. And the company has strengthened its commitment to vaccine development, including the world’s first malaria vaccine, which could curb a disease that kills more than half a million people a year.

GSK has also leveraged products from its formidable consumer health business into medical solutions, creating the umbilical cord infection-fighting Umbipro gel out of a component in one of its mouthwashes. The product doesn’t need refrigeration and could save 85,000 babies per year, according to United Nations.

A version of this article appears in Fortune’s September 1 issue as part of the Fortune Change the World List, our annual ranking of major companies whose business activities are having a positive social impact. Click here to see the entire package.