Obama Still Has a Shot at Passing the TPP 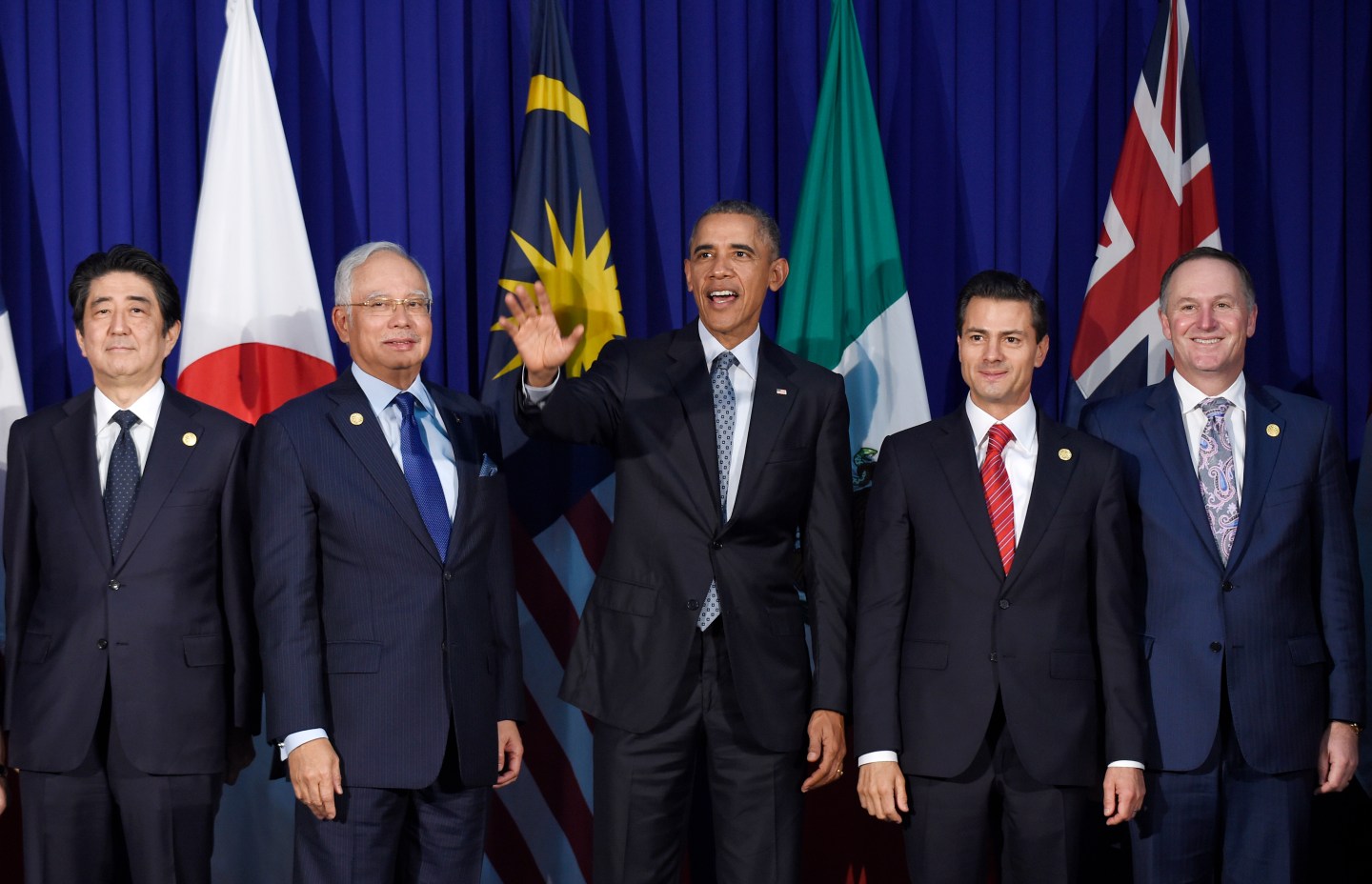 President Barack Obama, center, and other leaders of the Trans-Pacific Partnership countries pose for a photo in Manila, Philippines, Wednesday, Nov. 18, 2015, ahead of the start of the Asia-Pacific Economic Cooperation (APEC) summit. (AP Photo/Susan Walsh)
Photograph by Susan Walsh — AP

Alan Wm. Wolff is an international trade lawyer with Dentons LLP, in Washington, DC, and a former senior negotiator in Republican and Democratic presidential administrations.

Given that the two contenders for the U.S. presidency are strongly against free trade agreements, you would think that they are reflecting the views of the American people. They are not. In a Pew Research Center survey taken in March, 51% of Americans said that free trade agreements have been a good thing, versus 39% against them.

Given the public’s support for free trade, it’s hard to see why the candidates would oppose the Trans-Pacific Partnership (TPP), a landmark deal involving the U.S. and 11 other nations across the Pacific Rim. President Barack Obama has been an avid supporter of the deal; in the coming months, he has an opportunity to implement the agreement that the U.S. signed last year by leveraging his lame-duck period in office—that is, in the weeks just before the newly elected president takes over.

Admittedly, there is not a lot of time. The longest lame-duck session lasted 58 days in 1941, and the country going to war had a lot to do with its duration. Lame-duck sessions are typically half that amount of time, about a month. And during that short period, the U.S. Congress will have other key priorities, such as spending bills, to consider. So what can be done?

Procedurally, the bill to implement the agreement could be rather simple because there is not very much that needs to be changed in U.S. law. That is because the agreement is largely about setting the rules for the conduct of international trade, and U.S. laws and practice are largely in sync with what the TPP requires. As for U.S. tariffs, these are already very low, and the reductions are similarly either minimal, or in a few cases like with automobiles and auto parts, stretch out over decades.

It is largely not the tariff cuts that stand in the way of a vote. If Obama wants to convince Congress to implement the TPP, he’ll need to address the following concerns:

No trade agreement can fully address the problems U.S. workers face today. Automation has dramatically reduced manufacturing jobs, but it is trade that is taking the political heat for adverse effects on employment. What is needed now is an infrastructure bill to provide more and better jobs (as well as to repair the dilapidated aging national infrastructure that is making the U.S. less internationally competitive) and a strong worker training program, far beyond any program currently in effect.

U.S. intellectual property needs to be adequately protected at a high standard. This is a strong interest of the chairman of the Senate Finance Committee, especially with respect to biologic drugs, in which the U.S is a world leader. Meeting this concern is a key to moving forward with the TPP. In addition, increased spending for research and development will pay dividends for the U.S. economy and enhance future economic growth.

A means is needed to combat future currency manipulation by America’s trading partners. Fred Bergsten, a former senior U.S. Treasury official, has testified before Congress that hundreds of thousands of American jobs have been lost due to the trading advantage that foreign government intervention in currency markets has created. According to Bergsten, the U.S. needs to step in and buy foreign currencies in countries that choose to sell them in an effort to lower their values. Congress can provide the resources to make sure currency manipulation does not cost American jobs again, as it has in the past. Clear commitments are needed from America’s trading partners to assure their full implementation of the TPP, particularly where legislation is needed to modify existing laws.

Getting the TPP passed would be a major legacy not just for President Obama, but also for this Congress. No one can say that it is impossible to accomplish these objectives. Failure is likely to damage America’s image as a world leader and the U.S. economy, as the next administration and Congress take the time they will need to decide the country’s policy priorities.