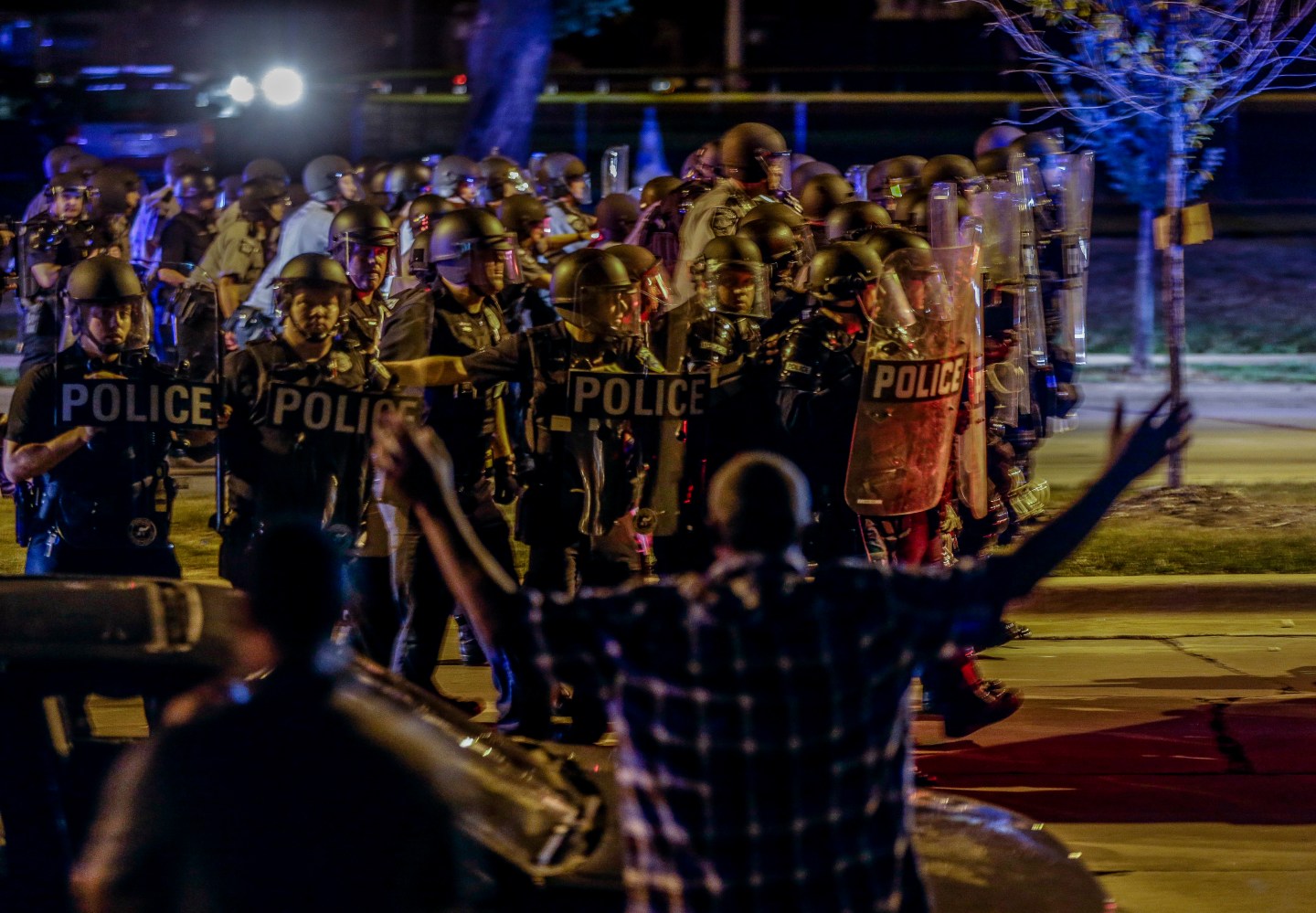 Police move in on a group of protesters throwing rocks at them in Milwaukee, Sunday, Aug. 14, 2016. Police said one person was shot at a Milwaukee protest on Sunday evening and officers used an armored vehicle to retrieve the injured victim during a second night of unrest over the police shooting of a black man, but there was no repeat of widespread destruction of property. (AP Photo/Jeffrey Phelps)
Jeffrey Phelps — AP

Protesters fired gunshots, hurled bricks and set a gas station on fire in the U.S. mid-western city of Milwaukee on Saturday night, hours after a patrol officer shot and killed an armed suspect who took flight after a traffic stop, authorities said.

The 23-year-old suspect, who had a lengthy arrest record, was carrying a stolen handgun loaded with 23 rounds of ammunition when police pulled over the vehicle for unspecified “suspicious activity,” authorities said. A second suspect who fled from the vehicle was quickly taken into custody.

A statement by the Milwaukee Police Department did not say whether the suspect who was killed had fired any shots or pointed the weapon at officers during the incident. Authorities did not disclose the race or the name of the suspect or the uniformed officer.

Later, a crowd of more than 100 people in the predominately African-American section of the city where the shooting occurred hurled rocks as police officers in riot gear attempted to disperse the protesters.

Two Years After Ferguson, What Has Changed?

Authorities said gunshots were fired during the disturbance. The windows of at least two squad cars were smashed, and one officer sitting inside one of the vehicles was hit in the head with a brick.

Protesters set a police car ablaze and fires broke out at gas station, an auto parts store and at least three other businesses, officials and local media reported.

“Our city is in turmoil tonight,” said Alderman Ashanti Hamilton, president of the Milwaukee Common Council.

“This is a neighborhood that has been unfortunately affected by violence in the recent past,” Barrett said, referring to a smaller disturbance a month earlier. “There are a lot of really, really good people who live in this area … and can’t stand this violence.”

In a City of Unsolved Murders, Freddie Gray’s is Now One More

The unrest follows peaceful protests and some violence in U.S. cities over the past two years following high-profile killings by law enforcement officers in Baltimore, New York and Ferguson, Missouri.

Outrage over police violence toward minority groups has given rise to the Black Lives Matter movement and touched off a national debate over the race issue and policing in the United States.

“This is a warning cry,” Milwaukee Alderman Khalif Rainey said. “Black people of Milwaukee are tired. They are tired of living under this oppression.”

As of 1 a.m. Central time, police said three arrests had been made in connection with the unrest.

Shortly after 2 a.m. police said they were restoring order to the area and reducing deployments, but local news footage also showed a liquor store in flames just minutes before the release of the statement.

The officer involved in the shooting is 24 years old and a six-year veteran of the force, police said. He was placed on administrative duty until an investigation and subsequent review by the Milwaukee County District Attorney’s Office is complete, a standard practice after shootings by law enforcement officers.