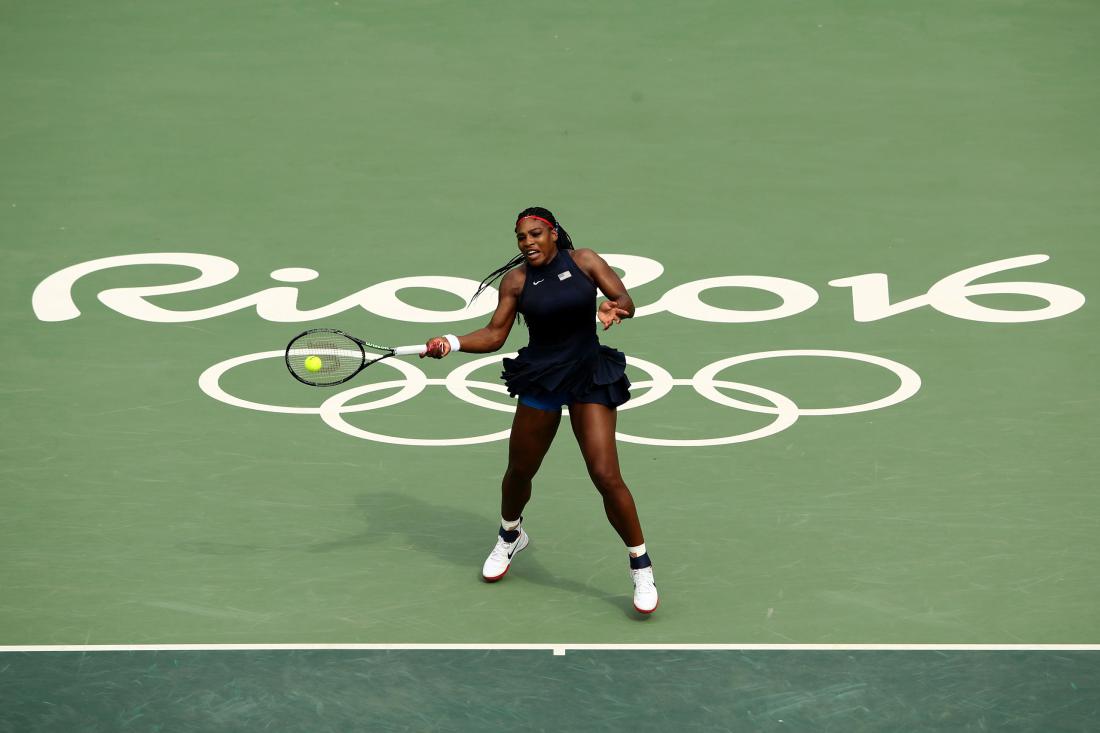 RIO DE JANEIRO, BRAZIL - AUGUST 07: Serena Williams of the United States plays a forward against Daria Gavrilova of Australia in their first round match on Day 2 of the Rio 2016 Olympic Games at the Olympic Tennis Centre on August 7, 2016 in Rio de Janeiro, Brazil. (Photo by Cameron Spencer/Getty Images)
Cameron Spencer Getty Images

Perhaps it was the 25 mph winds. Or the slower-than-expected hard courts. Or maybe simply that Serena Williams hadn’t played a match in a month.

Whatever the cause, Williams opened defense of her Olympic singles gold medal with a patchy-at-times 6-4, 6-2 victory over Australia’s Daria Gavrilova on Sunday, gesturing or yelling at herself as she often does when not all goes her way.

“I’m always frustrated on the court if it’s not perfect,” the American said.

Williams had not competed since collecting her Open-era record-tying 22nd Grand Slam title at Wimbledon. She’s now won 19 of her past 20 matches.

Seeded No. 1 at the Rio de Janeiro Games, Williams was hardly at her best in the 91-minute contest against Gavrilova, who is ranked 46th and only once has been past the second round at a major tournament.

While that match was played in the main stadium, action was delayed because of strong winds for about 2 hours on the eight smaller Olympic courts.

“I was a little nervous about that,” Williams said of her reaction to hearing of the gusty conditions, which she called “very intense.”

Williams compiled 37 unforced errors to 27 winners, and got broken at love while serving for the first set at 5-3, a game that included a tremendously entertaining point.

The lengthy exchange featured terrific defense by both women and ended with Williams putting a forehand into the net. Afterward, she leaned over near the net, while Gavrilova dropped to her knees on the court, letting go of her racket.

But Williams broke right back in the next game to take the set.

“The first set, especially, was extremely tricky,” Williams said, referring to the wind, “but I’m glad it kind of slowed down in the second a little bit, so I was able to produce better tennis.”

How to Watch Olympic Gymnastics at the Rio Games

Players have noticed that the green courts in Rio play slower and offer higher bounces than hard courts used on the North American circuit leading to the U.S. Open later this month.

“Fortunately enough, I am a pretty good clay-court player, so I’m OK with the slow courts,” said Williams, a three-time French Open champion. “You have to hit about three or four more shots or just play a little bit better. It’s OK. I’m getting used to the conditions as a whole.”

She was scheduled to play doubles with her older sister Venus later Sunday. U.S. Tennis Association spokesman Tom LaDue said that Venus would participate in that match despite being sick.

On Saturday night, Venus’ availability for doubles was put in doubt by U.S. women’s tennis coach Mary Joe Fernandez, who said the four-time gold medalist and seven-time Grand Slam champion had cramping, dehydration and an upset stomach following a first-round loss in singles.