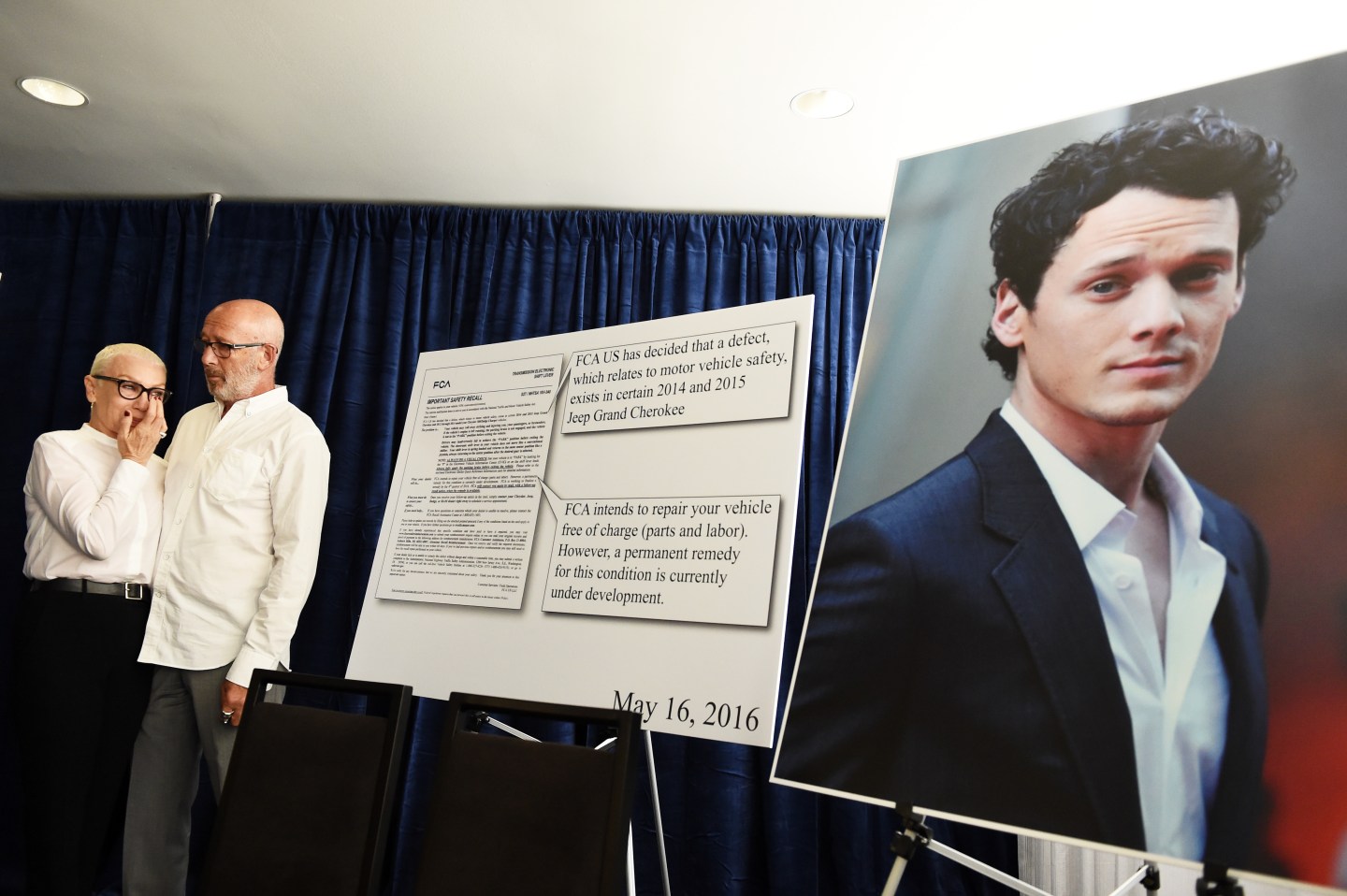 The parents of Star Trek actor Anton Yelchin are suing Fiat Chrysler (FCAU), which made the Jeep that rolled down their son’s driveway and crushed him to death, they said Tuesday at an emotional news conference.

Irina Yelchina and Victor Yelchin, who filed a wrongful death lawsuit, wiped away tears as they described to reporters in Los Angeles the “hell” they are going through after the loss of their 27-year-old son.

“In spite of our unbelievable grief, we decided to come here to prevent other families from the same tragedy,” the actor’s father Victor Yelchin said. “Anton was our only son, and he was a remarkable human being — very modest, very simple, very honest, generous, loving.”

“It is wrong, it’s against nature, when the parents bury its own child,” he added. “That’s why we hope that this lawsuit will make [another] family never go through the same hell we’re going through right now.”

Anton Yelchin died in an accident in June after his 2015 Jeep Grand Cherokee crushed him in his driveway, authorities said. When he got out of his SUV, it rolled backward down a steep driveway and pinned him against a brick mailbox and a security fence, according to Los Angeles Police Department spokeswoman Jane Kim.

The young rising star played Chekov in the rebooted Star Trek trilogy. “We were always proud of him being the greatest human being, not a star,” his mother said, calling him a “beautiful human being.” “The world is really missing him,” she added. “It’s not right that he’s not here.”

The vehicle that killed her son was part of a safety recall the government issued two months ago. The National Highway Traffic Safety Administration (NHTSA) in late April warned drivers of a defect in the model, involving its monostable gear selector.

The electronic shifter, which has a button to change gears instead of requiring drivers to physically move a lever, could cause drivers to mistakenly believe their vehicle is in park, when it is actually in neutral or drive, the federal safety agency said.

“Drivers erroneously concluding that their vehicle’s transmission in the park position may be struck by the vehicle and injured if they attempt to get out of the vehicle while the engine is running and the parking brake is not engaged,” the NHTSA said in its safety recall report.

Fiat Chrysler, in a new statement, said the company “extends its sympathies to the Yelchin family for their tragic loss.” Fiat said it could not comment further because it has not been served with a lawsuit.

Attorney Gary Dordick, who is representing the Yelchin family, said the actor’s parents want Fiat to be held accountable for the tragedy. “We hope this lawsuit will teach them a lesson,” he said.