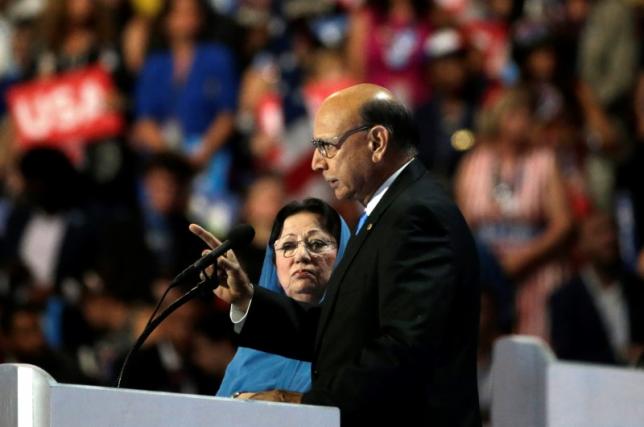 The parents of a Muslim soldier killed in Iraq accused Republican presidential candidate Donald Trump of ignorance for his criticism of them after their appearance at the Democratic National Convention.

Ghazala Khan, mother of slain U.S. Army Captain Humayun Khan, took up her own defense on Sunday in an opinion piece in the Washington Post that explained why she stood without speaking on the DNC stage last week as her husband castigated Trump for his comments about Muslims.

“Donald Trump said that maybe I wasn’t allowed to say anything. That is not true,” Mrs. Khan wrote.

She described how her family came to the United States from Pakistan after enduring the 1965 Indo-Pakistani War, of her son’s lifelong patriotism, and how she decided not to speak at the convention because of her pain over Captain Khan’s 2004 death. “Walking onto the convention stage, with a huge picture of my son behind me, I could hardly control myself. What mother could?” she wrote.

Mrs. Khan added, “Donald Trump has children whom he loves. Does he really need to wonder why I did not speak?”

Trump stirred bipartisan outrage for his back and forth with the Khans.

The Republican nominee lashed out at Khizr Khan, a U.S. citizen of Pakistani origin and a Muslim, when Khan told of his war hero son at the convention and took issue with Trump’s call for a temporary ban on the entry of Muslims into the United States.

Khizr Khan invited the Republican nominee to read the U.S. Constitution and visit the graves of American soldiers from many backgrounds at Arlington National Cemetery.

In an interview aired Sunday on ABC’s This Week, Trump cast doubt on why Khan’s wife did not speak.

“She was standing there, she had nothing to say, she probably, maybe she wasn’t allowed to have anything to say, you tell me,” Trump said.

Trump on Sunday tweeted that Khan’s son had died twelve years ago: “Captain Khan, killed 12 years ago, was a hero, but this is about RADICAL ISLAMIC TERROR and the weakness of our “leaders” to eradicate it!”

Captain Khan, killed 12 years ago, was a hero, but this is about RADICAL ISLAMIC TERROR and the weakness of our "leaders" to eradicate it!

Ghazala Khan responded in her Washington Post piece simply, “When Donald Trump is talking about Islam, he is ignorant.”

Both Democrats and Republicans have criticized Trump’s remarks about the Khans.

“Just when I think, Trump can’t possibly be a bigger jerk, he proves me wrong,” Republican strategist Ana Navarro said on Twitter (TWTR), adding that Trump’s comments about the Khans were “gross.”

Just when I think, Trump can't possibly be a bigger jerk, he proves me wrong. Picking on Cpt. Khan's mom is gross. https://t.co/9YIhP5XAgQ

Hillary Clinton, Trump’s Democratic rival in the Nov. 8 election, said at a campaign rally on Saturday that Trump’s comments about the Khans were part of a long history of insulting people.

Trump tweeted Sunday that he had been “viciously attacked” by Khan at the convention. “Am I not allowed to respond?” he asked. The candidate also tried to change the subject to the war itself: “Hillary voted for the Iraq war, not me!”

On CNN on Sunday, Khizr Khan said the couple had received a large outpouring of support after their appearance at the convention. He said people had apparently seen the “blackness” of Trump’s character, adding that Trump’s family needed to “teach him some empathy.”