Why Your Morning Coffee Is About to Become Even More Expensive 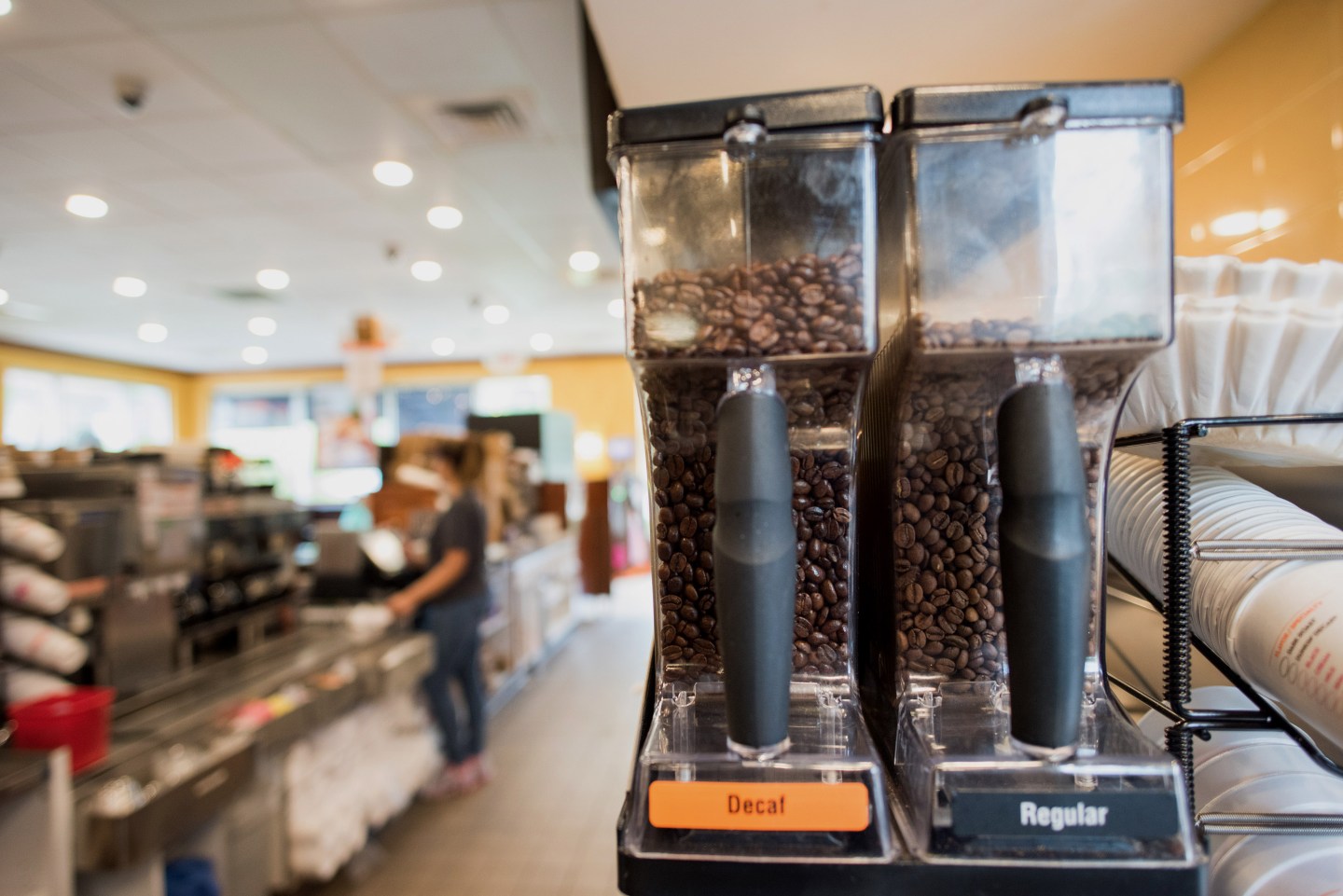 Coffee Beans sit in a container at a Dunkin' Donuts Inc. location in Ramsey, New Jersey, U.S., on Thursday, May 5, 2016. Dunkin' Brands Group Inc., a leading franchiser in the quick service restaurants (QSR) sector, operates in almost 60 countries around the world with more than 11,300 Dunkin' Donuts restaurants and 7,500 Baskin-Robbins locations. Photographer: Ron Antonelli/Bloomberg via Getty Images
Photo by Ron Antonelli/Bloomberg via Getty Images

Your morning cup of Joe may be about to get even pricier, a Reuters poll of 11 traders and analysts showed on Thursday.

By the end of this year, both arabica and robusta coffee are expected to hit their highest price since early 2015, driven by the global market’s first supply deficit in six years, along with firming currencies in top growing nations and strong demand for coffee.

That would be up 10 percent from Wednesday, and a whopping 30 percent jump from 2015, its biggest annual gain since 2010.

Prices of arabica coffee, used in espressos and brewed blends, will rally to $1.45 per lb by the end of the third quarter and to $1.60 by the end of the year, the median of estimates showed, with expectations ranging from $1.20 to $2.20.

That would be up 13 percent from Wednesday and a 26 percent increase from 2015.

While bean inventories in producing countries have already dwindled, the threat of frost in Brazil next year and rains in Vietnam due to the La Nina weather pattern could spur greater price gains, said Shawn Hackett, president of Hackett Financial Advisors in Boynton Beach, Florida.

“Any kind of major weather threat could send … coffee prices back up to retest the 2011 highs near $3 per pound,” he said.

Respondents said the Brazilian real, which rose to an 11-month high in June, was also likely to drive the market. A strong Brazilian real against the greenback discourages producer selling of the dollar-traded commodity.

The price forecasts mark a major about-turn from the outlook at the start of the year.

Respondents still expected demand to outpace supply in 2015/16, which would be the first time in six years according to U.S. Department of Agriculture data. They reined in their deficit forecasts from six months ago amid a bumper Brazilian harvest.

For 2016/17, a balance was forecast though estimates ranged from an 8 million bag deficit to a 10 million bag surplus.

Brazil is to harvest 55 million bags in 2016/17, as its arabica regions recover from a second year of drought. That compares with 43.2 million bags this year, according to the International Coffee Organization (ICO).