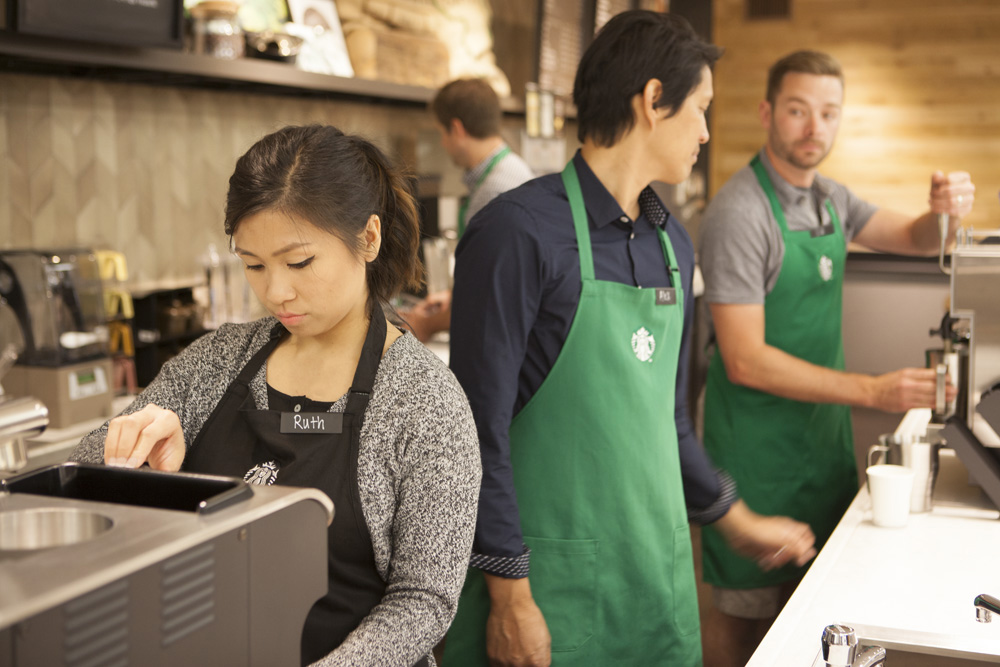 Starbucks says it is giving baristas more control of their personal style.

While the green aprons are here to stay, the restaurant chain says starting on Monday, it will enact expanded dress code guidelines across all of its U.S. and Canada stores. The new dress code goes beyond the traditional requirement that all clothes be black, white and khaki. Now, Starbucks (SBUX) is allowing additional shades including navy, gray and brown. Jeans in darker washes and hues are also allowed (previously, only dark black denim was allowed).

Fortune got a peek at the new standards, which will be shared with employees via a “Look Book.” Beyond the denim, another notable change is regarding hair color. Starbucks had banned unnatural hair colors like pink or purple. Now, the restaurant chain says, “If hair color is your style, it’s welcome,” with the Look Book even featuring a woman with dyed purple hair. But Starbucks adds hair color can’t have glitter, sprays or other temporary products (for food safety reasons).

Another interesting update: in addition to logo hats and caps, Starbucks is allowing employees to wear a fedora, bowler, and plain baseball caps, as long as they are in the approved color palette.

Starbucks last made news with changes to the company’s in-store dress code back in the fall of 2014, when the chain allowed visible tattoos and nose studs for the first time.

But the new 2016 updates were expected, as Chairman and Chief Executive Officer Howard Schultz issued a broad letter earlier in May outlining ways Starbucks wanted to be a more desirable employer. That letter said it would share more details about the dress code changes at an employee event scheduled for the end of the month.

Other moves Starbucks made included a raise that will boost compensation by as much as 5% to 15% and expanded health care offerings.

“Our latest dress code changes are designed to work well with the green apron while expanding your options, providing more room for self-expression, and allowing you to choose from items that may already be part of your everyday wardrobe,” Schultz wrote earlier this month.