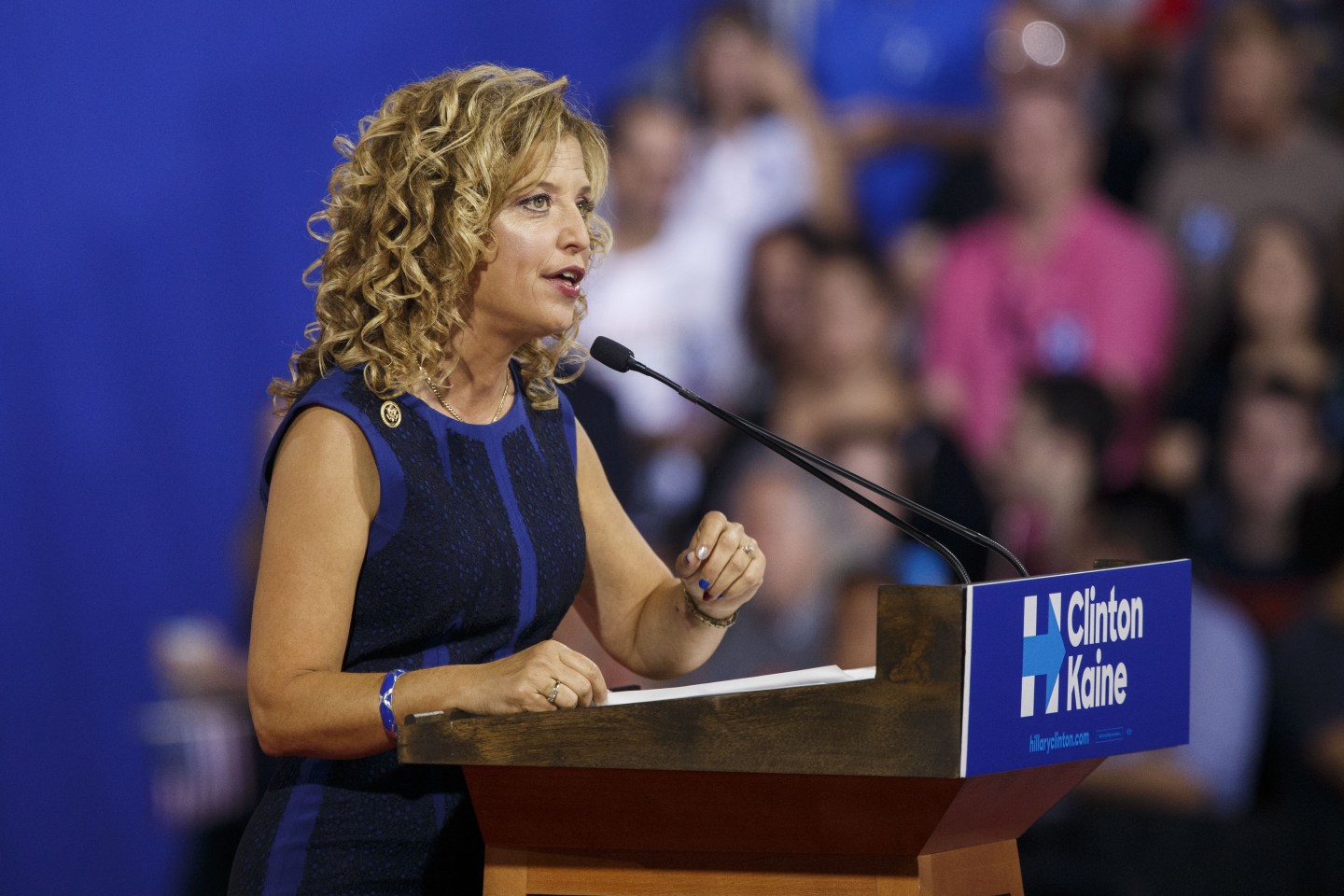 Debbie Wasserman Schultz, chairperson of the Democratic National Committee (DNC), speaks during a campaign event for Hillary Clinton, presumptive 2016 Democratic presidential nominee, not pictured, in Miami, Florida, U.S., on Saturday, July 23, 2016. Clinton named Virginia Senator Tim Kaine as her running mate for the Democratic presidential ticket, a widely-anticipated choice that may say more about how she wants to govern than how she plans to win in November. Photographer: Patrick T. Fallon/Bloomberg via Getty Images
Patrick T. Fallon — Bloomberg via Getty Images

The head of the Democratic Party resigned on Sunday amid a furor over embarrassing leaked emails, hoping to head off a growing rebellion by Bernie Sanders supporters on the eve of the convention to nominate Hillary Clinton for the White House.

Lingering bitterness from their heated primary campaign erupted after more than 19,000 Democratic National Committee emails, leaked on Friday, seemed to confirm Sanders’ frequent charge that the party played favorites in the race.

In a statement, DNC Chairwoman Debbie Wasserman Schultz said the best way for the party to accomplish its goal of putting Clinton in the White House was for her to step down. Sanders had demanded earlier in the day that Wasserman Schultz resign.

The furor was a blow to a party keen on projecting stability in contrast to the volatility of Republican candidate Donald Trump, who was formally nominated at a raucous convention last week, and overshadowed preparations in Philadelphia for Clinton’s coronation as the nominee to face Trump in the Nov. 8 U.S. presidential election.

Wasserman Schultz to Have a New Role in Clinton Campaign

The four-day Democratic convention will open on Monday. In some good news for Clinton, The New York Times reported that businessman and former New York City Mayor Michael Bloomberg will endorse her in a prime-time speech on Monday, saying she will be the best choice for moderate voters in 2016.

The cache of emails leaked on Friday by the WikiLeaks website revealed DNC officials explored ways to undermine Sanders’ insurgent presidential campaign, including raising questions about whether Sanders, who is Jewish, was really an atheist.

Sanders said Wasserman Schultz, a member of Congress from Florida, had made the right decision for the future of the Democratic Party. “The party leadership must also always remain impartial in the presidential nominating process, something which did not occur in the 2016 race,” he said.

The Clinton camp questioned whether Russians may have had a hand in the hack attack on the party’s emails and were interested in helping Trump, who has exchanged words of praise with Russian President Vladimir Putin.

“What’s disturbing to us is that experts are telling us that Russian state actors broke into the DNC, stole these emails and other experts are now saying that Russians are releasing these emails for the purpose of helping Donald Trump,” Clinton campaign chairman Robby Mook said on CNN’s “State of the Union.”

Clinton, 68, a former secretary of state, and Sanders, 74, an independent U.S. senator from Vermont who ran for president as a Democrat, waged a heated months-long battle for the nomination. Branding himself a democratic socialist, Sanders galvanized young and liberal voters with his calls to rein in Wall Street and eradicate income inequality.

But Sanders repeatedly voiced frustration with a DNC and party establishment that he felt was stacked against him, and the resentment from Sanders and his supporters threatened to disrupt the convention.

“I’m not shocked but I’m disappointed,” Sanders said of the emails earlier on Sunday on ABC’s This Week.

The emails showed DNC officials pondering various ways to undercut Sanders. Brad Marshall, the DNC’s chief financial officer, apologized on Facebook on Saturday for an email in which he discussed how some voters in upcoming nominating contests in Kentucky and West Virginia would reject an atheist.

“He had skated on saying he has a Jewish heritage,” Marshall wrote in a May 5 email to three top DNC officials. No names were mentioned, but Sanders was the only Jewish candidate.

“I think I read he is an atheist. This could make several points difference with my peeps. My Southern Baptist peeps would draw a big difference between a Jew and an atheist.”

The emails angered many Sanders supporters who were already dismayed by Clinton’s choice on Friday of low-key U.S. Senator Tim Kaine of Virginia as her vice presidential running mate. Kaine, who could appeal to independents and moderates, has never been aligned with party liberals.

Sanders, who has endorsed Clinton and will speak on her behalf to the convention on Monday, said he would have preferred she pick U.S. Senator Elizabeth Warren of Massachusetts, a favorite of the party’s liberal wing, as her No. 2.

“I have known Tim Kaine for a number of years… Tim is a very, very smart guy. He is a very nice guy,” Sanders said on NBC’s “Meet the Press.”

“He is more conservative than I am. Would I have preferred to see somebody like an Elizabeth Warren selected by Secretary Clinton? Yes, I would have,” he said.

Carrying pitchforks meant to portray Clinton as the devil, hundreds of Sanders supporters took to the streets of Philadelphia earlier on Sunday to say they felt betrayed by the DNC.

“It just validated everything we thought, everything we believed to be true, that this was completely rigged right from the beginning, and that you know it was really about what they were doing everything to set it up so she would win,” Sanders supporter Gwen Sperling said.

DNC Vice Chairwoman Donna Brazile will serve as interim chair through the election, the DNC said on Twitter.