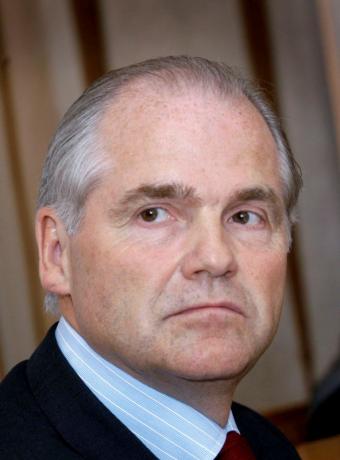 Swedish businessman Melker Schorling, major shareholder of the security companies Securitas and Assa Abloy, is seen in this file photo taken in Stockholm, Sweden May 26, 2005. To match Insight SWEDEN-TYCOON/ TT News Agency/Tomas Oneborg/via REUTERS ATTENTION EDITORS - THIS IMAGE WAS PROVIDED BY A THIRD PARTY. FOR EDITORIAL USE ONLY. SWEDEN OUT. NO COMMERCIAL OR EDITORIAL SALES IN SWEDEN.
TT NEWS AGENCY

Business tycoon Melker Schorling, one of Sweden’s most prominent investors, says he is well-positioned to expand his 60 billion crown ($7 billion) investment empire even as he prepares to hand over affairs to his daughters.

MSAB, the holding company he set up in 1999 which spans a diverse set of companies from measurement technology to locks and guards, has consistently outperformed larger rivals.

Investors attribute Schorling’s success to a knack for picking small specialists which go on to become global market leaders.

In a decade, MSAB has had returns of over 500%, outperforming rivals such as Wallenberg-backed Investor AB and Industrivarden and leading Swedish media to dub Schorling “King Midas” of the Stockholm bourse.

But while Schorling’s path to success has had few bumps, some analysts are beginning to question the future of the group which has not made a single new investment in a decade.

Schorling turns 70 next year and although his daughters have become more involved they have not yet stepped into high-profile executive roles, and he recently lost one of his closest team members, MSAB CEO Ulrik Svensson, who leaves at year-end to join Lufthansa as CFO.

Svensson’s departure raises some questions about the group’s direction and stability, analysts say.

Schorling, who shies away from media appearances, is not planning major changes.

“We are very long-term oriented and it is highly likely that our holdings will be the same for many years to come,” he told Reuters in an email.

But opportunity may be on the horizon for MSAB which has six listed companies like Assa Abloy, the world’s biggest maker of locks, Securitas, the world’s second-biggest provider of guards, and Hexagon, market leader in precision measurement technology.

“For the time being we have actually divested a bit from our holdings to make sure that we have enough dry powder for future investments,” he said. “Valuation multiples are high at the moment and we believe there could be interesting investment opportunities in the future.”

While Brexit worries have hit shares—the STOXX Europe Industrial Goods & Services Index is down 8.5% on the year—the S&P 500 remains at record highs.

This Scandinavian Country is Banning M&Ms

Nordea analyst Elias Porse reckons Svensson’s departure could trigger a “generational renewal” of MSAB, with one of the daughters stepping in as CEO, though a CFO from a portfolio company could be appointed instead.

Both Sofia and Marta are board members for MSAB and its investment companies.

“Ultimately they will take over but we do not have a specific timing for that,” Schorling said.

Schorling and his CEO proteges are bellwethers for investors who will be watching any investment moves closely.

Those near Schorling say he has an eye for talent. He insists his leaders take large stakes, so they reap the benefits or bleed together.

Rollen’s own wealth has multiplied since taking the job in 2000, when he took an unsecured loan equal to two years’ salary to buy options—a large bet by Swedish standards.

“Had I been older, wiser and been able to do the math better at the time, I would probably never have done it,” he said with a laugh, reflecting on his financial gamble.

Just his Hexagon B shares are now worth almost $50 million.

Bernie Sanders Is Taking the Wrong Lessons From Sweden

Schorling believes he may have “a good gut feeling for people”. He looks for entrepreneurship, long-term thinking and a “very healthy lack of bureaucracy” in all his CEOs.

Unlike the current generation of Wallenbergs who inherited vast investment empires, farmer’s son Schorling built his fortune on a first bet on Securitas for which he took a massive bank loan for.

Last year, he was the sixth wealthiest Swede, according to magazine Veckans Affarer. His group’s net asset value falls just short of Industrivarden’s. It and Investor are the traditional investment behemoths of Swedish business.

Still, MSAB struggled through the 2008 crisis when debts at Hexagon, its crown jewel at over half its portfolio, sent shares in both tumbling. Hexagon’s net debt-to-equity ratio has since more than halved.

Instead of transforming cash handling business Loomis early on as countries like Sweden moved towards being cashless, MSAB whittled down its holding in March this year.

Volvo’s Solution for the Package Theft Epidemic: Your Car’s Trunk

Another misstep came when Securitas spun off its hi-tech Niscayah unit in 2006 and wound up getting outbid by Stanley Black & Decker (SWK) when it tried to buy it back five years later.

MSAB is closely tied to the highs and lows of the industrial cycle. Asked about this, Schorling said there were no plans to change the asset mix to even things out.

“We do not think in diversification terms,” he said. “Some of the companies are affected by the industrial cycle but they have been well tested in the financial crisis.”

MSAB will likely keep growing through M&A by its holdings.

“They do have the benefit of synergies which means it is much easier for them to make a good return on an acquisition,” Schorling said.

A senior banker who has worked with some of Schorling’s companies described his style as highly effective.

“It would have to be a really big investment or M&A deal for it to be raised up centrally to top management,” he said.

Schorling may be in the driver’s seat for some time to come.

Carl Bek-Nielsen, an MSAB board member and chair of United International Enterprises—its third biggest shareholder—said Schorling was not stepping down anytime soon.

“I bet you if he were a car and you opened up his bonnet, there would be a fantastic V8 engine well lubricated and ready to go another 400,000 kilometers,” he told Reuters.