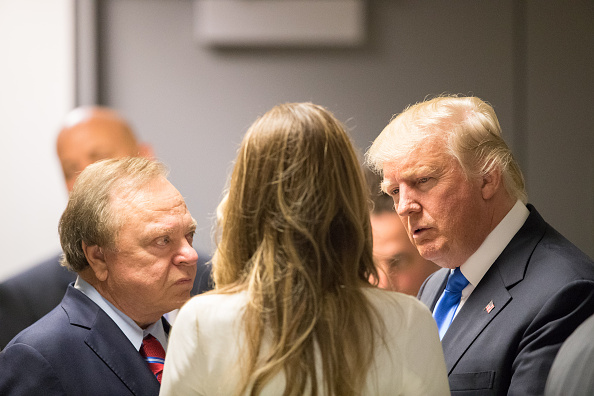 Nomination finally in hand, the Donald Trump campaign charged ahead Wednesday with a convention-week mission to redefine its brash celebrity leader as a serious-minded family man. It’s a project proving harder than uniting skeptical Republicans behind their distaste for another brand they know well: The Clintons.

Real estate mogul and reality television star Trump secured the GOP mantle Tuesday night in a roll call vote that officially brought the outsider into the heart of American politics. The tallying of the votes was followed by a display of Trump’s two-track persuasion effort: Testimonials vouching for his character — delivered by his family — and searing indictments of Clinton’s character — delivered by the rest of the party.

Trump adviser Paul Manafort acknowledged both elements Wednesday, noting the campaign is “trying to show other parts of his personality,”

“We feel the America people don’t know all of Donald Trump,” he said on ABC’s “Good Morning America.”

Manafort also acknowledged the fierce opposition to Hillary Clinton that arose from the convention floor Tuesday, as delegates chanted “Lock her up!” and cheered speakers who labeled her a liar. Some Republican leaders say Clinton should be prosecuted for mishandling classified material during her time as secretary of state, he said.

The rebranding effort continues on Day 3 of the convention. Eric Trump, the candidate’s 32-year-old son and a close adviser, is to deliver a speech aimed at answering what motivates his father to leave a life of luxury resorts and golf for the gritty work of politics: “Why is my father doing it? Why does he care this much? Why now?” he said.

Pence is heartily on board the Trump bandwagon; Cruz isn’t yet, nor are many of his supporters in Cleveland. The senator’s scheduled prime-time address will be keenly watched as a measure of whether a desire to beat Clinton can heal even the deepest wounds.

There are signs the answer is: not quite. Cruz isn’t expected to offer a full-throated endorsement of Trump, but will at least “suggest” that he is backing Trump’s candidacy for president, Manafort said.

Trump’s polarizing, unpredictable bid for the nomination has alienated Republicans both on the right and in the center, and the divide has spilled over into the convention, though without overwhelming it. Tuesday’s roll call unfolded largely according to plan after a day dominated by unwelcome attention over passages from an eight-year-old Michelle Obama speech that made their way into Melania Trump’s address to the convention, almost word for word, the night before.

Tuesday night, speaker after speaker stepped forward to denounce Clinton, none to greater effect with the crowd than New Jersey Gov. Chris Christie.

The governor, a dropout in the GOP presidential race who ended up on the short list for Trump’s running mate, energized the hall as he ticked through numerous accusations of wrongdoing against Clinton and implored delegates to shout “guilty.”

Two of Trump’s children testified to his character. “For my father, impossible is just the starting point,” said Donald Trump Jr., eldest of the nominee’s five children. Tiffany Trump, 22, said her dad is a “natural-born encourager” and she recalled the notes he wrote on her report cards.

Questions about plagiarism surfaced for a second day in a row, this time in the eldest son’s speech. But F.H. Buckley, the writer behind the original work in question this time — an article in The American Conservative — said he was a principal speechwriter for the younger Trump and said the campaign did nothing wrong.

On the convention floor, Rep. Mark Meadows of North Carolina was feeling the fighting spirit, telling reporters, “It’s all starting to gel.” Not so for Colorado delegate Kendal Unruh, a leader of the outmaneuvered anti-Trump contingent, who said it’s time to “cancel the convention, stop the sham,” and who warned Trump might run into a “show of displeasure” in his acceptance speech ending the convention Thursday night. Colorado cast most of its votes for Cruz.

The convention offers Trump one of his best chances to convince voters he’s better suited for the presidency than Clinton. But the rocky start raised questions about his oversight of his campaign, which gives voters a window into how a candidate might handle the pressures of the presidency.

As large and challenging as political conventions are, they pale in comparison with the scope of a president’s responsibilities, and sloppiness in Cleveland could hint at what a Trump presidency could look like.

Whether that matters to voters, though, is another question. The billionaire has survived, even prospered through, a series of contentious episodes that might have consumed a conventional politician — or a conventional convention.