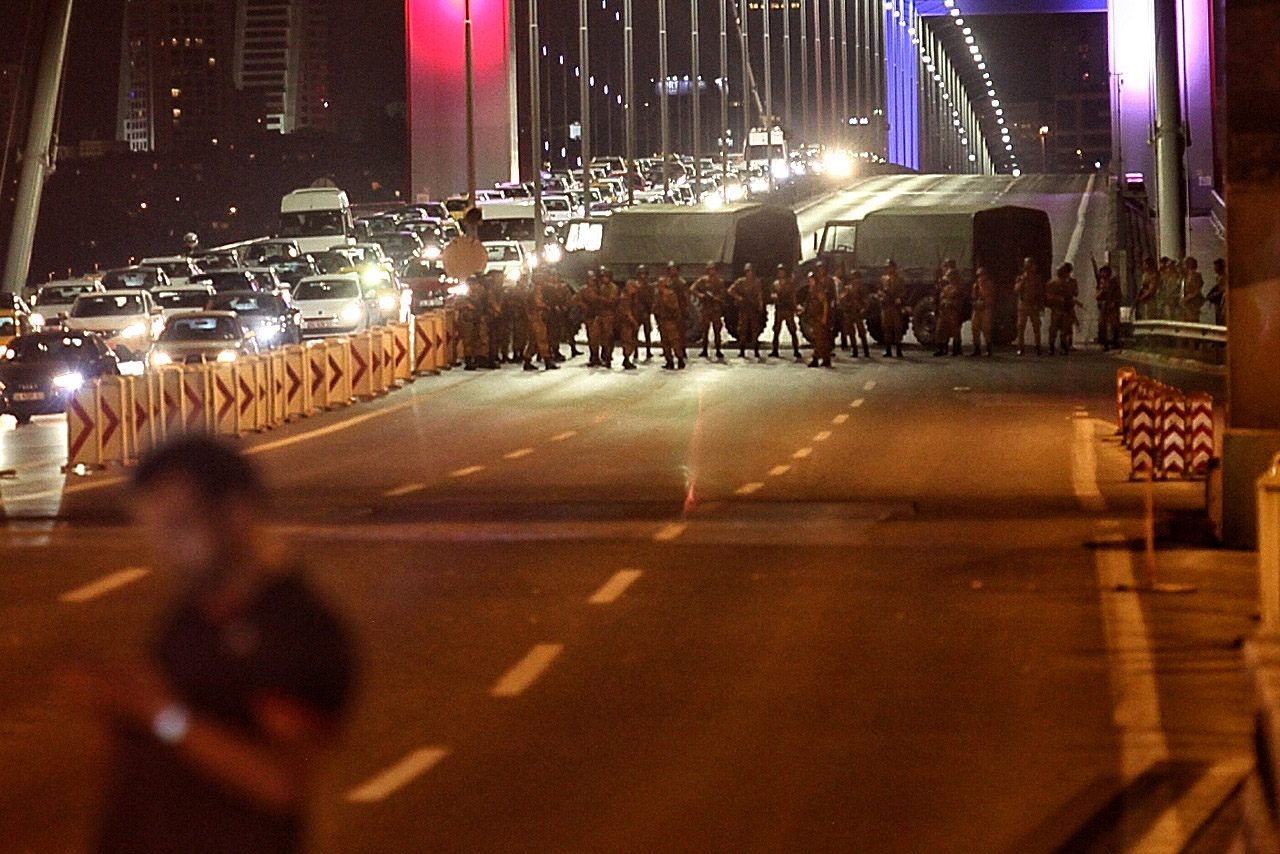 ISTANBUL, TURKEY - JULY 15: Turkish soldiers block Istanbul's Bosphorus Brigde on July 15, 2016 in Istanbul, Turkey. Istanbul's bridges across the Bosphorus, the strait separating the European and Asian sides of the city, have been closed to traffic. Reports have suggested that a group within Turkey's military have attempted to overthrow the government. Security forces have been called in as Turkey's Prime Minister Binali Yildirim denounced an "illegal action" by a military "group", with bridges closed in Istanbul and aircraft flying low over the capital of Ankara. (Photo by Gokhan Tan/Getty Images)
Gokhan Tan Getty Images

(TIME) – Turkish President Recep Tayyip Erdogan publicly reassured citizens early Saturday in Istanbul after a chaotic night in which factions of Turkey’s military said they had taken control of the country. Erdogan had apparently been on a plane that was held in the air while the attempted coup was underway, before landing in Istanbul. He had called for citizens to take to the streets in support of his democratically elected government, before emerging at Istanbul’s Ataturk airport.

Speaking to a large crowd outside the airport, Erdogan said the elected government was still in control of the country. “We are not going to compromise,” he said.

In televised remarks earlier on Saturday he referred to the attempted coup as an “uprising, a betrayal movement,” that originated from a small group within the military.

Within a few hours of the coup attempt, the country’s national intelligence spokesperson said it had been “repelled,” as Turkish residents heeded Erdogan’s call and filled public spaces as a statement of support.

According an official in Erdogan’s office 60 people, most of them civilians, were killed during the coup attempt, reports the Associated Press. In Istanbul, at least 150 people were admitted to the Haydarpasa Numune Hospital with injuries, but there was no word on fatalities there.

As the government said they were working to crush the coup, an official told AP that 336 people had been arrested across the country. Most of those in custody are reportedly police officers. Earlier on Saturday, Prime Minister Binali Yildirim said “things are getting better every minute,” adding that he had ordered planes flown by coup plotters to be shot down.

But the chaos continued into the morning, with reports that a bomb had hit the Turkish parliament in the capital of Ankara, injuring people there. There were additional reports of explosions and gunfire in Istanbul’s main Taksim Square and the state-run news agency Anadolu reported that a military helicopter used by coup plotters had been shot down on the outskirts of Ankara.

The coup attempt began Friday evening when tanks rolled on the streets in Ankara and Istanbul, and the latter city’s airport was reportedly taken over by the military. “Turkish Armed Forces have completely taken over the administration of the country to reinstate constitutional order, human rights and freedoms, the rule of law and the general security that was damaged,” said a military statement sent to journalists. “All international agreements are still valid. We hope that all of our good relationships with all countries will continue.”

Erdogan, speaking via a FaceTime conversation broadcast live on television, said he would join citizens in the street. His office said he is currently in a secure location, according to a statement from his office reported by the Associated Press.

“It is carried out without my knowledge and it is completely illegal,” Erdogan said. “I am inviting everyone to go outside and resist against this illegal structure.”

Earlier in the night Prime Minister Yildirim had said that a group within the military had attempted to take power. “Some people illegally undertook an illegal action outside of the chain of command,” he said in comments broadcast by private television channel NTV, according to Reuters. “The government elected by the people remains in charge. This government will only go when the people say so.”

“This uprising is a terror action,” Yildirim later added on NTV, saying it was no different “than the terrorist attacks going on in [the] southeast of Turkey.”

“Every attack attempt will be answered both from the air and the land,” he later said on NTV.

Obama called on people in Turkey to “support the democratically-elected government… show restraint, and avoid any violence or bloodshed.”

But there were reports of just that, with the state-run Anadolu agencyreporting a bomb had hit a public relations building at the Turkish parliament, injuring some police officers. Parliament Speaker Ismail Kahraman said that there were no fatalities and that all legislators were safe.

There were also reports that 17 police officers had been killed in a military helicopter attack on a police special forces HQ just outside Ankara.

Inside Ankara, a loud explosion was reported where a heavy security presence had gathered. Security forces blocked two bridges over the Bosphorus strait that runs through Istanbul, and at least one major road in the city, according to Turkish television footage. On Istanbul’s Istiklal street, a major pedestrian thoroughfare, this reporter saw few people on what would have been a busy time on Friday night.

Turkey’s military has forced changes of government four times since 1960, and another military coup has long been considered a possibility under the current government led by Erdogan, who has been in power since 2003. But Erdogan’s government had taken steps that were believed to politically defang the military. In 2010, hundreds of current and former military officials were arrested after being accused of a plot to overthrow Erdogan.

Over the last year Erdogan’s government approved a crackdown on Kurdish militants in the southeast of the country, who had long fought for more autonomy from the central government. The breakdown in negotiations with Kurdish militants resulted in a series of deadly bombings throughout the country. Turkey has also been engaged in an increasingly bloody battle with ISIS, which repeatedly struck civilian targets in the country—most recently a suicide attack on Istanbul’s Ataturk airport on June 28 that killed over 40 people. All flights from the airport have been blocked, and the military has reportedly taken it over.

Erdogan, who has been criticized for his increasingly authoritarian policies, had reportedly been on vacation in the seaside Turkish city of Bodrum. It is not clear what his whereabouts are, though Turkey’s state news agency reported that the military’s chief of staff had been taken captive. The military has long viewed itself as the guardian of Turkey’s secular government.

It remains unclear how much of the military is participating in the coup attempt, according to Burak Kadercan, an expert on Turkish politics at the U.S. Naval War college in Rhode Island. “This is a mid-level coup attempt so far,” he says. “It’s not a top-down coup.”

This article originally appeared at Time.com. This article was updated from the original with additional information.