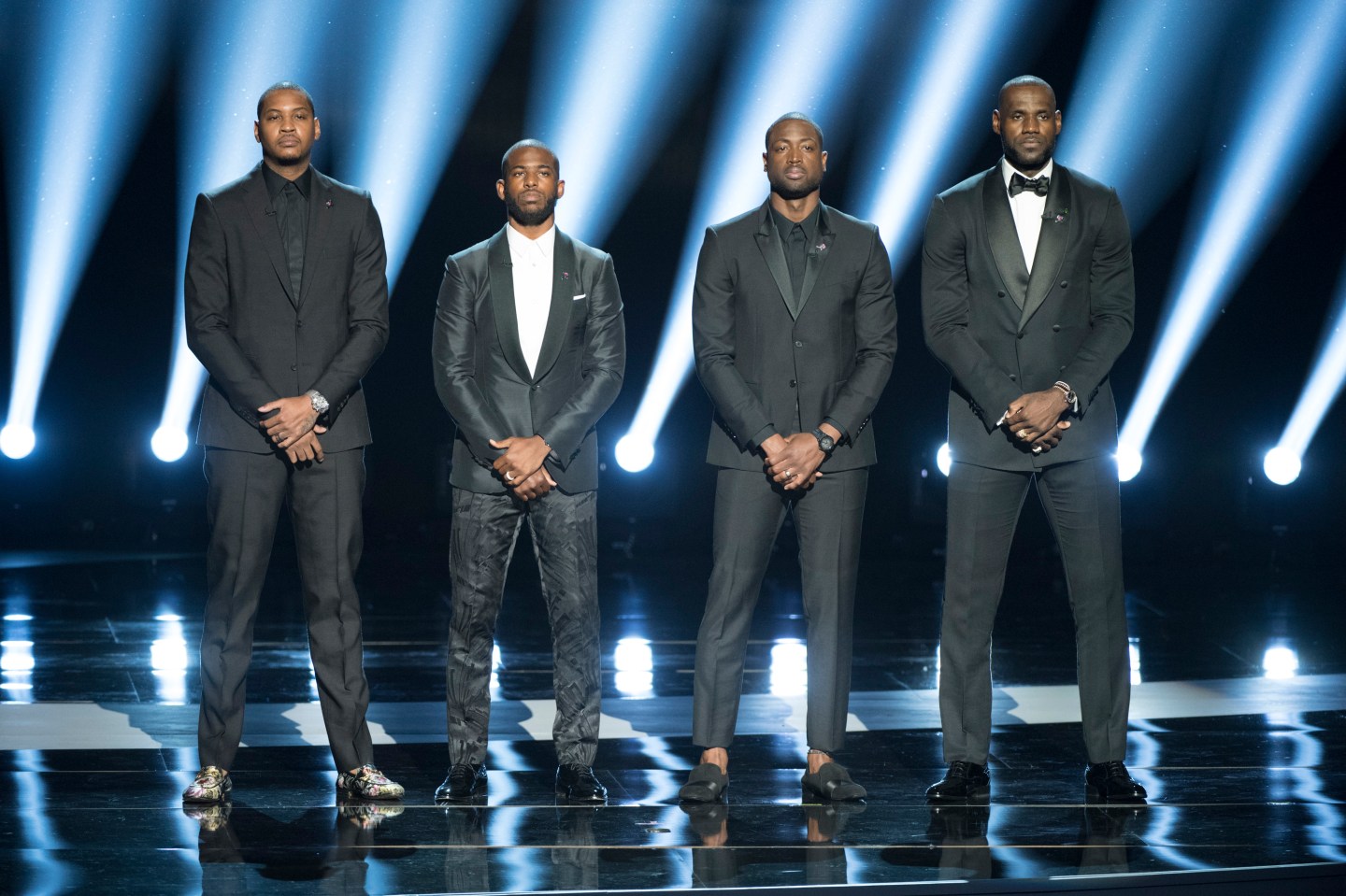 On a night in which LeBron James took home several awards, including for best male athlete, the NBA star also joined three of his friends and fellow stars on stage at ESPN’s ESPY Awards to plead for an end to violence in the wake of several tragic shootings across the U.S.

James took the stage during the opening moments of the ESPYs in Los Angeles on Wednesday night along with Carmelo Anthony, Chris Paul, and Dwyane Wade to address the recent violence that has transfixed the American public, including the mass shooting in Orlando as well as last week’s shootings of two black men by police in Louisiana and Minnesota, and the five police officers slain in Dallas. The basketball stars brought a somber message for an audience filled with their fellow athletes, asking them to promote nonviolence and social change.

“It’s time to look in the mirror and ask ourselves what are we doing to make change, and renounce all violence,” James said from the ESPYs stage. “We all have to do better.”

For the New York Knicks’ Anthony, the moment came as the star has been especially active on social media in the last week, with an Instagram post calling for athletes “to step up and take charge” to bring about change. On Wednesday night, Anthony told the ESPYs audience that “the system is broken . . . [and] the urgency for change is definitely at an all-time high.”

The stars also referenced several prominent social activist-athletes from the past, such as Jackie Robinson and Muhammad Ali—as well as some who were in attendance last night, like Tommie Smith, Kareem Abdul-Jabbar, Jim Brown, and Billie Jean King—while noting the role that high-profile athletes can play in addressing social issues.

“Tonight we’re honoring Muhammad Ali, the GOAT (greatest of all time),” James said. “But to do his legacy any justice, let’s use this moment as a call to action to all professional athletes to educate ourselves, explore these issues, speak up, use our influence and renounce all violence and, most importantly, go back to our communities, invest our time, our resources, help rebuild them, help strengthen them, help change them. We all have to do better.”

Following their opening remarks, Anthony told Vanity Fair that his fellow NBA stars reached out to him after seeing his Instagram post and the players decided over a group-texting session to come together Wednesday night to deliver their message.