Here’s What Business Can Expect From U.K. Prime Minister Theresa May 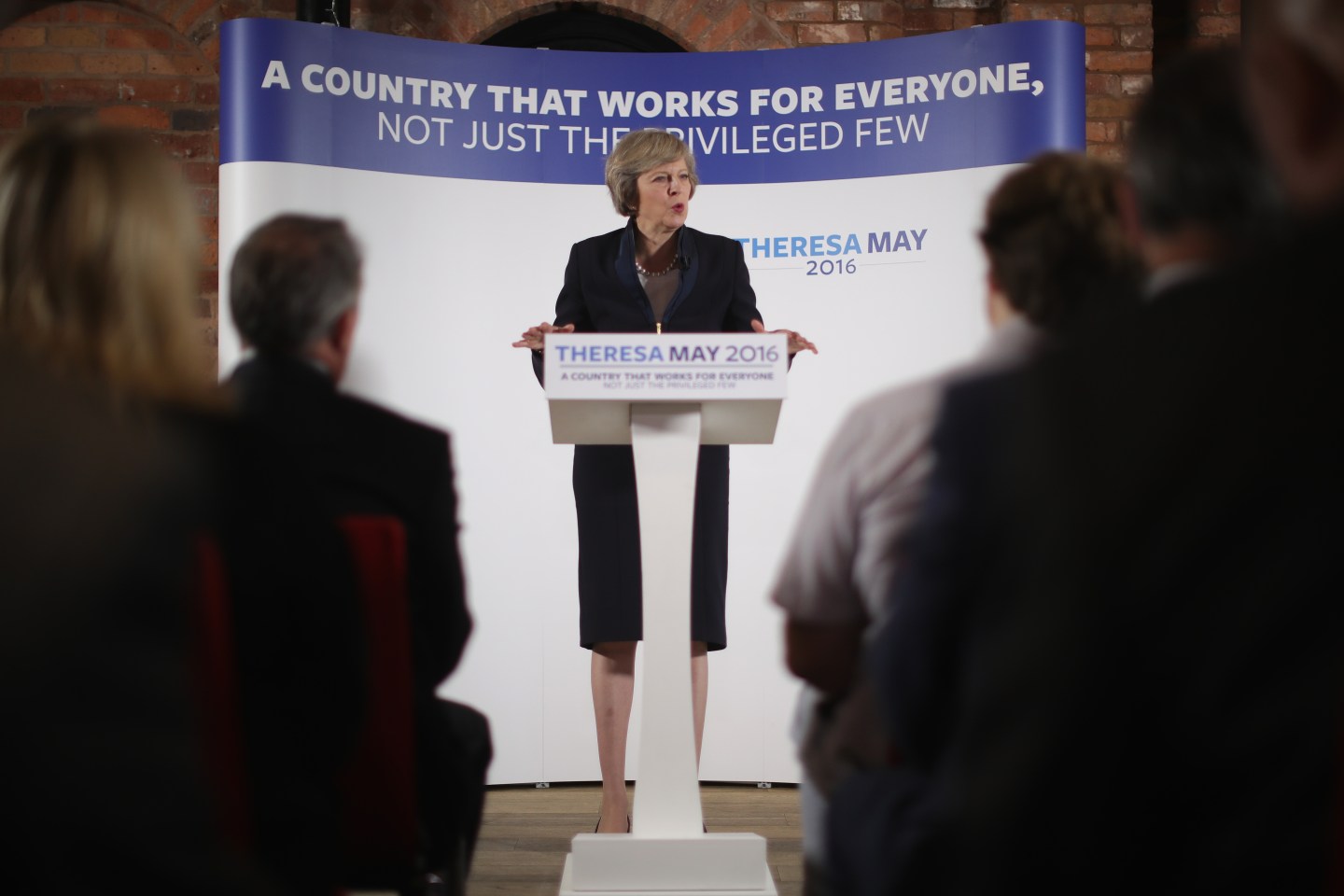 BIRMINGHAM, ENGLAND - JULY 11: British Home Secretary Theresa May launches her Conservative party leadership campaign at the IET events venue on July 11, 2016 in Birmingham, England. Theresa May MP and Andrea Leadsom MP are the last two remaining contenders in the leadership race to be Prime Minister of the United Kingdom after the resignation of David Cameron. (Photo by Christopher Furlong/Getty Images)
Christopher Furlong Getty Images

Theresa May is set to become the U.K.’s second woman prime minister, following in the footsteps of Margaret Thatcher. But how much do the two have in common beyond their party allegiance and gender?

Not much, to judge by the keynote speech May delivered Monday in Birmingham, England’s second city and the heart of its industrial Midlands. Much of it could have been written by Tony Blair’s spin doctors of the early 1990s, stressing the need for a caring, healing, unifying government which sees its first duty as correcting the excesses of capitalism. Here’s some highlights of what she promised.

1. ‘Brexit Means Brexit’ (Whatever That Means)

Having supported David Cameron’s ‘Remain’ campaign in the referendum, May has some work to do to convince her party and the country that she really believes in leaving the European Union. But she has been consistent since June 23rd about the need to deliver the referendum’s mandate, and she did so again today: “Brexit means Brexit and we’re going to make a success of it. There will be no attempts to rejoin…by the back door, no second referendum” to overturn the first one. The thing is, nobody knows yet what the terms of Brexit will be. The key issue will be whether May prioritizes access to the EU’s Single Market, minimizing the impact on business, or control over immigration from the EU, which would mean forfeiting full Single Market access. But her speech gave nothing away on that point.

2. War on the “Fat Cats” of the Boardroom

Recognizing the role played by growing inequality in the referendum vote, May said she’ll tackle “the irrational, unhealthy and growing gap” between management and staff. She outlined “a vision of a country that works for everyone—not just the privileged few.” She then outlined a two-pronged attack on the poor corporate governance that has given being “the party of business” a bad name in recent years.

First, May said that workers should be represented on company boards, in a nod to a German model that has tended to deliver better industrial relations over the years. But in contrast to Germany, she said she also wanted consumers represented. She took a swing at the way that companies’ non-executive directors too often come from the same “narrow social and professional circles” as the managers they’re supposed to oversee, saying that “the scrutiny they provide is often just not good enough.”

Second, she said that she wanted shareholders to have more power over executive pay by making votes on annual pay awards binding, rather than advisory as they are now. Such a move would have stopped—for instance—BP Plc (BPAQF) chief executive Bob Dudley from getting the $20 million he was awarded for last year since nearly 60% of shareholders voted against it.

“We’re the Conservative Party, and yes, we’re the party of enterprise—but that does not mean we should be prepared to accept that ‘anything goes’,” May said.

May spoke up for the right to intervene to stop undesirable takeovers, saying (without even the hint of a French accent) that “transient shareholders…are not the only people with an interest when firms are sold or closed.” She singled out Pfizer Inc.’s abortive bid for AstraZeneca Plc two years ago as an example of what her government could see as “undesirable,” pointing to Pfizer’s “record of asset-stripping” and its “self-professed” desire to cut its tax burden.

4. A Sharper Focus on Inequality

Conservatives haven’t traditionally set much store by inequality. When the party talks about it, it is usually only in terms of providing equality of opportunity, rather than outcomes. May went out of her way to anatomize that problem, but the sheer length of her agenda sounds more like a wish list than a series of deliverable remedies.

“Right now, if you’re born poor, you will die on average nine years earlier than others. If you’re black, you’re treated more harshly by the criminal justice system than if you’re white. If you’re a white, working-class boy, you’re less likely than anybody else to go to university. If you’re at a state school, you’re less likely to reach the top professions than if you’re educated privately. If you’re a woman, you still earn less than a man. If you suffer from mental health problems, there’s too often not enough help to hand. If you’re young, you’ll find it harder than ever before to own your own home.”

Interestingly, the one moment when her audience interrupted her with “hear, hear,” was when she complained of the “gaping chasm between a wealthy London and the rest of the country.” London was one of few places in England to vote Remain by a large margin. The Midlands, which has done well from the car industry’s revival over the recent decade, voted by and large to leave.

When a Conservative leader promises to put their party “completely, absolutely, unequivocally…at the service of ordinary working people,” you can be forgiven for thinking there’s an election in the air. May told Tory MPs two weeks ago that she wanted to avoid a snap election, and that probably won her some votes among colleagues reluctant to risk losing their seats only one year into a five-year term. But there are obvious problems with her mandate: she didn’t win the general election, she campaigned on the losing side of the referendum, and she doesn’t even have the blessing of the party membership thanks to the astonishing series of political suicides by her rivals. It also makes good tactical sense, given how much better the Tories have coped than Labour with their referendum-induced internal dysfunction. It will require some legal acrobatics: under existing law, parliament can only dissolve itself by a two-thirds majority vote in favor, or as the result of a no-confidence vote. But after the last couple of weeks, the sight of a Conservative majority in the House of Commons expressing no confidence in its own government won’t even register in the Top 5 Political Shocks of the Month. An election, of course, won’t end the uncertainties that will plague the Brexit process for the next two years. But it would at least remove one source of uncertainty for five.