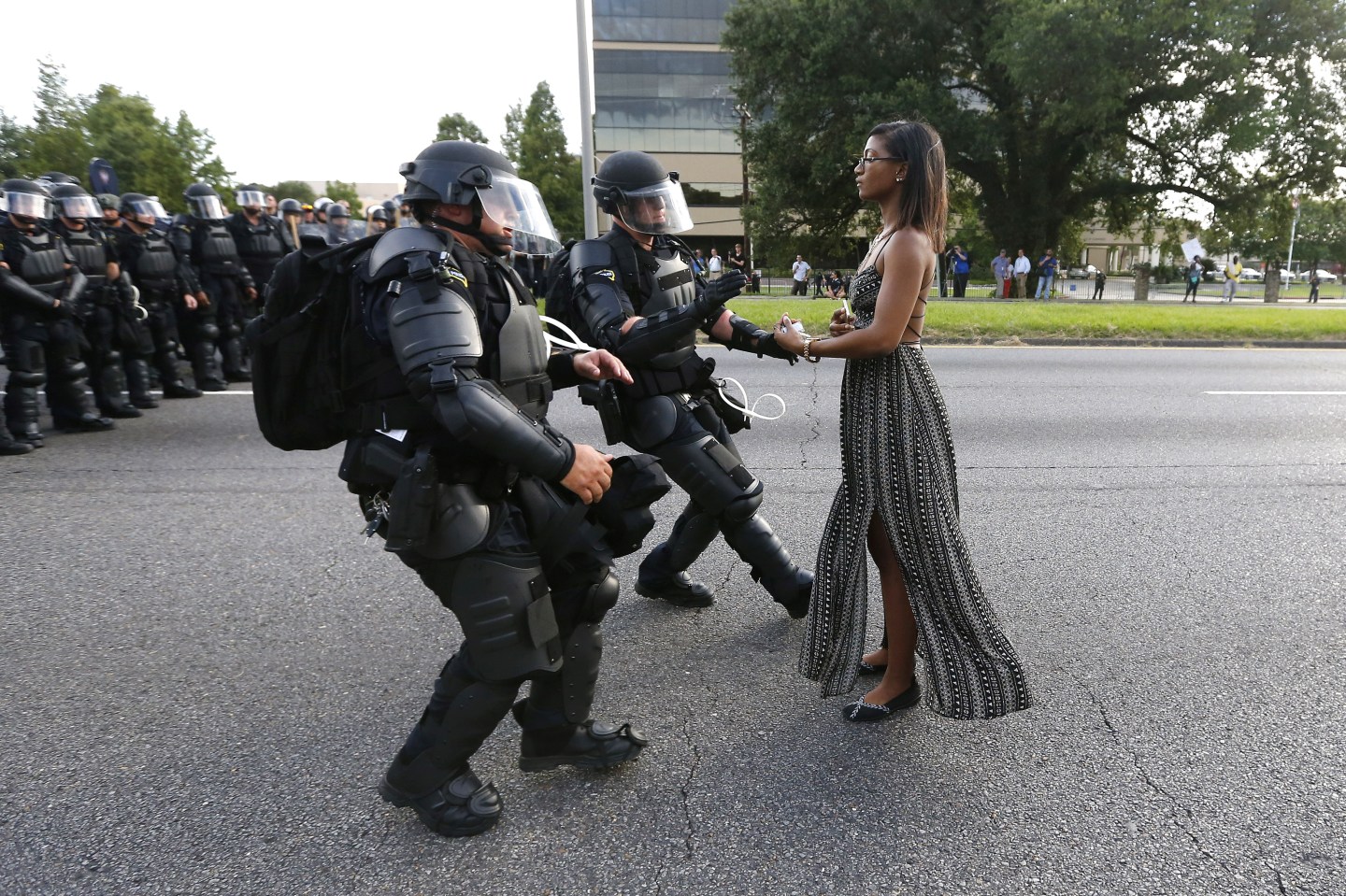 A demonstrator protesting the shooting death of Alton Sterling is detained by law enforcement near the headquarters of the Baton Rouge Police Department in Baton Rouge, Louisiana, U.S. July 9, 2016. REUTERS/Jonathan Bachman TPX IMAGES OF THE DAY - RTSH3XR
Jonathan Bachman — Reuters

Over the past 48 hours in Baton Rouge, La., where the fatal shooting of Alton Sterling by police officers last week has reignited a national conversation on race and policing, over 120 protesters have been arrested—including prominent Black Lives Matter activist DeRay McKesson.

But intense attention, however, has been focused on the image of the arrest of a lone woman in a flowing dress that has since gone viral. The woman stands, arms crossed, in front of a phalanx of officers, silent—even serene—but seemingly refusing to budge.

Although the woman’s identity is not yet confirmed, her actions were described in detail by the photographer who captured the image.

“A group of demonstrators had formed a blockade—blocked Airline Highway, which runs in front of Baton Rouge Police headquarters,” Jonathan Bachman, a New Orleans–based photographer who was on assignment for Reuters, told the Atlantic. Bachman said officers belonging to several divisions of Louisiana law enforcement, many clad in riot gear, descended on the highway to clear the protesters from its path.

“I saw this woman, and she was standing in the first lane in that road,” he said. “It happened quickly, but I could tell that she wasn’t going to move, and it seemed like she was making her stand. To me it seemed like: You’re going to have to come and get me.”

For more on the recent events, watch this video:

Bachman further stressed that in contrast to the violence and confrontation that has marked other protests across the country (some of which also broke out in Baton Rouge later), this interaction was completely peaceful.

“It wasn’t very violent. She didn’t say anything,” he added. “She didn’t resist, and the police didn’t drag her off.”

The image was shared widely on social media and by publications worldwide, with one commenter on the page of New York Daily News reporter Shaun King calling it a “legendary” picture that will someday be in “history and art books,” according to the BBC.

In another interview with BuzzFeed, Bachman, the photographer, said he was “humbled” by the response to his image.

“That was the first image I transferred [to Reuters] because I knew it was going to be an important photo,” he said. “You can take images of plenty of people getting arrested, but I think this one speaks more to the movement and what the demonstrators are trying to accomplish here in Baton Rouge.”