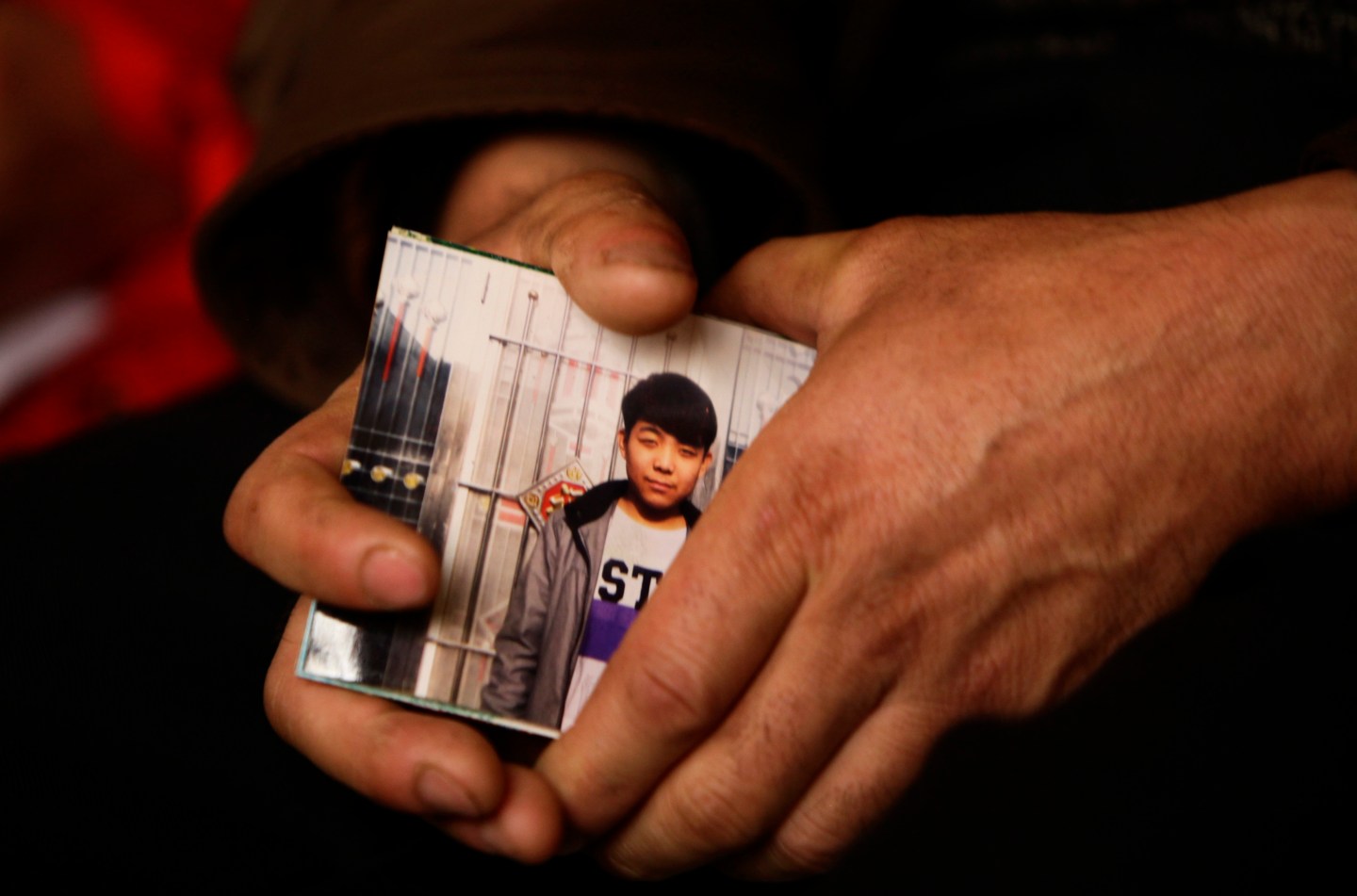 Shi Zengqiang, father of the 15-year-old Pegatron worker who died of pneumonia, holds his son's picture at a news conference in Beijing December 16, 2013. The death of the 15-year-old worker was not caused by working conditions at a Pegatron Corp factory, according to medical exports sent to the factory by Apple Inc. The boy died of pneumonia, the medical delegation said, after he apparently used someone else's ID to get a job at the Shanghai factory, which makes products for Apple. REUTERS/Jason Lee (CHINA - Tags: BUSINESS POLITICS EMPLOYMENT) - RTX16KOV
Photograph by Jason Lee — Reuters

As China’s medical bills rise steeply, outpacing government insurance provision, patients and their families are increasingly turning to loans to pay for healthcare, adding to the country’s growing burden of consumer debt.

While public health insurance reaches nearly all of China’s 1.4 billion people, its coverage is basic, leaving patients liable for about half of total healthcare spending, with the proportion rising further for serious or chronic diseases such as cancer and diabetes.

That is likely to get significantly worse as the personal healthcare bill soars almost fourfold to 12.7 trillion yuan ($1.9 trillion) by 2025, according to Boston Consulting Group estimates.

For many, like Li Xinjin, a construction materials trader whose son was diagnosed with leukemia in 2009, that means taking on crippling debt.

Li, from Cangzhou in Hebei province, scoured local papers and websites for small lenders to finance his son’s costly treatment at a specialist hospital in Beijing, running up debts of more than 1.7 million yuan, about 10 times his typical annual income.

“At that time, borrowing money and having to make repayments, I was very stressed. Every day I worried about this,” said Li, 47, adding that he and his wife had at times slept rough on the streets near the hospital.

The debts will weigh him down for a few more years yet.

For more on medical costs, watch:

Medical loans are just part of China’s debt mountain—consumer borrowing has tripled since 2010 to nearly 21 trillion yuan, and in eight years household debt relative to the economy has doubled to nearly 40%—but they are growing.

That is luring big companies like Ping An Insurance Group , as well as small loan firms and P2P platforms, as China’s traditional savings culture proves inadequate to the challenge of such heavy costs.

The stress is particularly apparent in lower-tier cities and rural areas where insurance has failed to keep pace with rising costs, said Andrew Chen, Shanghai-based healthcare head for consultancy Parthenon-EY.

“It’s a storm waiting to happen where patients from rural areas will have huge financial burdens they didn’t have to face before,” he said, adding people would often take second mortgages on their homes or turn to community finance schemes.

China’s Middle Class Is About to Demand Big Changes

China’s government has moved to ramp up rural health insurance, boost coverage for major illnesses and put pressure on drug companies to slash prices, but it is an uphill battle.

Official data show up to 44% of families pushed into poverty were impoverished by illness.

The Ministry of Health, which did not immediately respond to requests for comment, is currently investigating the impact of these costs on the country’s labor force.

“Typically, what happens in China is the whole family contributes when someone gets a severe disease like cancer,” Severin Schwan, chief executive of Roche Holding AG, the world’s biggest maker of cancer drugs, told Reuters.

“When it comes to innovative medicines, the financial burden is just too much. Families can go broke.”

Roche itself has schemes in China to make cancer drugs more affordable, including an insurance scheme developed with Swiss Re.

There are no reliable figures for total healthcare lending, as lenders do not usually advance the money for healthcare-specific purposes.

“If you want to use it for medical bills, cosmetic surgery or plastic surgery that’s all fine,” says Ping An Puhui, which advertises that its loans can “alleviate the pain of illness” and “bring new hope to sick families.”

But there is plenty of anecdotal evidence from online lenders that it is a growing segment.

“Our loan numbers have risen steadily, and no small number of people have used these for medical purposes,” said Li Jin, a customer service worker at peer-to-peer (P2P) lender ppdai.com.

“Healthcare costs are high, and lots of people don’t have good state cover, so they need a loan.”

Some desperate patients are pawning their personal belongings.

“They use things of various value from jewelry to purses and even cars,” said Chen Yi, an office worker at online lender minbaodai.cn.

“Previously the majority of people were looking for extra cash flow for their business, but last year and this we’ve seen a rise in healthcare loans.”