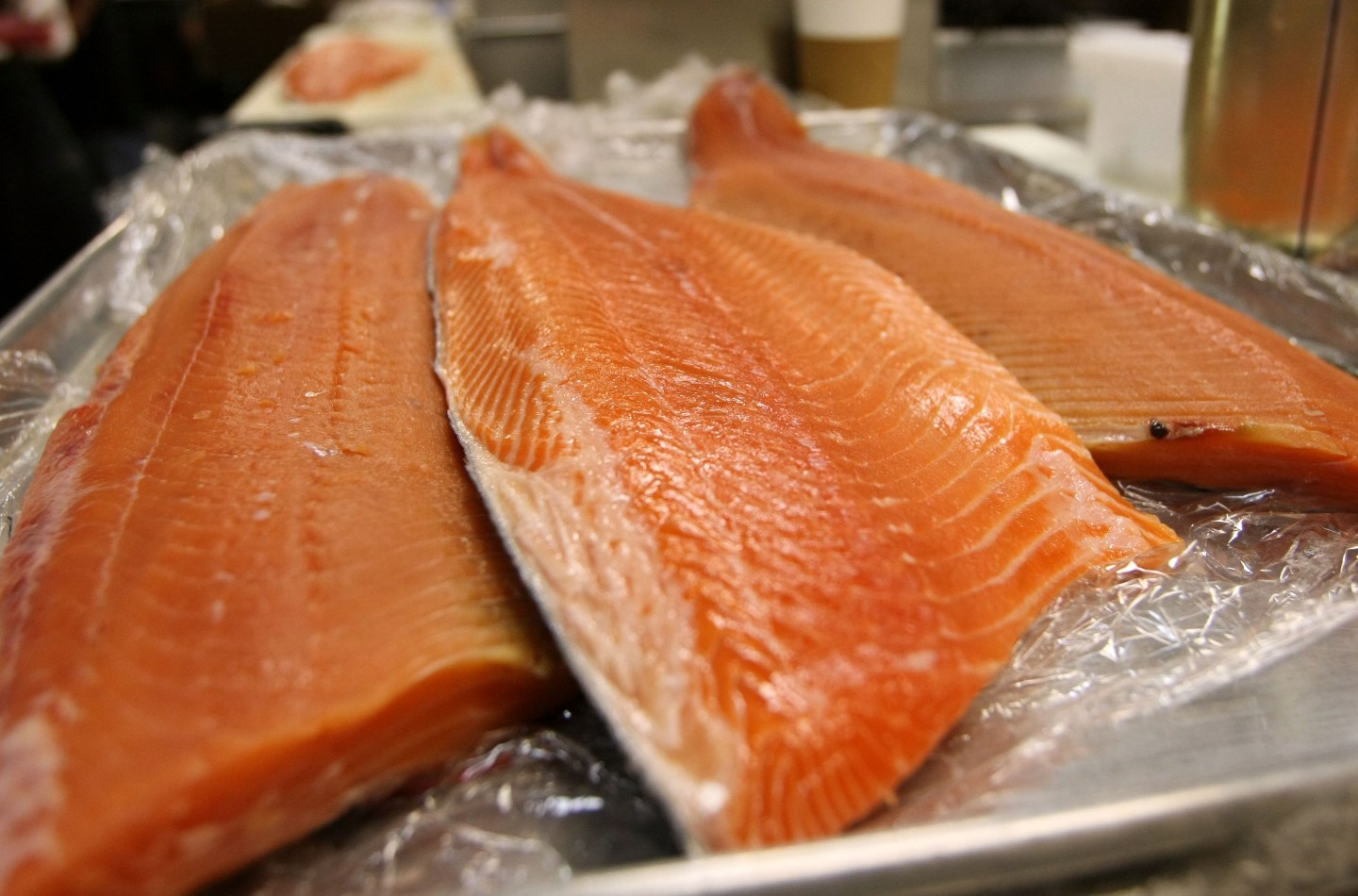 SAN FRANCISCO - APRIL 11: Fresh wild and farmed Loch Duart salmon filets are seen on a tray at the San Francisco Fish Company April 11, 2008 in San Francisco, California. The Pacific Fishery Management Council voted Thursday afternoon to cancel the chinook fishing season along the coast of California and Oregon in hopes of reversing the dwindling numbers of salmon. Farmed salmon will be a popular replacement for fresh wild salmon on seafood store shelves during the fishing ban. (Photo by Justin Sullivan/Getty Images)
Photograph by Justin Sullivan — Getty Images

Prices of salmon and squid have soared as disease and weather hurt global supplies, and British fish sellers say the Brexit-related drop in its currency may be the next scourge.

The British pound has fallen to a 31-year low on fears about the effect of the June 23 vote to leave the European Union, leaving it 13% weaker against the dollar.

That may make imports pricier, including the cod and haddock used by roughly 10,500 fish and chip shops in the 380 million meals they serve up each year.

Large retailers like Tesco and Asda have long-term supply contracts and hedges that shield them from near-term volatility. But independent players—which also include roughly 950 fishmongers, according to estimates by research firm Seafish—are more exposed.

The Oceans Will Contain More Plastic Than Fish by 2050

“We tried to buy some shellfish this morning … and our suppliers advised us to buy now because the price is going to go up,” Gary Hooper, owner of GCH Fishmongers in Bedford, England, said. “If I had a big freezer I’d buy it now.”

Hooper spends at least 3,000 pounds a week on fish, including bass and bream from Turkey and Greece, tuna from Sri Lanka and swordfish from Brazil. He reckons shellfish costs could rise 20%, but knows he would lose customers if he tried to pass that on.

“What we have to try and do is switch the consumer into local fish,” he said.

The vast majority of the fish Britons eat is imported, mostly from Norway and Iceland, while much of the domestic catch is exported. Many UK fishermen hoped a Brexit would free them from EU fishing quotas, but the impact on the sector, which has a large showing in pro-EU Scotland, is unclear.

U.N. Warns that 90% of World’s Fish Stock Is Fully or Overly Fished

Norway, the world’s top salmon exporter, is benefiting from salmon prices that are 60% higher than a year ago, due to disease and a prevalence of sea lice in south America.

Martyn Boyers, chief executive of the fish market in the northern port town of Grimsby, says the pound’s weakness, which is also down about 10% against the Norwegian crown, could reduce Britain’s lure as a market, even for cod and haddock.

“In the end, if the Icelandics and Norwegians who send white fish don’t think the price they’re getting is good enough, it won’t come here at all,” Boyers said.

Britain is Norway’s third-biggest market for seafood, worth seven percent of total sales in 2015, with a value of about 5 billion Norwegian crowns ($591.90 million). Norway sells mostly salmon to Britain (3.4 billion crowns), followed by cod (600 million crowns) and haddock (450 million crowns).

For more on fish and agriculture, watch:

“Those selling on the spot market will likely not see the current pound value as attractive and look for other alternatives,” said Jack-Robert Moeller, director in Britain for the Norwegian Seafood Council. “But regardless of whether you sell on the spot market or with long-term contracts, a weakening pound will lead to higher import costs.”

Fluctuating costs are par for the course at London’s bustling and wet Billingsgate Market in the shadows of Canary Wharf’s skyscrapers. Sellers there said fresh fish prices move every day based on supply, which is heavily reliant on weather.

One merchant who imports more exotic fish like tilapia and cuttlefish, said he moved prices in line with currency, while another said he hadn’t yet seen much change, as most frozen stock had arrived before the big drop or was priced in euros.

“Customers grumble for a while, but then get on with it,” said Paul Harris of Seahawk Marine Foods. “You still have to eat.”

How IoT Can Keep Fish on Your Table

Fresh fish prices across the UK rose in each of the last five months, according to the British Retail Consortium, bucking a three-year trend of overall deflation due to lower commodity costs and a retail price war as chains fight for fussy shoppers.

But it said retailers were hedged on currency for at least six to nine months.

“The time it takes for any price increases to make a re-appearance will depend on a combination of factors including the future value of the pound, commodity prices and any eventual impact of last week’s Brexit vote,” said Helen Dickinson, BRC’s chief executive.

Why Whole Foods Is Selling an Invasive, Poisonous Fish

The National Farmers Union has predicted that higher prices along the supply chain would lead to increased domestic production. That could be good news for food makers like Charlie Bigham, who tries to use as much British produce as possible in the supermarket pre-cooked dinners bearing his name.

“Our preference is to source from the UK, but we’re never going to buy our Parmesan from the UK,” Bigham said. His firm is now in “lots of discussions” with suppliers about prices.

“One of the things we need to consider is whether we put some price increases through to our retail partners. It’s obviously their choice … whether they pass those on to consumers.”