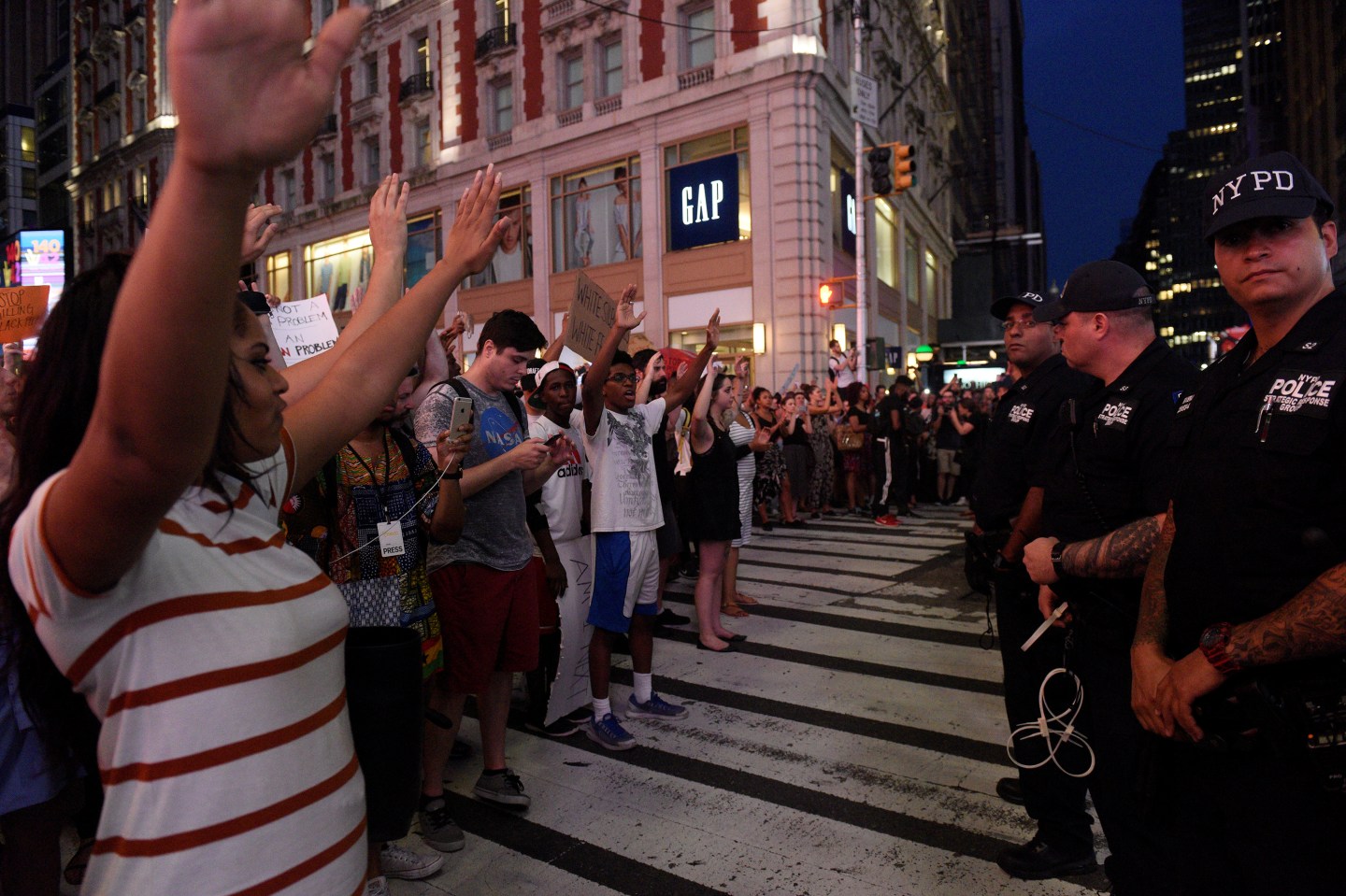 People hold their hands in the air as they yell "hands up, don't shoot!" during a protest for the killing of Alton Sterling and Philando Castile in the Manhattan borough of New York July 7, 2016. REUTERS/Darren Ornitz - RTX2K9J4
© Darren Ornitz / Reuters REUTERS

(TIME) – Thousands of demonstrators marched through New York City’s streets on Thursday evening to protest the recent deaths of Philando Castile in Minnesota and Alton Sterling in Baton Rouge, both shot and killed by police officers earlier this week.

The protesters started in Union Square at 5 p.m. and then marched up to Times Square, where some of them were handcuffed after sitting in the street and blocking traffic. Demonstrators chanted, “Black lives matter” and “No justice, no peace,” as they continued north toward Central Park.

Brittany Irving, a 30-year-old public defender with the Legal Aid Society in New York City, brought her 4-year-old son, Elias, to the demonstration. She compared him in age to the daughter of Diamond Reynolds, whostreamed the aftermath of Castile’s death on Facebook Live while her daughter was in the backseat. It was Elias’ second protest, she said; his first was a protest following the death of Eric Garner in a confrontation with police in New York in 2014.

Elias wore a shirt that read, “Stop killing us” in red letters.

“I hope he feels supported; I hope he feels that all lives will matter in his lifetime,” Irving said. “Because it didn’t happen in my lifetime, or my parents’ lifetime. My sweet little boy will be seen as a threat.”

Cynthia Turnquest, 47, of Westchester, N.Y., began protesting the deaths of black men at the hands of police after one of her former students at the Young Scholars Academy of the Bronx, Ramarley Graham, was killed by a police officer.

Jaron Benjamin, 36, vice president of community mobilization forHousing Works, a nonprofit that supports people with AIDS, said he is worried about raising his daughter and family in America after the recent violence.

“I’m worried that with any interaction with the police, there’s nothing I can do to avoid being murdered,” Benjamin said. “I want to tell my grandchildren how our generation took the streets and made the deaths of black men at the hands of police intolerable. But I don’t know how we’re going to get from here and now, to that.”