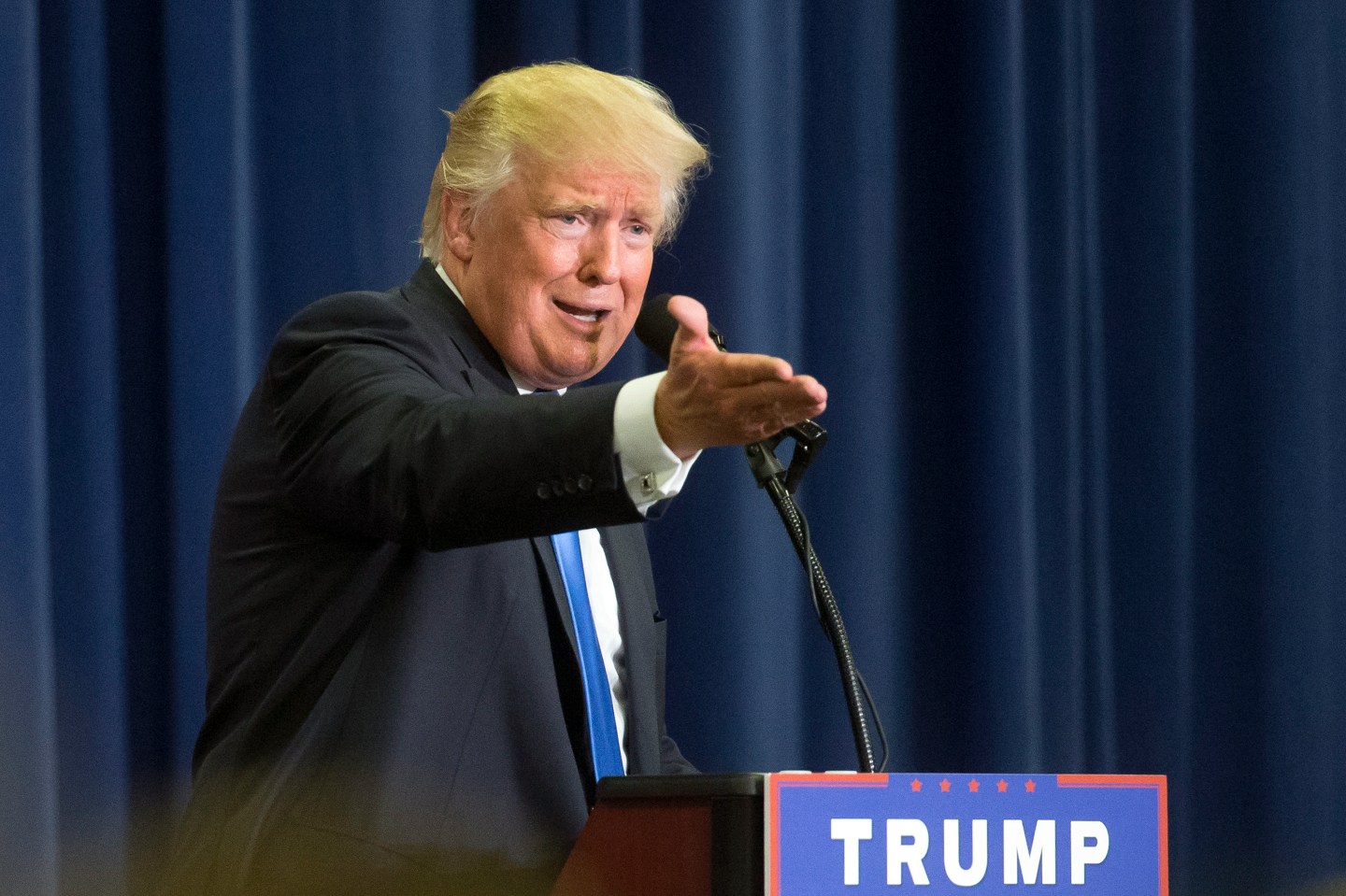 It was an opportunity for Donald Trump to hone his message and focus his ire on Hillary Clinton’s emails and the criminal indictment he and his fellow Republicans say she deserved and unjustly dodged.

Instead, the presumptive Republican presidential nominee chose to interrupt his Wednesday night rally with an aggressive defense of a weekend tweet condemned as anti-Semitic, reminding anyone who may have been watching of the criticism that his campaign turns a blind eye to bigotry and attracts the support of white supremacists.

“I said, ‘You shouldn’t have taken it down,” Trump told a crowd of supporters in Cincinnati on Wednesday night, bringing up on his own the Saturday tweet that featured what many saw as a Star of David and the words “Most Corrupt Candidate Ever!” placed over a picture of Clinton and a pile of money.

“They took the star down,” he added. “I said, ‘Too bad, you should have left it up.’ I would rather have defended it.”

The furor over the tweet, posted at the start of a holiday weekend during which few voters were likely paying attention to the presidential campaign, was quickly subsumed Monday by the decision of the FBI not to recommend Clinton face criminal charges for her use of a private email account and server while serving as secretary of state.

But for the second night in a row on Wednesday, Trump didn’t focus his remarks at one of his signature campaign rallies on Clinton’s actions — a subject of near universal condemnation among Republicans. Instead, he mixed in his attacks on the presumptive Democratic nominee with a defense of the tweet, as well as his Tuesday night remarks complimenting former Iraqi dictator Saddam Hussein as a killer of terrorists.

He later piled on, tweeting a picture of a children’s coloring book about the hit Disney movie “Frozen” that has a six-pointed star on its cover. He wrote, “Where is the outrage for this Disney book? Is this the ‘Star of David’ also? Dishonest media! #Frozen”

Where is the outrage for this Disney book? Is this the 'Star of David' also?
Dishonest media! #Frozen pic.twitter.com/4LJBpSm8xa

Trump’s son-in-law, Jared Kushner, also defended the billionaire on Wednesday as someone who “does not at all subscribe to any racist or anti-Semitic thinking.” Trump’s daughter Ivanka converted to Judaism and she and Kushner are raising their children in the faith.

Kushner said in a column published in the newspaper he owns that “blaming Donald Trump for the most outrageous things done by people who claim to support him” is a standard to which no other candidate is held.

There is no evidence Trump has consciously courted people who espouse hate speech, but he has repeatedly retweeted messages from Twitter users with questionable profiles. Late last year, for example, Trump retweeted inaccurate crime statistics that vastly overstated the percentage of whites killed by blacks.

His team also wound up — accidentally, it said — choosing as a delegate to the upcoming Republican National Convention a white nationalist leader named William Johnson whose group paid for pro-Trump robo-calls during the GOP primary.

“On numerous occasions, we’ve had to respond to tweets and retweets and delegates, often involving anti-Semitism and other kinds of bigotry,” said Jonathan Greenblatt, the CEO of the Anti-Defamation League. “And now this.”

The actions have also annoyed Republicans who find themselves forced to answer questions about Trump’s behavior.

“Look, anti-Semitic images, they’ve got no place in a presidential campaign. Candidates should know that,” House Speaker Paul Ryan said this week in a radio interview, calling on Trump to “clean up” his social media operation. He noted that he’d previously spoken out forcefully when Trump “failed to disavow white supremacists.”

Trump was also criticized by Ryan and other Republicans for failing during the primary season to immediately denounce the tacit endorsement of former Ku Klux Klan Grand Wizard David Duke, who once told his radio show audience that a vote for any other candidate “is really treason to your heritage.”

Trump launched his campaign last summer with a speech that accused some immigrants from Mexico of being rapists and bringing drugs into the country. He later vowed to temporarily bar the world’s more than 1.5 billion foreign Muslims from entering the U.S., a position from which he recently backed away.

That rhetoric has struck a chord with far-right groups, whose leaders say they’re seeing a resurgence of interest in their message thanks to Trump, who has become a popular topic of conversation on internet message boards such as Stormfront.org. Don Black, the site’s publisher, said earlier this year that he’d seen a spike in traffic since Trump announced his candidacy.

Black, who lives near Trump’s Mar-a-Lago resort in South Florida, said he never expected the billionaire to become “the great white hope” for those who frequent his site. But, he said, “white middle America has become demoralized.” Thanks to Trump, he said, “for the first time it’s OK to talk about some of these issues that affect our survival.”

Trump insists he’s done all he can to repudiate the support of people such as Black and Duke, but that’s done little to dampen their enthusiasm for his campaign.

Duke said Tuesday on his radio show that there was “no way” the star depicted in the Clinton tweet was anything other than Star of David, and he tweeted out his own version of the image with an unmistakably anti-Semitic message.

Johnson, the treasurer of the white nationalist group that ran the pro-Trump robo-calls during the primary and is planning to air television ads backing him, said that while Trump may not be trying to win their support, they’re nevertheless attracted to his message. He’s not bothered by the fact Trump dumped him as a delegate.

“He’s certainly not trying to pander to our crowd. Because our crowd is so ineffectual and so powerless,” Johnson said. “But the positions he takes naturally draws us to him.”