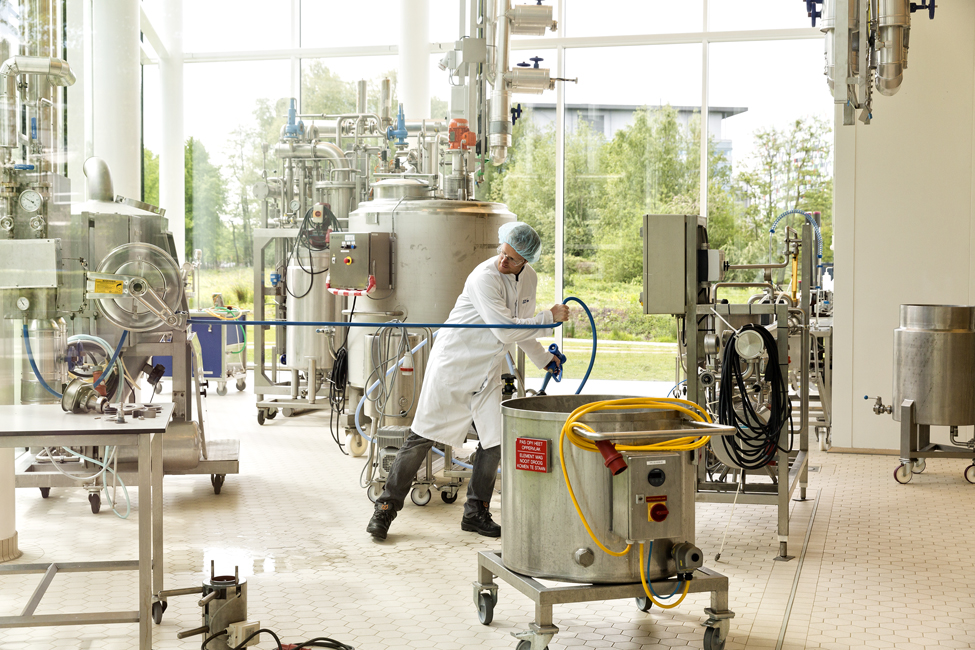 UTRECHT, NETHERLANDS - MAY 13: Pilot plant for small scale productions of infant food and medical nutrition at the Nutricia Research lab on May 13, 2015 in Utrecht, Netherlands. (Photo by Michel Porro/Global Assignment by Getty Images for Fortune)
Photograph by Michel Porro for Fortune Magazine

France’s Danone said on Thursday it would double the size of its U.S. business by buying organic food producer WhiteWave Foods in a deal that values the company at $12.5 billion including debt.

The purchase will help the French company to pursue affluent consumers by adding WhiteWave’s popular health food offerings such as Silk almond milk and Earthbound Farm Organic salad to its portfolio, as it struggles with setbacks in more challenging markets such as Brazil and Russia.

It is the first major transaction by Emmanuel Faber who took over as Danone’s chief executive in 2014 and has vowed to return the group to “strong profitable and sustainable growth” by 2020.

Danone(DANOY), best known for its yoghurts Activia and Actimel, is offering $56.25 per share in cash for its largest acquisition since the purchase of Dutch group Numico in 2007.

“We are creating a truly global leader in line with lasting consumer trends for more healthier options,” Faber told a call with analysts.

By 8:45 a.m. GMT, Danone shares were up 6% at 67.15 euros, leading gainers on the CAC-40 index of French blue chips as investors welcomed the deal despite the premium being paid.

WhiteWave’s products have outperformed mainstream packaged food businesses in recent years as they are in line with a consumer shift toward natural foods and healthier eating.

WhiteWave (WWAV) has been seen as an attractive takeover target since its spin-off from Dean Foods, especially for companies like General Mills and Campbell Soup that have been buying healthier brands or reformulating their existing products.

“WhiteWave is the fastest growing U.S food company (10 percent Compounded Annual Growth Rate like for like sales over the last 3 years, 20 percent including acquisitions) and an excellent fit with Danone, focusing on organic, dairy foods,” said Canaccord Genuity Limited analysts.

WhiteWave generates $4 billion of sales and Danone said it will be able to achieve synergies of $300 million by 2020, representing 8% of WhiteWave’s 2015 sales and 80% of WhiteWave 2015 Earnings Before Interest and Taxes.

The deal, which will be 100% debt financed and will boost earnings per share from the first year after closing, was approved by the boards of both companies.

“This transaction will create a leading U.S. refrigerated dairy player, as well as one of the top 15 largest U.S. food and beverage manufacturers,” Danone said.

After the deal, which is expected to close by year-end, Danone’s North America business will increase to 22% of Danone’s total portfolio from 12%.