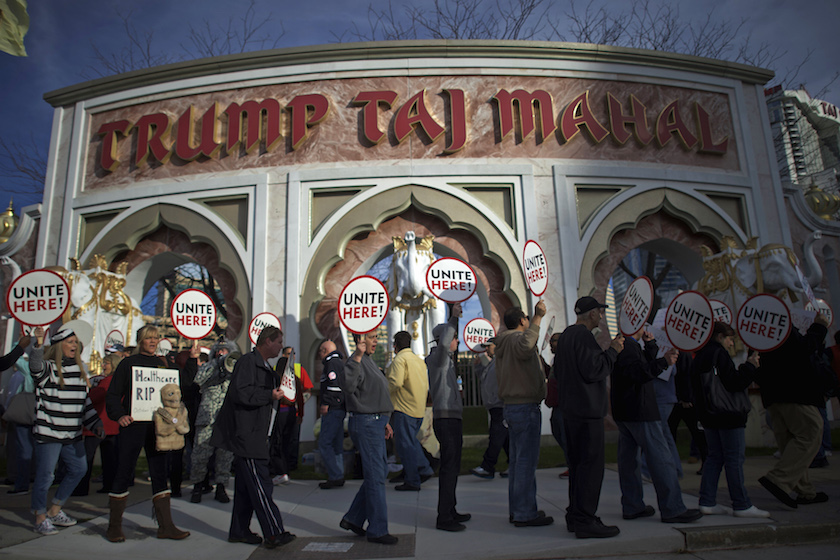 Donald Trump’s presidential campaign has capitalized on the anger of working-class Americans, whose incomes, benefits and job prospects have fallen over the past three decades. But a new report from Hedge Clippers and Take on Wall Street, union-backed activist groups that target the finance industry, says that one of Trump’s most public backers, and one Trump regularly mentions, billionaire investor Carl Icahn has a history of treating workers poorly.

The supporting evidence: Icahn’s investments have resulted in the loss of more than 35,000 jobs in major U.S. industries as well as the elimination of pensions or health benefits for more than 126,000 American families, concludes the report, which Fortune has exclusively obtained. The report is scheduled to be released on Wednesday.

“Icahn is what everyone hates about the American economy who’s not a billionaire,” says labor activist Michael Kink, one of Hedge Clippers’ leaders. Kink calls Icahn the “OG corporate raider,” a reference to the hip-hop term for original gangster.

The 80-year-old Icahn, worth $16.9 billion according to Forbes, pioneered what is now called shareholder activism. Icahn was one of the first so-called corporate raiders, a group of investors who took on companies, often pushing for take-overs, break-ups or cost-cutting layoffs, that gained steam in the stock market boom of the 1980s, the era in which Icahn and Trump became fabulously wealthy. More recently, the controversial strategy has gone mainstream, with those practicing the investment approach, primarily hedge funds, calling themselves activist investors. But despite the rebranding, the report by Hedge Clippers and Take on Wall Street says while the activist hedge funds have grown rich carving up companies, their gains have come at the expense of workers, often resulting in layoffs and lost benefits.

“There is no question there is a lot of economic damage strewn across our economy and a lot of anger about the way workers have been screwed,” says Kink. “But the fact is that Carl Icahn is one of the biggest and most important guys doing the screwing.”

Icahn says Hedge Clippers has him all wrong. “The companies I own and control employ 93,000 people. Most of these companies were bankrupt when I took them over with very few people and very little hope,” Icahn, who owns or controls 12 companies through his Icahn Enterprises (IEP) holding company, told Fortune.

The new union activists’ report titled, “The Dangerous Deeds of Carl Icahn,” comes just as one of the labor woes it details is heating up. On July 1, 1,100 unionized workers at Trump Taj Mahal Casino, which is now owned by Icahn, went on strike to try to claw back some of the cutbacks to their benefits and pay that were taken away during the Trump casino’s last trip to the bankruptcy courts.

Few businessmen have had a closer relationship with Trump than Icahn in Atlantic City, where Trump began building his empire in the 1980s. Icahn eventually became the sole lender to Trump Entertainment, buying up debt in Trump properties. As Trump has pulled out of Atlantic City and the casino business, Icahn took it over.

Trump has said he fully exited Atlantic City seven years ago, and that his timing was perfect.

Icahn has shut down one casino, Trump Plaza, which put 1,000 people out of work. To avoid a similar fate, workers at Trump Taj Mahal were forced to take a 35% pay cut, giving up their health insurance, $3 million in pension contributions and paid lunch breaks, the report states.

According to Hedge Clippers (and documents filed in the bankruptcy proceedings), those cuts were made at Icahn’s behest, to keep him from closing the doors and putting almost 3,000 people out of work. Icahn took control of the Taj Mahal in February, when the casino company emerged from bankruptcy for the fourth time.

In a statement released Friday about the strike, the Taj said that Icahn Enterprises had invested $82 million in the casino and had offered increased health benefits to union members. The workers turned it down. “They are offering to give us slightly more than nothing,” says Unite Here spokesman Ben Begleiter. Most of the union employees earn less than $12 per hour and half are relying on taxpayer-financed health insurance, he added.

The workers may soon get added support from Hillary Clinton. The presumptive Democratic nominee for president will make a campaign speech in Atlantic City Wednesday and may join the Taj Mahal picket line, according to individuals familiar with her plans.

Trump has been accused of milking his casinos of cash, leading to the bankruptcies. But Icahn has also done well in the gaming business: Before the latest Trump bankruptcy filing, he had received $350 million back from the casino company, in part because he was charging 12% on the money he lent it, according to Hedge Clippers.

The 18-month-old activist group has gained notoriety for its protests at hedge fund mansions in the Hamptons and Greenwich, Conn., disruptions at hedge fund conferences in New York City and an effort to convince public pensions to withdraw money from hedge funds whose managers are charging high fees. Hedge Clippers’ biggest backer, The American Federation of Teachers and its president Randi Weingarten, have long been supporters of Hillary Clinton’s presidential bid. The new report–the group’s 30th— is an indication the movement is expanding beyond hedge fund managers to focus on this year’s presidential campaign—and billionaire supporters of Trump. Icahn is the first Trump financier that the group is hammering, but the activists say others will soon get similar treatment.

Hedge Clippers is also working with Take on Wall Street—a union-backed lobbying group that is focused on eliminating the carried interest tax break and reinstating the Glass-Steagall banking law. The two are planning a protest on Icahn and Trump in New York City later this month.

The new report looks at 10 Icahn investments, starting with his famous takeover of TWA in 1985. “He pushed to make a number of controversial decisions that critics said made him hundreds of millions of dollars but ultimately resulted in TWA declaring bankruptcy multiple times, being bought out by American Airlines, and laying off and cutting the pensions of pilots and flight attendants,” the 28-page report states.

It also details Icahn’s role at such companies as Yahoo, which laid off 1500 employees under pressure from the activist investor to sell to Microsoft in 2008; Time Warner, which got rid of 1100 people in 2006 in a deal with Icahn, who demanded $500 million in cost reductions; and AIG, which plans to either eliminate or move abroad more than 7,000 jobs since Icahn began pressing for changes last year.

Icahn, the report notes, was also Trump’s choice to be Treasury Secretary. “If Donald Trump wants him to run the economy, American workers should run for cover,” says Hedge Clippers’ Kink.