How a Second Brexit Referendum Would Kill the EU 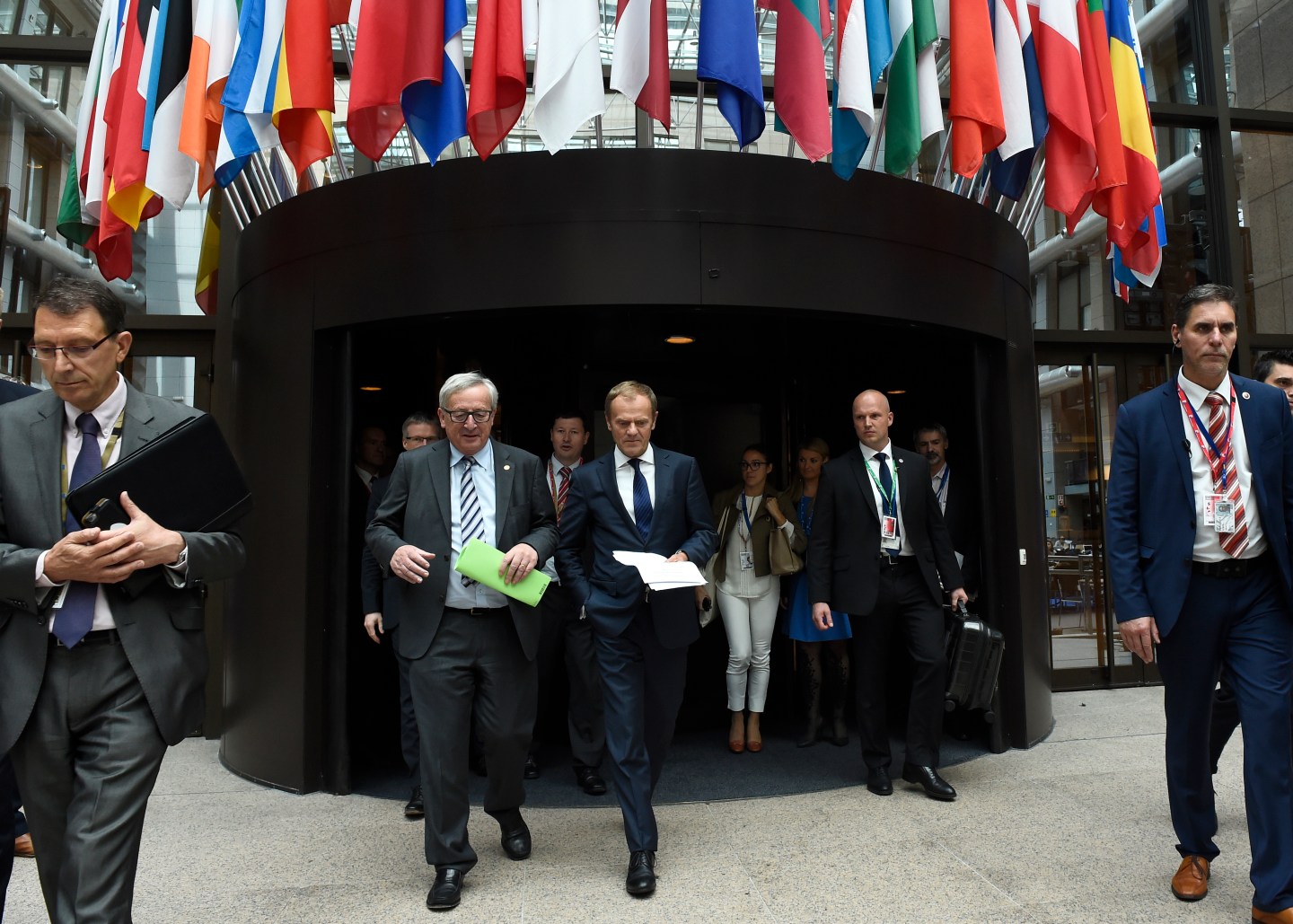 EU Commission President Jean-Claude Juncker (L) and EU Council President Donald Tusk (R) talk prior to give a press conference during a EU Summit meeting at the EU headquarters in Brussels on June 29, 2016. European leaders met on June 29 without Britain for the first time in 40 years to prepare for life after the Brexit bombshell, as the race began to succeed Prime Minister David Cameron. The 27 EU leaders will also hold a summit -- without Britain -- in Bratislava on September 16 to discuss further the fallout from Britain's decision to leave the bloc, Tusk said. / AFP / JOHN THYS (Photo credit should read JOHN THYS/AFP/Getty Images)
Photograph by John Thys — AFP via Getty Images

Liubomir K. Topaloff is an associate professor of political science at the School of Political Science and Economics at Meiji University.

The Brexit referendum results provoked an unprecedented upheaval. Within hours last Friday, a petition to the British Parliament called for a second referendum, and in just a week, over 4 million people have signed it, raising the hopes that not all is lost for the “remain” campaign. According to U.K. law, any petition with over 100,000 signatures requires consideration by the Parliament. But attempting to reverse a Brexit would completely ruin the EU.

Democracy, at least procedurally, is based on voting. This is, indeed, the meaning of “rule of the people,” in which one man—one vote principle is valid. But democracy is a lot more than that, too. The British philosopher and politician Edmund Burke, who is widely credited as the founding father of contemporary conservatism, declared in 1790 that Britain is a representative democracy, not a direct one, where “your representative owes you, not his industry only, but his judgment; and he betrays, instead of serving you, if he sacrifices it to your opinion.” Unlike in representative democracy, in the direct, or plebiscitary one, everything is decided by the will of the majority in a direct vote for issues, which is what the Brexit referendum was. So in the fallacy of direct democracy, a referendum gives the majority an irreversible win. Democracy becomes one man, one vote, but also one time. There is no recourse for those who happened to be among the losing 48% in favor of remaining in the EU—or for some of the 52% who wanted to leave but now have a “buyer’s remorse” after not knowing what they were voting for.

The expression that it is easier to turn an aquarium into fish soup than the other way around holds in full strength in the case of Brexit. Leading legal experts have been scratching their heads, arguing that the Brexit outcome has put the Parliament into a constitutional chicken-and-egg dilemma, where the new U.K. government cannot start the negotiation process under Article 50 of the Lisbon Treaty unless sanctioned by the Parliament. Such an act by the Parliament, however, would mean granting a blank check to the next U.K. government to implement whatever terms it succeeds to negotiate with the EU, but without knowing the actual terms of these negotiations. And that’s not going to happen. Rather, after new general elections, a next government may try to re-negotiate terms with the EU without leaving, despite what German Chancellor Angela Merkel declared.

The problem for any new U.K. government, however, will remain that at the very bottom of both direct and representative democracy remains the principle of a sacrosanct voting process that is based on vote counting, and the Brexit referendum results cannot just be ignored. It was, after all, Prime Minister David Cameron who proposed, agreed, and voted for a referendum on the U.K. membership in the EU. Even if the “leave” campaign won with just one vote, the results should still stand, even though the referendum is officially “advisory” only, or the meaning of the word “democracy” would be entirely lost from the description of the system. The victory was carried out with not one or two, but with precisely 1,269,501 votes. In one of the largest voting turnouts in recent U.K. history, it would be a travesty to disregard such a difference as unimportant.

While many “remain” supporters acknowledge the actual vote difference in absolute numbers, they still point that the overwhelming support for “leave” came from older, less-educated voters, who have less life left to live than the majority of the “remain” voters. This argument is also a perversion, because it puts value on the votes, an idea that has been decisively rejected by policy makers and theorists alike for a number of reasons. Not to the least because democracy is considered the greatest social equalizer in contemporary societies, and placing a weight on one’s vote that accounts for his or her age, income, education, social status, or physical fitness, if not else, will destroy this sense of equality, and with it, democracy itself.

The best face-saving way out from the current mess seems to pass through a new referendum. No such referendum will be possible, however, without first negotiating what many call an “emergency break” on the free movements of people in Britain, where some 3 million EU citizens currently live and work. Like it or hate it, the current EU system is founded on the so-called four freedoms of movement—goods, services, capital, and people. Even though the Brexit case points to the inherent antagonistic relationship between the first three freedoms and the last one, this is the deal for all member states, not just Britain. Without people, the U.K. membership will open the floodgates for other countries, notably the Netherlands, Denmark, Spain, Italy, France, etc., to follow suit. This is a no-go option for the EU, and even the contemplation of such a scenario seems rather naïve at the present.

The view from the EU is not unidirectional, either. In a classic good-cop-bad-cop scenario, two camps had showed different reactions immediately after the Brexit vote. On the “bad cops” side are the three top EU officials—European Council President Donald Tusk, European Parliament President Martin Schulz, European Commission President Jean-Claude Junker, and the Dutch Prime Minister Mark Rutte, whose country holds the EU presidency at the moment—called for Brexit without delay. Their concern about having another referendum seems to be the risk of “spreading the disease” to other member states with strong Eurosceptic movements. On the “good cops” side are Merkel and her powerful finance minister, Wolfgang Schäuble, whose main concern doesn’t seem to be contagion, but how to calm the markets. Both want to prevent the EU from falling into oblivion, or disintegrating under pressure from the forces of globalization.

While Brexit has already considerably weakened the EU, the panic and shock are far greater than the actual damage, and the EU is far from being morbidly wounded. If anything, an EU of 27 may be able to deepen integration in the areas of security, economic regulation, and freedom of movement of people, without Britain putting brakes. A second referendum, however, will surely destroy the EU, because it wouldn’t cure the illness at the heart of the Brexit ordeal. The outcry from the “leave” supporters would only pour oil into the Eurosceptic brethren across the continent, fueling the feeling of helplessness against the powerful cabal of EU bureaucratic elites who are determined to hold onto their power, and will run referendum after referendum, until they get what they want—just as they have done so many times in the past. A second referendum, then, will embody all that is wrong with the EU, even to the unbiased bystanders in other EU member states.

From a practical point of view, the EU will also have much more negotiating power vis-à-vis the U.K., with the country outside the bloc. Inevitably, Britain will have to strike some association agreements with the EU, similar to the ones Norway, Switzerland, and Iceland have in order to regain access to the single European market. But even then, Britain runs the risk of finding itself in a less advantageous position compared to outsiders, such as the United States, because of bad blood from the Brexit vote and the loss of economic clout. Sadly for the U.K., any such “Norway option” will just mean the same responsibilities as before, most likely including freedom of movement of people, but less negotiating power. For once, the EU must maintain a unified position behind its own interests, especially when the issue of EU citizens in the U.K. will be the main issue on the table, with or without an actual Brexit.

What the EU and future U.K. government should do and what they will actually end up doing are two separate things. Despite the high rhetoric from both sides, the most probable course of action will be neither Brexit or Bremain, but something in between. While mired in legal debates that will bore the public to death, U.K. and EU political leaders will muddle through with protracted and boring negotiations until the public’s emotions calm down. Then, they will seek a practical solution that will be somewhat satisfactory for all parties. Post-Bexit politics seems to be slowly turning into explaining why this referendum shouldn’t matter, and who must be blamed for that. This political shilly-shallying will only add to the growing cynicism of the voters, and their greater embrace of populist “straight-talkers.”

The result, then, will be a painfully predictable one: even bigger disappointment and disillusionment that will inevitably lead to the next EU crisis. The disintegration of political systems does not start with the expressive wish of leaders to do so, but usually because of their own mediocrity to pull themselves by the hair from the swamps of their own political waste.