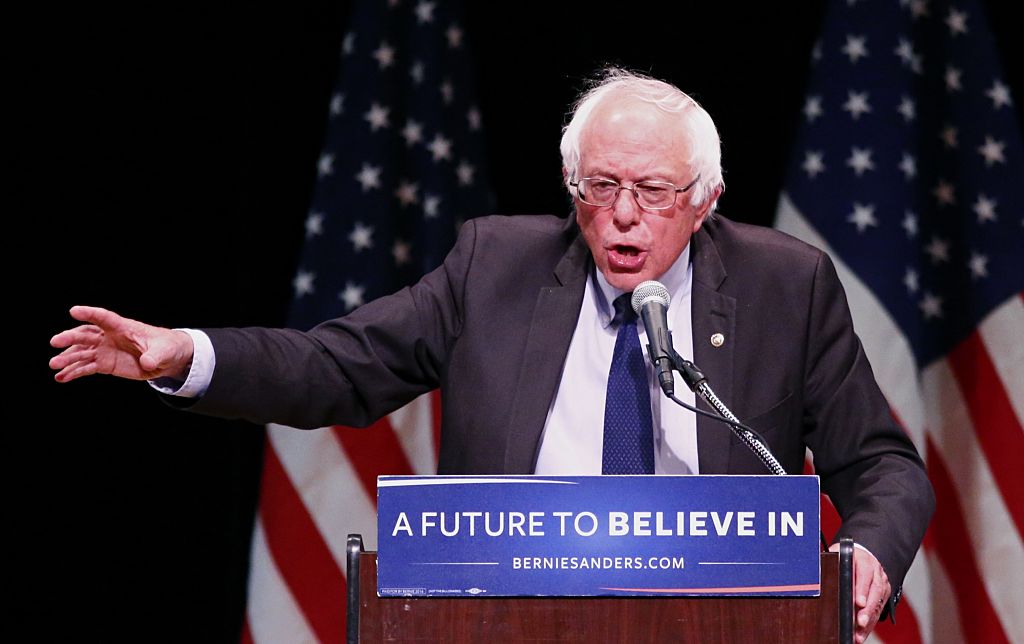 In a fast-moving news cycle that has already turned to the election battle between Donald Trump and Hillary Clinton, Bernie Sanders has quickly become a sideshow.

But that did not stop the Vermont Senator from defiantly promising to continue the political revolution in a town hall on Thursday, giving a glimpse into his possible future role in the Democratic Party in which he campaigns for progressive candidates across the country.

Speaking with the cadence and conviction of a viable candidate in midtown Manhattan, Sanders again did not concede the nomination—he lost a large majority of votes and delegates in the Democratic primary to Hillary Clinton—and did not endorse his opponent.

Instead, Sanders repeated the familiar rallying cry of his campaign—for nearly 80 minutes. Still able to pack a theater with supporters, bring a screaming crowd to its feet chanting “Run, Bernie, run,” he gave a free-form version of the stump speech he gave hundreds of times in the past year. There were improvised highlights.

“Every time I say it, and I look at it and I think about it, it DISGUSTS me!” Sanders said, “where in America the wealthiest country in the history of the world, the bottom 40% of our people own NOTHING and many of them are in debt.” And on the environment: “I’ve got seven beautful grandchildren and I will be DAMNED if i leave them a world that is not habitable.” And the contributions to his campaign, which Sanders said came from people making under median income, which brings “tears” to his eyes.

Sanders promised to help defeat Donald Trump and said he would campaign as much as he needed to. “Of course we have to defeat him, and I intend to do everything I can if I have to run all over this country to do it,” Sanders said.

“But that is not good enough!” he continued. “What we have got to do is continue the vision of transforming this country.”

Sanders also previewed a role he will likely play in the Democratic Party. He said that the next day in Syracuse, he was going to campaign for “a guy who is running for the United States Congress” and later in California for a “woman running for the state Senate.” (He did not name them, and two press secretaries did not immediately respond to request for comment.) “We’re going to go all over this country because that is what the political revolution is about!” Sanders said.

Sanders’ idea, it appears, is to help nurture down-ballot candidates for “school board, city council,” state and national seats and recruit progressive candidates, a role that progressives in the Democratic Party such as Massachusetts Sen. Elizabeth Warren have sought to play as well.

The policy demands Sanders has made were all included in the speech: $15 minimum wage, free college tuition, a medicare-for-all program, a trillion-dollar infrastructure program. “And you know what else we need to do when we talk about…” he said often, repeating an often-employed segue from the campaign trail.

Sanders also predicted that he could bring to the convention floor a modern-day version of the Glass-Steagall Act to separate investment and commercial banking.

And despite Sanders own admission he is unlikely to win the nomination, many in the audience said they would not vote for Clinton in a general election, their spite for Trump aside. “I don’t see myself being able to vote for Hillary,” said 53-year-old Kathy Coughlin, a retired assistant prosecutor from New Jersey who said she is a registered Democrat and voted along party lines for decades. “She’s not a good choice.”

And if anyone in the audience believed Sanders will be sidelined by the Trump-Clinton election, he tried to dispel the notion. “Never, Never lose your sense of outrage!” he cried.