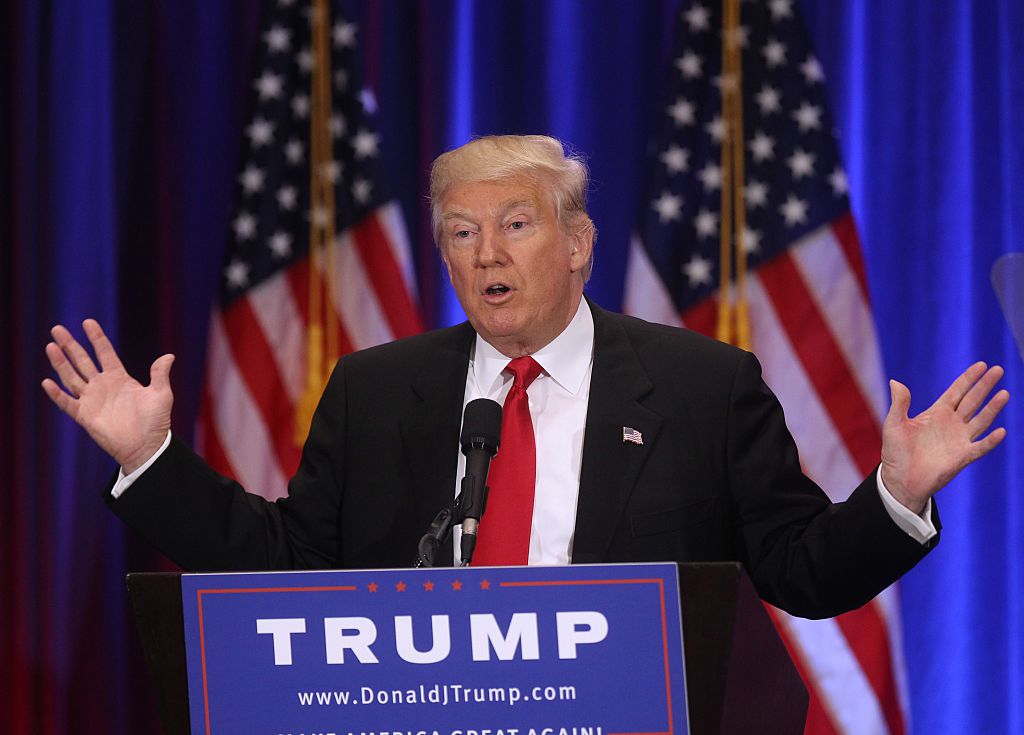 He accused Clinton of announcing a withdrawal from Iraq that wasn’t on her watch, pulled numbers out of nowhere on her plan for refugees and went beyond the established facts behind the killing of the U.S. ambassador to Libya in stating starkly that she “left him there to die.” In doing so, he assigned her far more influence in the world than she exercised as secretary of state.

A look at some of his assertions and how they stack up with the facts:

TRUMP: “In just four years, Secretary Clinton managed to almost single-handedly destabilize the entire Middle East.” He blamed her for an invasion of Libya that “handed the country over to ISIS,” for making Iran the dominant Islamic power in the region and for supporting regime change in Syria that led to a bloody civil war. He charged that her “disastrous strategy” of announcing a departure date from Iraq created another opening for ISIS there.

THE FACTS: These statements make only passing acquaintance with reality.

There was no U.S. invasion of Libya. Clinton initially opposed but then sought credit for the NATO-led air campaign to help rebels overthrow Libyan leader Moammar Gadhafi in 2011. (Trump spoke in support of U.S. intervention at the time.) While the violence destabilized Libya, Islamic State inroads there have been more recent and are largely limited to a small coastal area of the country.

Arguments about Iranian domination of the Middle East predate Clinton’s tenure, going back a decade to the George W. Bush administration’s deposing of Saddam Hussein in neighboring Iraq.

While secretary of state, Clinton supported arming Syria’s moderate rebels, but the Islamic State group only arrived later. It’s unclear what effect such a policy would have had as President Barack Obama rejected the advice at the time.

And she had nothing to do with the “disastrous strategy” of giving a departure date from Iraq. It was the George W. Bush administration that announced the planned withdrawal of U.S. forces from Iraq in 2008.

TRUMP: U.S. Ambassador to Libya Chris Stevens and his staff “made hundreds and hundreds of requests for security. They were desperate. They needed help. Hillary Clinton’s State Department refused them all. She started the war that put them in Libya, denied him the security he asked for, then left him there to die.”

THE FACTS: Trump greatly exaggerates the security requests, not all of which were denied, and gets the history of U.S.-Libyan relations wrong. The reference to security requests appears to reflect the Republican-led House Select Committee on Benghazi’s tally of “requests/concerns” related to the diplomatic outpost in Benghazi. For many of those, there’s no record of denials. And some security upgrades did occur before the Sept. 11, 2012, attack that killed Stevens and three other Americans.

Clinton did not start the war in Libya. She supported a NATO intervention well after large-scale violence had broken out between Gadhafi’s forces and rebels. Nor did the conflict put Stevens or any U.S. diplomat in Libya. The U.S. had maintained a full-fledged embassy there since President George W. Bush re-established diplomatic relations with Gadhafi’s government in 2006.

Several congressional investigations have shown that Clinton had no role in military decisions related to Benghazi, and that it would have been impossible for U.S. armed forces to intervene in time to save Stevens.

TRUMP: “Hillary also wants to spend hundreds of billions to resettle Middle Eastern refugees in the United States, on top of the current record level of immigration.”

THE FACTS: For a businessman, Trump is shaky on his numbers. The entire U.S. budget for refugee resettlement is less than $1.2 billion a year — and that includes refugees from Cuba, Bhutan and the Democratic Republic of Congo. Even including the value of all future public benefits they might receive — and excluding their contribution to the country through taxes — Trump’s assertion about the cost of resettlement is still baffling.

TRUMP: “I started off in Brooklyn, New York, not so long ago, with a small loan and built a business that today is worth well over $10 billion.”

THE FACTS: Trump’s $1 million loan from his father was just the beginning of his family subsidies, which included a far larger inheritance, loan guarantees, and even occasional bailouts — one of which was found to be illegal by New Jersey casino regulators. As for the value of Trump’s business, every independent appraisal has found his assets to be worth far less than he says; Forbes says Trump is worth less than half what he claims.

TRUMP: “Hillary Clinton accepted $58,000 in jewelry from the government of Brunei when she was secretary of state — plus millions more for her foundation. The sultan of Brunei has pushed oppressive Sharia law.

THE FACTS: Clinton is not sporting Brunei bling.

In September 2012, she accepted a $58,000 jewelry set with gold, sapphire and diamond earrings, a necklace and bracelet, given by the queen of Brunei when Clinton visited for meetings and to inaugurate an English-language training program, according to the Federal Register. The gift was not to her, but to the United States.

Federal law prohibits officials from keeping such gifts unless they pay the estimated value to the U.S. government. According to the State Department’s protocol office, Clinton chose not to buy the jewelry, and instead turned it over to the General Services Administration — the standard procedure for most gifts from foreign leaders.

It’s true that Brunei is an Islamic nation that observes Sharia law and has been widely criticized for its human rights record, particularly when it comes to gays and lesbians.

But gift exchanges are standard practice. As with almost all gifts to all officials, the Federal Register notice says “non-acceptance would cause embarrassment to donor and U.S. government.”

TRUMP: “Our trade deficit with China soared 40 percent during Clinton’s time as secretary of state.”

THE FACTS: Trump’s claim is more than double the actual increase. From late 2008 through 2012, a period coinciding with Clinton’s tenure, the trade deficit with China rose 17.6 percent. Trump’s campaign may be using data from the end of 2009 through 2013, when the deficit did rise 40 percent, but that does not match up with Clinton’s time in office and leaves out a sharp, recession-induced drop in 2009.

More broadly, the secretary of state is not typically held responsible for the trade deficit, which mostly reflects the health of the U.S. and global economies, the difference in how much the nation spends and saves, and trade policies implemented by the U.S. trade representative.

TRUMP: “We are the highest-taxed nation in the world.”

THE FACTS: Closer to the opposite is true.

The U.S. tax burden is actually one of the lowest among the 34 developed and large emerging-market economies that make up the Organization for Economic Cooperation and Development.

Taxes made up 26 percent of the total U.S. economy in 2014, according to the OECD. That’s far below Sweden’s tax burden of 42.7 percent, Britain’s 32.6 percent or Germany’s 36.1 percent. Only three OECD members had a lower figure: Chile, South Korea and Mexico.

THE FACTS: Clinton has called for the United States to continue to accept refugees, including as many as 65,000 from Syria. But Trump is wrong about Clinton’s stance on refugee screening. She’s never said she would scale back the current refugee processing system. Under that system, a person’s beliefs are not generally a disqualifier for entrance into the U.S. Refugees are checked to make sure they don’t have criminal records or have been identified by intelligence agencies as having ties to terrorist organizations.

TRUMP: “She has pledged to grant mass amnesty and in her first 100 days, end virtually all immigration enforcement, and thus create totally open borders in the United States.”

THE FACTS: It’s not true that Clinton’s plan would create open borders. Her plan does call for a pathway to citizenship that would allow people currently in the country illegally to stay, but only after going through a series of steps to become a citizen. On enforcement, Clinton has called for focusing on “detaining and deporting those individuals who pose a violent threat to public safety,” but not ending enforcement outright.

TRUMP: “We will repeal and replace job-killing Obamacare. It is a total disaster.”

THE FACTS: Job growth has been solid by historical standards since Obama’s health care overhaul was signed into law in March 2010. Since then, employers have added nearly 14 million jobs and businesses have been on the longest hiring streak in the post-World War II era. And 2014 and 2015 were the two best years of private-sector hiring since the late 1990s. The unemployment rate, meanwhile, has fallen to 4.7 percent, an 8 ½ year low, from 9.9 percent when the law was passed.

THE FACTS: Trump’s proposed tax cuts are indeed massive, but most economists conclude they will create a huge amount of government debt. The nonpartisan Tax Policy Center estimates that Trump’s tax plan would slash government revenue by $9.5 trillion over the next decade. Trump hasn’t specified any offsetting spending cuts or other sources of revenue to make up the difference. That means the tax cuts would balloon the deficit. All that additional government borrowing could push up interest rates, the center concludes, and offset much of the economic benefit of lower taxes.