Inside Donald Trump’s High-Stakes Effort to Win Over Evangelicals 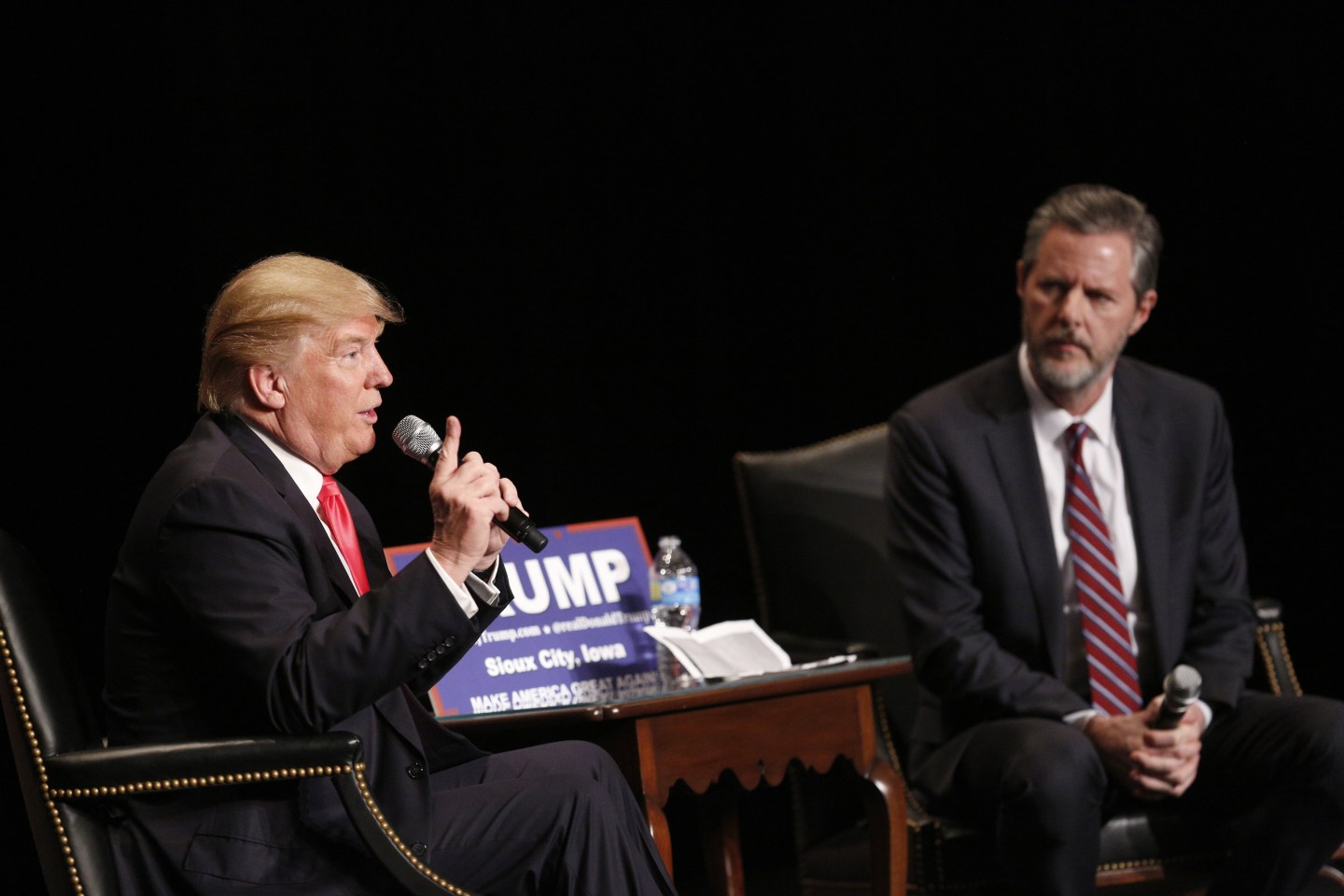 What started as a closed-door gathering of 400 social conservative leaders to test Trump’s values has grown to a daylong conference of 1,000, involving nearly all the traditional political influencers of the religious right. For some, it is an effort to get Trump to better understand their policy positions. For others, it is a late-breaking effort to try to get the GOP’s most reliable voter base on board with its most polarizing candidate in decades.

“We are trying to seek mutual understanding,” says event organizer Bill Dallas, president of United in Purpose, a 501(c)(4) committed to change American culture based on Judeo-Christian principles.

Former Arkansas Governor Mike Huckabee will moderate a 90-minute main session, where Trump will answer questions in front of the entire gathering. He’ll be introduced at the session by Liberty University president Jerry Falwell Jr., who endorsed Trump in January. Retired neurosurgeon Ben Carson will also participate. Falwell says he plans to introduce the crowd to the Trump he knows, not the Trump they may perceive him to be.

“He doesn’t expect you to agree with him on every issue or to endorse or condone his style of leadership,” Falwell says he plans to say. “If we all wait for the perfect candidate who has the demeanor of our pastors and agrees with us on every issue, including our personal theological beliefs, then we may all sit at home on election day for the rest of our lives. How many of you can honestly say that you even agree with your spouse on everything?”

Organizers have pre-selected questioners to ask him a total of between seven and 20 questions, depending on the time. The question topics were chosen in advance from themes that attendees submitted, and organizers negotiated the terms for the questions and who will ask them in advance with the Trump campaign, Dallas says.

“While we are talking to the media, we want to respect the privacy of the process,” he adds. Family Research Council president Tony Perkins, a member of the event’s steering committee member, adds that he hopes “to see how we could bridge the gap” between evangelicals and Trump. “We are not certain where he is, there are a lot of unknowns,” Perkins says. “There is reason for optimism and possibly hope.”

Trump is also slated to meet privately with the group’s steering committee and some of its donors for about a half hour before taking the main stage. For many, that will be the primary opportunity to speak frankly. Ralph Reed, leader of the Faith & Freedom Coalition, says he hopes to discuss “ways we can be fully integrated into the machinery and the grassroots of the campaign.”

After the main session with Trump, Perkins and others will lead a panel to take questions from participants to digest Trump’s replies and discuss action steps moving forward. Organizers will also present polling data of political and cultural trends. As the day concludes, Eric Metaxas, who has endorsed Trump—even last week calling him “our only hope” for the future of “virtue and faith”—will provide “a vision for America,” according to a statement. Organizers insist there are no plans to poll participants, or to call for a vote on what they hear from Trump. The event is “not intended to be political in nature,” “not a fundraiser or a campaign event,” and it will not “engage in debate,” according to materials sent to reporters.

Many of the event’s core organizers shared with TIME the questions they plan to ask Trump during the program.

Kelly Shackelford, president of the First Liberty Institute law firm, plans to ask about religious liberty and judicial nominations. Shackleford endorsed Senator Ted Cruz in the primary. “There is a real, palpable concern by people in all these different groups about the culture war against religious freedom that is going on,” he says.

Perkins, who also endorsed Cruz, wants to raise concerns about national defense. “One of the things I want to talk about is what has happened with our military, and how it has been used for social experimentation rather than defending America,” he says.

Gary Bauer, president of American Values and chairman of a PAC dedicated to electing conservative candidates to Congress, says he plans to ask how Trump plans to stop “the genocide of Christians and other religious minorities in the Middle East and parts of Africa by ISIS and other radical Islamic supremacist groups.”

Another participant will ask a separate question about foreign policy and national security, and what Trump plans to do to keep America safe.

Marjorie Dannenfelser, president of the Susan B. Anthony List, plans to ask Trump about his policy commitments regarding abortion. Trump has previously stated he is now pro-life—a shift from his past support for abortion—but he has committed to changing the GOP platform on abortion to include exceptions for rape, incest, and the mother’s life. “I don’t think he has been asked very often to explain how he got from A to B,” Dannenfelser says. “I think very often people’s instincts kick in when they hear somebody talk about their conversion, either it sounds authentic, or it doesn’t.”

For many attending, Trump needs to do more than clarify his policy—he also needs to motivate them in a more personal way. Penny Nance, president of the Concerned Women for America, is still deciding what her question will be, but she knows one thing—she wants to “take a measure of the man.” “We also tend to be the people that go door-to-door for candidates, and phone bank for hours, and put the flyers underneath the windshield wipers in the church parking lot,” she says. “He needs to win our hearts.”

Trump, meanwhile, is trying to shore up his own network of religious supporters, and that includes many of the participants of Tuesday’s gathering. Earlier Tuesday morning before the event, his team plans to gather a working faith advisory committee at Trump Tower, which will include Falwell, Reed, and others. Campaign surrogates have been working since mid-May to organize this group, and as TIME reported last month, Huckabee was being discussed as the group’s possible national chairman.

Televangelist Paula White, senior pastor of New Destiny Christian Center in Florida and a Trump supporter, has been organizing the group behind-the-scenes with Tim Clinton, president of the 50,000-member American Association of Christian Counselors, according to several people familiar with the project. Reed will also be part of the board, and will join Falwell and the rest of the group at Trump Tower before they all drive over to the bigger evangelical meeting.

“I think it is really important that [the campaign] folks are integrated into the grassroots,” Reed says. “I hope to offer to do everything I can do to help him connect with and win support of voters of faith.”

This story is published in partnership with Time.com. You can find the original version here.