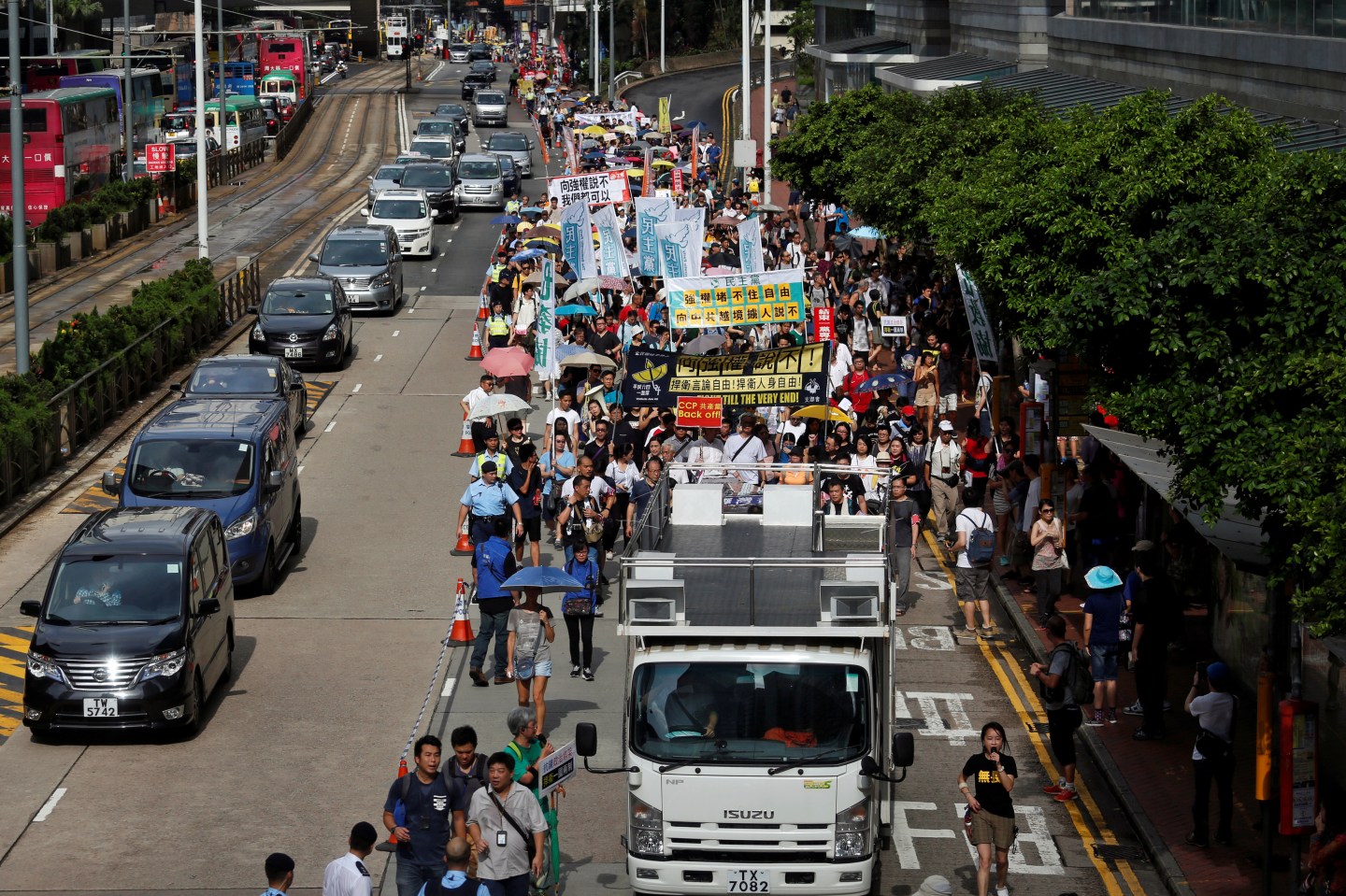 Over 4,000 people marched in Hong Kong on Saturday to protest against China’s detention of five booksellers whose shop published gossipy books about Chinese leaders, including President Xi Jinping.

The demonstration followed a march by 100 activists to China’s liaison office on Friday to protest against what they called the “cross-border abductions.” They said one bookseller was abducted to China from Hong Kong and another from Thailand.

The protesters’ account contradicts official statements that China’s law enforcement officials had done nothing illegal. The other booksellers were detained while in mainland China.

The arrest of the five men has prompted fears Beijing may be eroding the “one country, two systems” formula under which Hong Kong has been governed as a special administrative region since its return to China from British rule in 1997.

EU Warns China Over Its Detention of Hong Kong Booksellers

The protesters chanted “protect freedom of the press, freedom of publishing and freedom of speech” as they marched from the Causeway Bay Books shop to Beijing’s liaison office and demanded the release of Gui Minhai, a Swedish passport holder who is the only one of the five still in detention in China.

One freed bookseller, Lam Wing-kee, told reporters on Thursday he had been arrested in China and detained for more than eight months but his colleague Lee Bo, a British national, was abducted from Hong Kong by mainland Chinese authorities.

“Protesters admire how Lam Wing-kee, as an ordinary citizen, fought against the authority and exposed its lies. Many people told me they’re worried about the safety of Lam,” said Albert Ho, legislator of the Democratic Party, who organized the march.

Alvin Yeung, a legislator of the pro-democracy Civic Party, said the arrests challenged the “one country, two systems” rule, which guaranteed separate laws and freedoms in the former British colony not granted elsewhere in China for 50 years.

“We did not see any commitment from the central (Beijing) government. We have seen absolutely nothing done by the Hong Kong government to ensure the safety of these booksellers,” he said.

Hong Kong Secretary for Financial Services and the Treasury KC Chan told a radio program he did not think the incident would hurt investor confidence in the city.

Beijing’s Silent Prayer on Brexit Vote: Better In Than Out

Meanwhile, booksellers Lam and Lee have contradicted each other’s accounts of how Lee, the British national, had been arrested.

Lee said on Saturday he had never spoken to Lam about how he went to China and disputed other details Lam had given of his detention.

“Only Lee Bo can speak for himself,” Lee said. Responding to that, Lam said: “Even though Lee Bo is in Hong Kong, he has lost his freedom due to fear.”