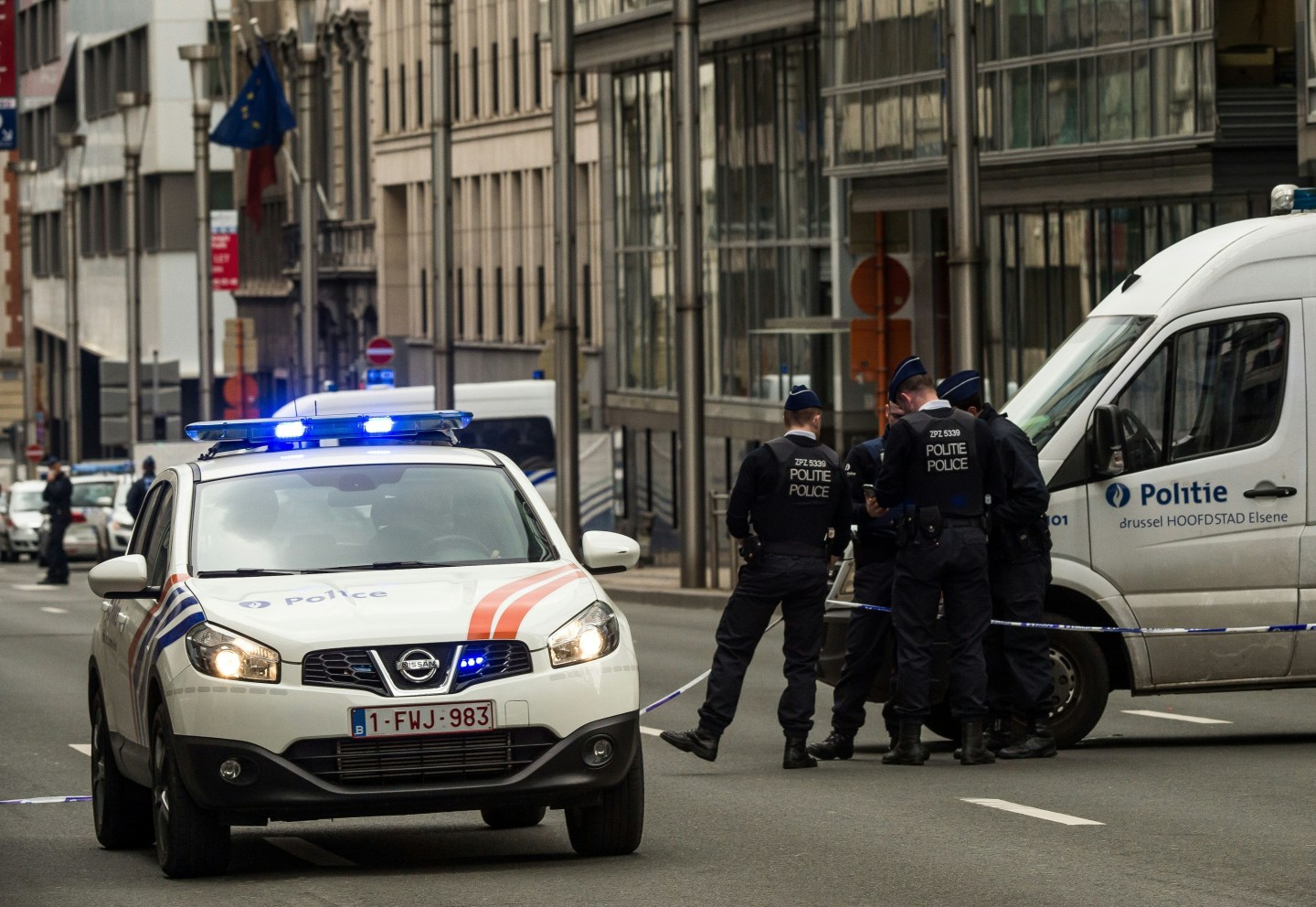 Policemem stand guard near a security perimeter set in the Rue de la Loi near the Maalbeek subway station, in Brussels, on March 22, 2016, after an explosion killed at least 11 people, according to spokesman of Brussels' fire brigade A string of explosions rocked Brussels airport and a city metro station on Tuesday, killing at least 13 people, according to media reports, as Belgium raised its terror threat to the maximum level. / AFP / PHILIPPE HUGUEN (Photo credit should read PHILIPPE HUGUEN/AFP/Getty Images)
PHILIPPE HUGUEN AFP/Getty Images

Belgian police arrested 12 suspects in a major anti-terror operation overnight amid security alerts in Belgium and France around the Euro 2016 soccer tournament and just three months after Islamist bombers wrought carnage in Brussels.

Belgian Prime Minister Charles Michel chaired a meeting of the government’s security council—which includes the ministers of defense, foreign affairs, home affairs and justice—on Saturday after the raids and said soccer-related events would go on as planned with extra security measures.

“We want to continue living normally,” Michel told a news conference. “The situation is under control.”

“We are extremely vigilant, we are monitoring the situation hour by hour and we will continue with determination the fight against extremism, radicalisation and terrorism,” he said.

Earlier on Saturday the Belgian federal prosecutor’s office said 40 people had been taken in for questioning and 12 among them were arrested “in connection with a criminal investigation concerning terrorism.”

No weapons or explosives had been found during the overnight searches, which also involved 152 garage lockups.

For more on terrorism investigations, watch:

Flemish public broadcaster VTM said the people arrested overnight were suspected of planning an attack in Brussels this weekend during one of Belgium’s soccer matches.

Areas where fans watch matches in Brussels were potential targets, as well as other crowded areas such as shopping centers and stations, Belgian media reported.

The Belgian crisis center in charge of coordinating security responses decided not to raise the security level to the maximum that would indicate an imminent threat of attack, Michel said.

Michel said extra security measures had been taken for some people but did not name them.

Why Belgian Police Are Warning Facebook Users About Their Reactions

Investigators have found links between the Brussels and Paris attackers, some of whom were based in Belgium.

On Monday a French police couple were stabbed to death outside their home in Paris in an attack claimed by Islamic State. In a video posted on social networks, the attacker, Larossi Abballa, linked it to the soccer tournament, saying: “The Euros will be a graveyard.”

A spokeswoman for Paris public prosecutor Francois Molins said two people close to Abballa would meet a judge on Saturday while a third one was released.

Separately, a judiciary source told Reuters on Friday a 22-year-old man suspected of planning attacks on tourists had been jailed on terrorism charges after being arrested at the start of the week.

Also on Friday police arrested and detained a 30-year-old man named as Youssef E.A, a Belgian national, on suspicion of taking part in terrorist activities in connection with the Brussels attacks.