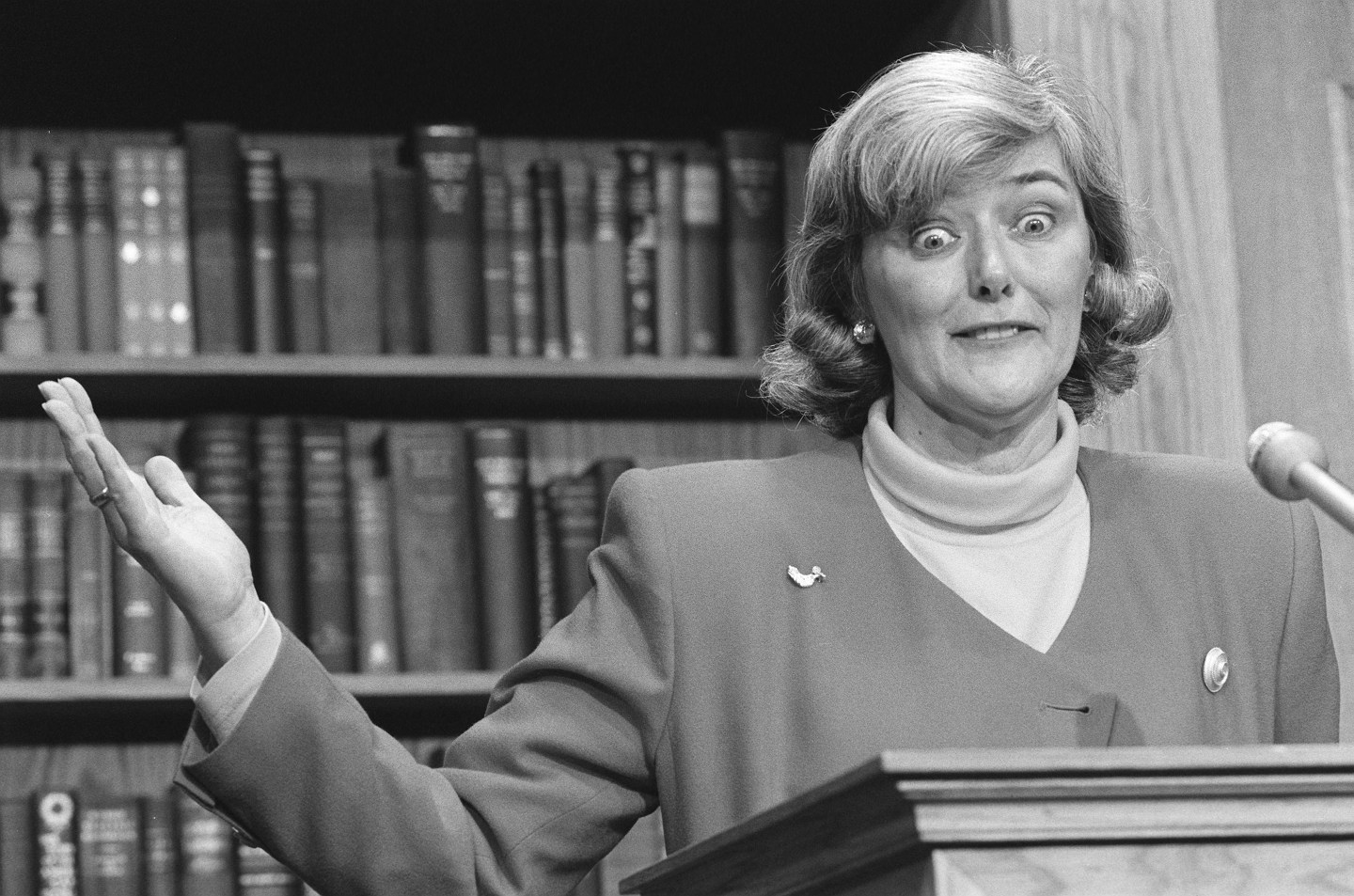 When Pat Schroeder was first elected to Congress in 1972, many women didn’t work at all, much less in one of the most famous buildings in the country. The congresswoman was the first female Coloradan elected to that body and one of 14 women serving at the time, compared to more than 100 today. Though some male colleagues tried to dismiss her as “little Patsy,” voters reelected Schroeder 11 more times.

The wit that helped make her so well-known back then—when one male colleague questioned how she could be a mother of young children and serve in Congress, she replied “I have a brain and a uterus. I use both”—is just as trenchant today. Motto spoke to the trailblazer from her home in Florida, where she’s working to help get female candidates elected, about what has changed for women since the 1970s and what hasn’t.

MOTTO: When you got to Congress, how hard was it to be taken as seriously as your male counterparts?

SCHROEDER: It was pretty hard. I remember Tip O’Neill, as [then Speaker of the House], used to introduce me a certain way and it always kind of made me crazy. And when he came to Denver, I thought: I will introduce him the way he introduces me.

So I introduced him as Millie O’Neill’s husband—and, “We all know Millie; she’s very involved in the arts”—and, of course, “the most important things in his life are his four children.” And gave their names and birthdays. And, “We’re not sure what he really wants to do with his life, but we really like him.” You know. And he’s looking at me like, “What are you doing?” And I said, “Oh, I thought that’s how you wanted to be introduced. I’m sorry.” And he got it. But it’s one of those thing where I was always Jim Schroeder’s wife, the lawyer in Washington and Denver. A mother of children. They weren’t sure what I was going to do. But it was nice to have me drop by the Congress for a couple years.

What do you think was behind that kind of introduction?

People just didn’t want to believe that you were going to be there, that you were going to stay there and you were trying to do something. I remember in 1992, when Clinton came in and we finally had 10% of the body being female, I remember one old guy saying to me, “Well, I hope you’re happy. This place looks like a f***ing shopping mall.” I said, “Where do you shop where there’s only 10% women?” They were all very startled that we were there and couldn’t believe that we were serious.

What else did you do to get that message across that you were just as serious as any of them were?

The main thing was to just keep getting re-elected and coming back.

You hate to speak in such generalities, because there clearly were some that dealt with you seriously, but I’ll never forget when I first got elected, one guy said to me, “I can’t imagine why you’re here. Politics is about Chivas Regal, beautiful women, $1,000 bills and Learjets. You don’t seem to like any of those.”

I think at that time, the average age was like 58 or 60. Basically all white. It kind of looked like the Cleveland Kiwanis Club. There was just this handful of women. And half of them had taken their husband’s position. Their husbands had been killed or died and they ran for the office, so they were really more like extensions of their husbands. There were only eight or nine of us that came in our own right. I had a particularly difficult time because I was married and I had a little kid. Even Bella Abzug said to me, “I don’t know how you’re going to do this.”

How did you react to that?

You just shake your head and say, “I’ll manage. Don’t worry.” And you don’t go around asking the males that question. No one ever says, “How are you going to be a father and a member of Congress?!” It was an interesting time.

Some of that is still here. Susan Wojcicki, CEO of Youtube, was on a panel recently where she was asked about her children and it launched a bunch of think pieces about whether a man would be asked the same thing.

Oh, yeah. I honestly think one of the reasons young women don’t understand what feminism is about is we did such a good job with Title IX, getting the schools and the sports and everything to open up. And it’s not until they get out into the work world that they suddenly encounter this. And they’d say “I thought feminism was about not shaving your legs or something, or burning your bra. Or the battles have been won.” Look at the women soccer players we’ve got out there now, winning all the gold medals, outdrawing the males. And the organization that oversees them gives them only 40% of what they give the men. So, welcome to feminism.

Do you think the different standards of judgment are still there for women and men in public roles?

I think they’re still there to some extent. I look at Hillary and I listen to the talking heads talk about “She doesn’t smile enough” or “She screams” or “She shouts.” And I think, wait a minute. I don’t really think I know Bernie Sanders well, but I don’t think of him as one big smile.

What do you see as the most important shifts that have happened since the 1970s for women?

[The year] 2020 will be the 100th anniversary of women getting the right to vote, and it’s time we did an analysis of how well we’ve used it. It’s hard to say what is the most important. If you’re young and child-bearing age, you ought to be absolutely horrified at what’s going on in this country vis-à-vis reproductive rights. If you are young and have a family, you ought to be furious that we’re still the worst of any industrial nation on what we do to support work and family issues. We still pretend like women are working for fun or to make money for jam or something.

What do you think of the amount that is made or isn’t made about Hillary Clinton being a woman and what that might mean if she does win the presidency?

Hillary has been there from Day One on every women’s issue I can think of. And I think as president she would be fantastic, she would really open doors, both nationally and internationally. Internationally, she did a whole lot in the Department of State to make women’s issues human rights issues. They used to be considered cultural issues. Really, if you discriminate against men, it’s human rights. If you discriminate against women, it’s cultural. She’s done some phenomenal things, and I think she’ll continue to do that.

How do you view the Republican candidates on women’s issues?

To me what’s going on the other side right now is absolutely terrifying—to listen to these guys and to see the way Trump has treated women is just off the charts!

What does it say about America that Trump is so popular despite the well-known things he’s said that are overtly or arguably sexist?

Actually I am feeling a little better that 70-something percent of the women are saying they can’t have any part of it. What’s scary is there’s a hardcore of older white males who don’t like what’s happened in the race area, and with women. It’s like “We used to be kings of the hill and now all these other people are getting a piece of the action.” And they’re mad. I think Trump is playing them. I think he knows full well what he’s playing and how to play ’em.