Meet The Man Who Turns Commercial Jets Into Airborne Palaces 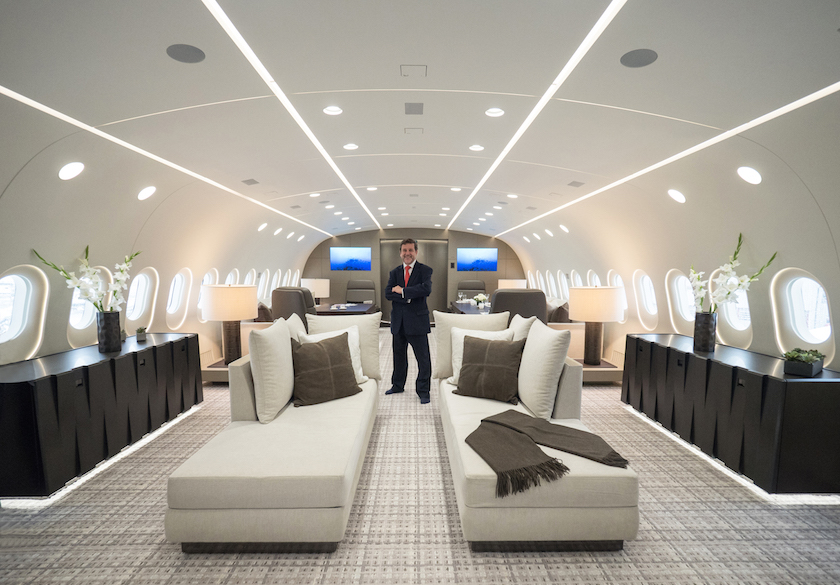 It’s a thriving, little-known industry catering to the planet’s richest and most demanding travelers—European billionaires, Arabian heads-of-state, and CEOs who want to jet between continents as if they’d never left their their trophy penthouses.

Welcome to the world of airline conversions, where artisanal project managers reconfigure big commercial aircraft into custom-designed, airborne luxury suites where the boss or monarch can huddle in a posh conference lounge that seats 40 colleagues.

“The big appeal is that a new generation of private jetliners, for the first time, can fly anywhere in the world without refueling,” says Stephen Vella, founder of Kestrel Aviation Management, a leader in the conversions field. “The world’s wealthiest no longer have to stop on their way to China.” And they’re willing to pay hundreds of millions of dollars for the regal convenience.

Kestrel introduced its latest offering––an individually-tailored version, of course––in late May at the business aviation air show in Geneva. Though the jetliner was already sold to a Chinese conglomerate for close to $350 million, representatives for sheiks, princes, and tech billionaires toured Kestrel’s creation, a converted Boeing BBJ787-8 Dreamliner. It’s the first entry in the hottest new area in the conversions field: medium-sized commercial planes refitted for private owners. The wide-body 787 has major advantages over the two categories of jetliners previously favored by the ultra-wealthy and heads of state. Traditionally, the bottom end of the market has consisted of the narrow-body Boeing 737 and Airbus A320. Dominating the top end is the super-sized 747, the behemoth that’s long transported U.S. presidents as Air Force One and the jetliner of choice for Middle Eastern monarchs.

While 737 and A320 private jets travel a maximum of 9.5 to 10 hours, or around 4,300 miles––the distance, say, from New York to Warsaw––on a tank of jet fuel, the converted twin-engine 787 can carry its privileged passengers nonstop between any two cities in the world, no matter the distance. For example, the 787 covers the 9,200 miles from Los Angeles to Dubai, a 17.5-hour journey, with fuel to spare. To be sure, many customers will still prefer the 747’s superior size; it’s twice as roomy as the 787. But the 787’s globe-spanning range makes it a tempting choice even for traditional 747 customers. The 787 can fly as far nonstop, or even a bit farther, than the new generation Boeing 747-8. Its twin engines burn less than half as much fuel on the same trip as the four-engine 747. Hence, the 787 is far cheaper to operate.

The 787 entered commercial service in late 2011, followed by the A350 in early 2015. But it’s only now that the two models are being refitted for private use. They are the first aircraft to be primarily built from carbon fiber composite, rather than the traditional aluminum and steel construction, making them far lighter than previous jetliners of similar size. Because of its slender weight, the 787 can pack far more fuel than other mid-sized planes with the passenger and baggage loads. Even with a brimming tank, it still weighs a lot less at takeoff than, say, the Boeing 767 it is gradually replacing. The lower aircraft weight and greater fuel efficiency helps the 787 travel farther on each gallon of fuel.

Its composite frame, however, presented Vella with new challenges in “going private.” In the 737 or A330, Vella would drill into the aluminum bulkheads and attach cabinets and other wall-units with rivets. But that system doesn’t work so well with carbon fiber. So Vella had to secure wall-to-ceiling cabinets and credenzas to aluminum rails running along the floors that, in commercial versions, anchor the rows of seats.

Vella had to work with Boeing on the structural modifications. The 787s flown by Delta or Japan Airlines are equipped with a single satellite communications system used by the pilots. Vella had Boeing cut a hole in the aircraft’s roof and install a satellite antenna and radome to deliver cellphone and internet service thousands of feet over any spot on the globe.

That’s just one of the abundant luxury features unveiled at the 787’s Geneva debut. Passengers enter into a grand circular foyer adorned with cherry hardwood floors and walls sheathed in leather. The two main salons in the 2,400-square-foot interior are the dining and conference rooms, equipped with a row of coffee tables that, at the flick of a switch, rise and unfold into a long banquet table, and the main lounge featuring first-class-style, lay-flat armchairs, and twin divans that merge electrically into a daybed. The 40 passengers and 7 cabin crew can access WiFi for their iPads and laptops, and make calls on their smartphones over GSM, at any time and at any altitude. TV shows are streamed live via internet onto the five giant TV screens. Billionaire couples can retreat to the master bedroom suite, a sanctuary offering what Vella calls “a California king-sized bed” and a dual-sink vanity clad in Italian marble.

Vella saved weight without skimping on chic. The bathroom floors are wafer-thin layers of marble crafted in Austria and attached over a honeycombed membrane of aluminum to ensure they don’t crack. The lamp bases and door fixtures are lightweight composite so expensively and artistically spray-painted that even the discerning eye would mistake them for solid brass.

Trained as an aerospace engineer, Vella brings insights to the conversion game from a long career that spans airplane leasing, strategic planning, and advising Middle Eastern governments. Naturally, the Gulfstreams and Bombardiers have been producing popular business jets for decades. But starting in 1997, Vella seized on a far different vehicle for ultra-luxury travel, particularly in the Arab kingdoms: Transforming big commercial planes into ultra-luxurious, custom-designed private jetliners. Over the next two decades, he converted around 20 aircraft, chiefly Boeing and Airbus wide-bodies for heads of state, and narrow-body 737s and A320s for high net worth clients.

Then, as now, Vella acts as a turnkey project manager, a role that, on an office building or apartment project, resembles a combination architect and construction manager. The client provides the financing and owns the plane from acquisition through delivery. Vella advises the customer on the best choice of aircraft on such criteria as size and operating cost. He and his staff of six then design the plane’s layout—does the Saudi prince or French billionaire want a bigger master bedroom suite or larger banquet area? The plane is delivered “green” from Boeing or Airbus, meaning its stripped of all seating, overhead cabinets, and other fixtures.

Once the floorplan is in place, Kestrel engages two outside contractors, an interior designer who chooses the furnishings and wall and window treatments, and an “outfitter” that installs everything from the seats to cabinets. The client covers all costs, and Vella takes a fee based on the thousands of hours he and his staff devote to the project. It’s a long-haul endeavor. From the time the “green” aircraft arrives, the job takes a year of engineering and design and 18 months of installation, testing, and certification.

The 787 on display in Geneva has an unusual history. Vella’s original client was a wealthy individual. “But before we even started on the interior, he decided he didn’t need the aircraft, and decided to let us design it for sale to another customer.” So instead of working with a client to reflect their tastes, Vella had to create something an unknown buyer would desire. He eschewed the usual, heavily paneled “English library” look for sleek, minimalist European design in soothing earth tones.

The look appealed to HNA, a Chinese airline, tourism, and logistics conglomerate based in Hainan that purchased the Vella-designed 787 from its owner. HNA plans to use luxury aircraft primarily for charter flights for companies and the extremely wealthy.

You’d think that interest in these giant planes, and hence the business of taking them private, might be fading now that the fall in oil prices has curbed incomes for the industry’s best customers, Arabian billionaires and heads of state. Not so, according to Vella. In oil rich nations such as Kuwait, the UAE, and Qatar, he says, falling oil prices will not dent demand for these aircraft. And surprisingly, he sees a shift towards more business in the richest oil kingdom of all, Saudi Arabia.

For decades, the Saudi government has owned a large royal fleet of converted jets, including four or five 747s. Vella expects a gradual shift from use of government aircraft to privately owned jetliners by members of the extended royal family. Besides, he says, “The heads of state who used to buy 747s don’t want the exposure and are downsizing to the 787, and the traditional customers of narrow-bodies want the longer range, and are moving up to the 787. We’ll be well positioned for the new wave of purchases,” says Vella. It’s the modern day, irresistible, wide-body version of the magic carpet ride.