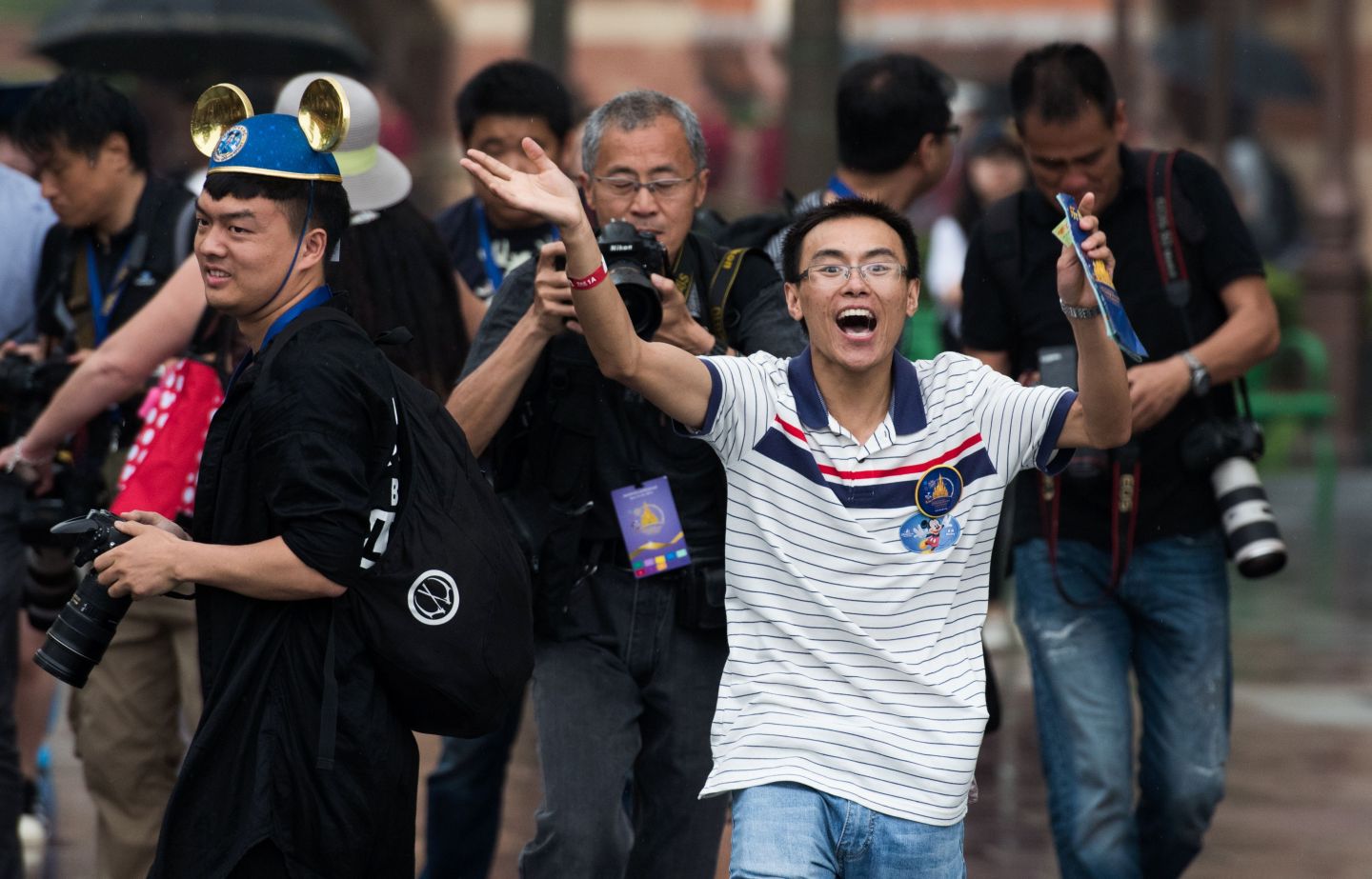 They started streaming in before noon. Guys wearing Star Wars T-shirts. Infants already asleep on shoulders, in their little Daisy Duck shirts. Kids high-fiving the scores of costumed store workers lining Mickey Avenue, as if they had just won their own childhood Super Bowl.

Wang Hou Xue was like a lot of other parents on opening day of Shanghai Disney: Tired, wet from the steady drizzling rain, and proud his child could experience this wonderland. Wang leaned against a fence in Adventure Isle while his 3-year-old son ran circles. His wife was holding a place in line for all three at Roaring Rapids. “My son loves Disney movies and characters,” Wang said, so they came to Disney.

And if 50 million more do each year, as analysts say predict, Disney’s $5.5 billion Shanghai resort will likely inspire business school case studies for decades to come.

Shanghai Disney could turn into the company’s landmark success in its largest potential growth market, but it was never a sure thing. Disney (DIS) spent almost two decades working and negotiating with the Shanghai government before Shanghai Disney finally opened.

Disney CEO Bob Iger first visited the Shanghai site in 1999 when he was the company’s head of international, and he repeats a phrase he coined for the park—“Authentically Disney, Distinctly Chinese.”—whenever given the opportunity.

It is distinctly Chinese in one important aspect: Disney has given up more control on Shanghai Disney than it has anywhere else. It had no choice.

The resort is a joint venture with an Shanghai state-owned company called the Shanghai Shendi Group, which owns 57% of the park to Disney’s 43%. Disney has the controlling stake in the separate management company running the resort, 70% to Shendi’s 30%. The Shanghai government coalition of companies reportedly out-negotiated the famously controlling Disney. Shanghai’s Mayor Han Zheng said today at the opening ceremony, “We have an ancient Chinese proverb, ‘Good things do not come easily.’”

Disney doesn’t have a history of success operating foreign parks. The company’s international theme park division hasn’t reported a profit since at least 2004, when it began breaking out the figures for investors, and attractions in Paris and Hong Kong are widely considered disappointments. Disneyland Paris failed to incorporate the cultural touchstones that Disney talks so much about in Shanghai. When Iger repeats “Authentically Disney, Distinctly Chinese,” it may as well be in response to Disney’s theme park let-downs elsewhere.

An actress dressed as ‘Snow White’ poses in front of the Enchanted Storybook Castle at Shanghai Disney Resort in Shanghai on June 15, 2016. The Magic Kingdom comes to the Middle Kingdom this week when Disney opens its first theme park in mainland China, betting the growing middle class will spend big on leisure despite a slowing economy.Photograph by Johannes Eisele AFP/Getty Images

The theme park is less an individual line item on the financial statements than a glue bringing together the company’s various ventures in film, television, products and travel. China will soon be the world’s biggest movie market and Disney’s hit movies have translated well in the country. Consumer products also sell well to the country’s rising middle class. Disney is playing the long-game in China with the record $5.5 billion park.

The immense scale of the seven-square kilometer Shanghai Disney is a Chinese characteristic in itself. China enjoys large projects, from the Soviet-style buildings lining itself main thoroughfare in Beijing to the world’s largest Three Gorges Dam. “We wanted to make a statement here,” Iger said before the park’s opening day. “So we build the largest Disney castle in the world.”

Disney was planning on expanding the park before it had even finished the first batch of construction. After the 2011 groundbreaking, Iger said Disney added a Frozen sing-a-long performance based on the movie’s blowout box office success and an immersive ride called Soaring, which sends guests flying drone-level above the African Sahara and the Great Wall. Shanghai Disney may well turn into the multiple-park international destination Orlando has become.

The biggest question for Disney is how its park can stack up to the competition, most notably the new theme park from the Dalian Wanda Group. Wanda’s founder Wang Jianlin, China’s richest man, boasted that his parks would ensure Disney Shanghai’s failure.

But Shanghai Disney is fundamentally different from Wanda’s first park, located in the small city of Nanchang. Dalian’s theme park has roller coasters and rides, but feels empty without any recognizable personalities that make a theme park a theme park. Disney has Snow White, Cinderella, Captain Jack Sparrow, Goofy, and Mickey and Minnie Mouse, which are known throughout China. Wanda doesn’t have anything.

Meanwhile, a room at Disney’s Toy Story hotel feels as if it was constructed for decades to come. Wanda’s cheaper hotel in Nanchang has the ephemeral quality of many Chinese hotels, which feel as if they were built to last ten years.

Disney’s park is all perfect angles, comfortable waiting areas, and surprise character visits; Wanda’s feels like a tourist stop put together in haste.

Disney’s Iger might say Shanghai Disney is distinctly Chinese, but to veteran park-goers it didn’t seem much different than other Disneylands in Asia. Savannah Dixon, 16, was visiting Shanghai with her aunt and uncle from Inland Empire, California. “I’ve been to Tokyo and Hong Kong. It doesn’t feel distinctly Chinese, but a good overall mix of everything,” she said.

Even if it isn’t distinctly Chinese, perception supersedes reality at Disney and the park’s opening of an American cultural icon proved China is not closing itself to Western culture, despite growing nationalistic sentiment in Beijing.

Visitors take a selfie after the opening ceremony of the Shanghai Disney Resort in Shanghai on June 16, 2016.Photograph by Johannes Eisele AFP/Getty Images

At the opening this morning, letters supporting Shanghai Disney from both President Obama and China’s Xi Jinping were read aloud. Obama said it “captures the promise of our bilateral relationship.” Wang Yang, a member of China’s 25-person Politburo, quipped about the opening day rain—”I told Chairman Iger that rain is good fortune in China…it’s raining RMB and U.S. dollars.”—before calling the park a win-win for U.S-China cooperation.

You couldn’t sense the diplomatic importance of the place in line for the Pirates of the Caribbean ride, though. Liu Yi and her friend are in their thirties and just felt lucky to be here after snagging tickets last week. “We love Disney characters,” said Liu Yi, a travel agent who lives in Shanghai. She’s happy about her luck. “This Disneyland is said to be the largest one in Asia.”