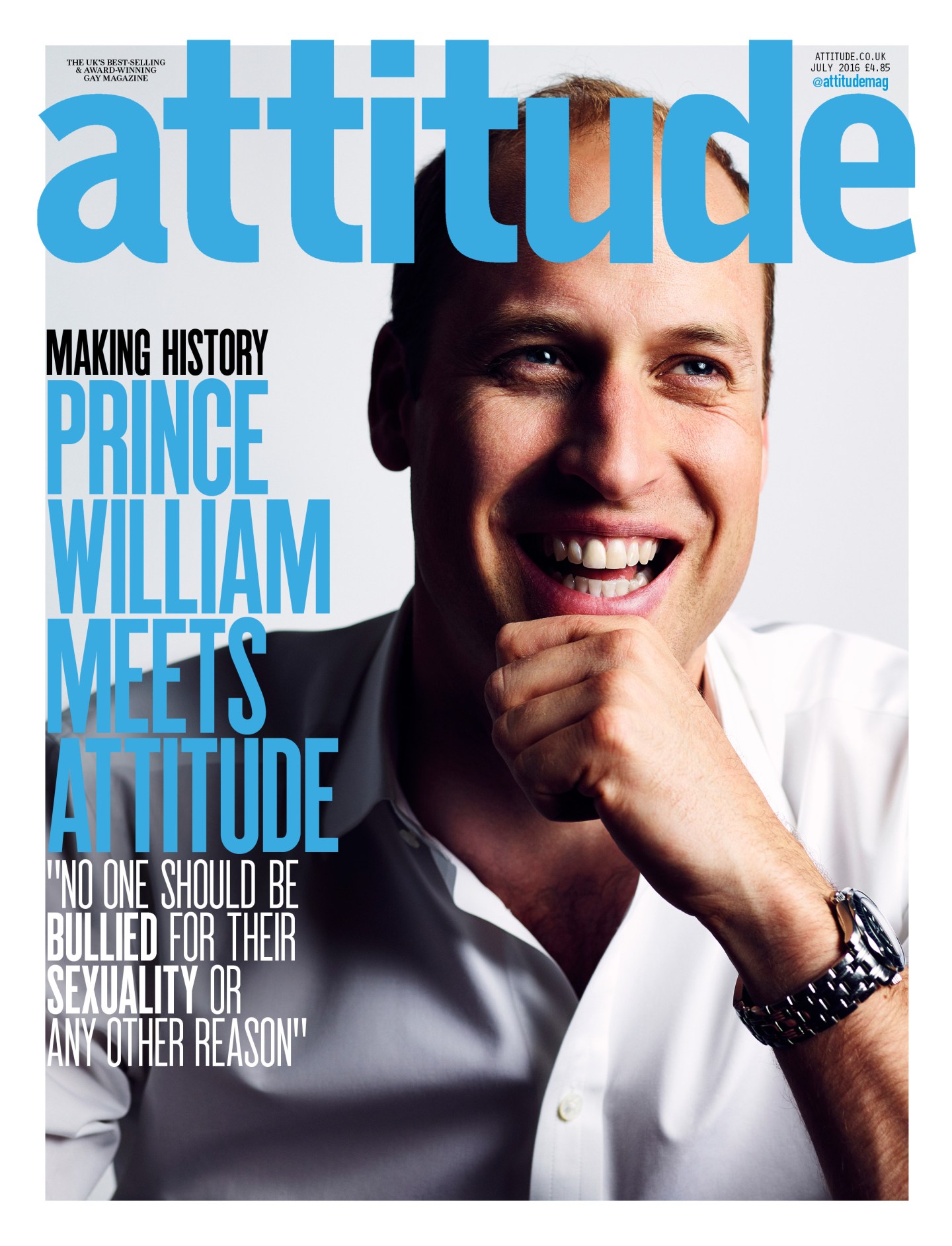 This story originally appeared on People.com

Prince William is speaking out on homophobic bullying – and is now the first royal ever to cover an LGBT magazine.

William recently opened his Kensington Palace home for a discussion with British LGBT magazine Attitude and met with a group of nine people who have endured homophobic bullying.

After the palace chat, William released a statement to the magazine saying, “No one should be bullied for their sexuality or any other reason and no one should have to put up with the kind of hate that these young people have endured in their lives.”

The royal’s appearance on the cover of the magazine comes just days after the mass shooting at the Orlando gay nightclub, Pulse. William and wife Princess Kate paid their respects in the wake of the attack Tuesday when they signed a book of condolence at the U.S. Embassy in London.


William’s efforts are part of the joint campaign on combating mental health difficulties that he has started with Kate and brother Prince Harry. William has also highlighted the plight of male suicide – something he has come across in his work as an air ambulance pilot.

“The young gay, lesbian and transgender individuals I met through Attitude are truly brave to speak out and to give hope to people who are going through terrible bullying right now,” he added.

He praised “their sense of strength and optimism,” which he said “should give us all encouragement to stand up to bullying wherever we see it. You should be proud of the person you are and you have nothing to be ashamed of.”

The young people and families he met explained how bullying had led to low self-esteem, suicide attempts, eating disorders, depression and drug addiction.

Attitude editor Matthew Todd tells PEOPLE, “He put us all at ease despite the fact that we were talking about some intense and sometimes harrowing things. One of those was a mother, Mena Houghton, whose son Mark Houghton died in 2010 at age 27 from an unintentional overdose after years of being homophobically bullied at school. He was great with her and with all of us.”

“He said he wants to help and wants people to stop being unkind to each other,” Todd continues.

Todd – whose book Straight Talk: How to be Gay and Happy is out this week – got a sense of how deep-seated William, Kate and Harry feel about the issue.

“I was completely bowled over by him,” he says. “He was absolutely passionate, compassionate and relaxed. Someone got upset during the conversation and he said, ‘It’s oay to cry. You can cry and be strong.’ ”

“You can tell when a celebrity or a politician is paying lip service to something, but I absolutely felt he meant it and you can see people’s mental health is important to him,” Todd explains.

“There is a head of steam about this issue building which is exciting,” he adds.

On a trip to North Wales last November, William was praised for his understanding and empathy. He and Kate met a group of students from Coleg Menai supported by the mental health charity, Mind.

James Cheffings, 19, from Bangor, told reporters he went through a difficult time at college but talking though things had helped. “I accepted that I was a gay man and now I work in an attitude-free gay bar and am a drag queen on weekends,” he said.

“It came across that they were really accepting and understanding about the whole LGBT community,” Cheffings said. “Which was really nice to see that we in that community have got that support from the royal family.”

“It shows that people who are quite famous people do go to little villages like Caernarfon and little buildings like this and meet people like us who might not always get our voices heard,” he added.

William’s spokesman said in a statement, “The Duke of Cambridge is working hard to support the fight against bullying and to help break the stigma around mental health. He has established a task force on the prevention of cyberbullying and along with The Duchess of Cambridge and Prince Harry, is leading the Heads Together campaign on mental health and well-being.”

“He knows that LGBT young people suffer unacceptably high rates of bullying and he was grateful to Attitude for facilitating such a serious conversation on this topic,” the statement continued. “He was moved by the stories he heard and impressed by the positivity and courage of the people he met.”