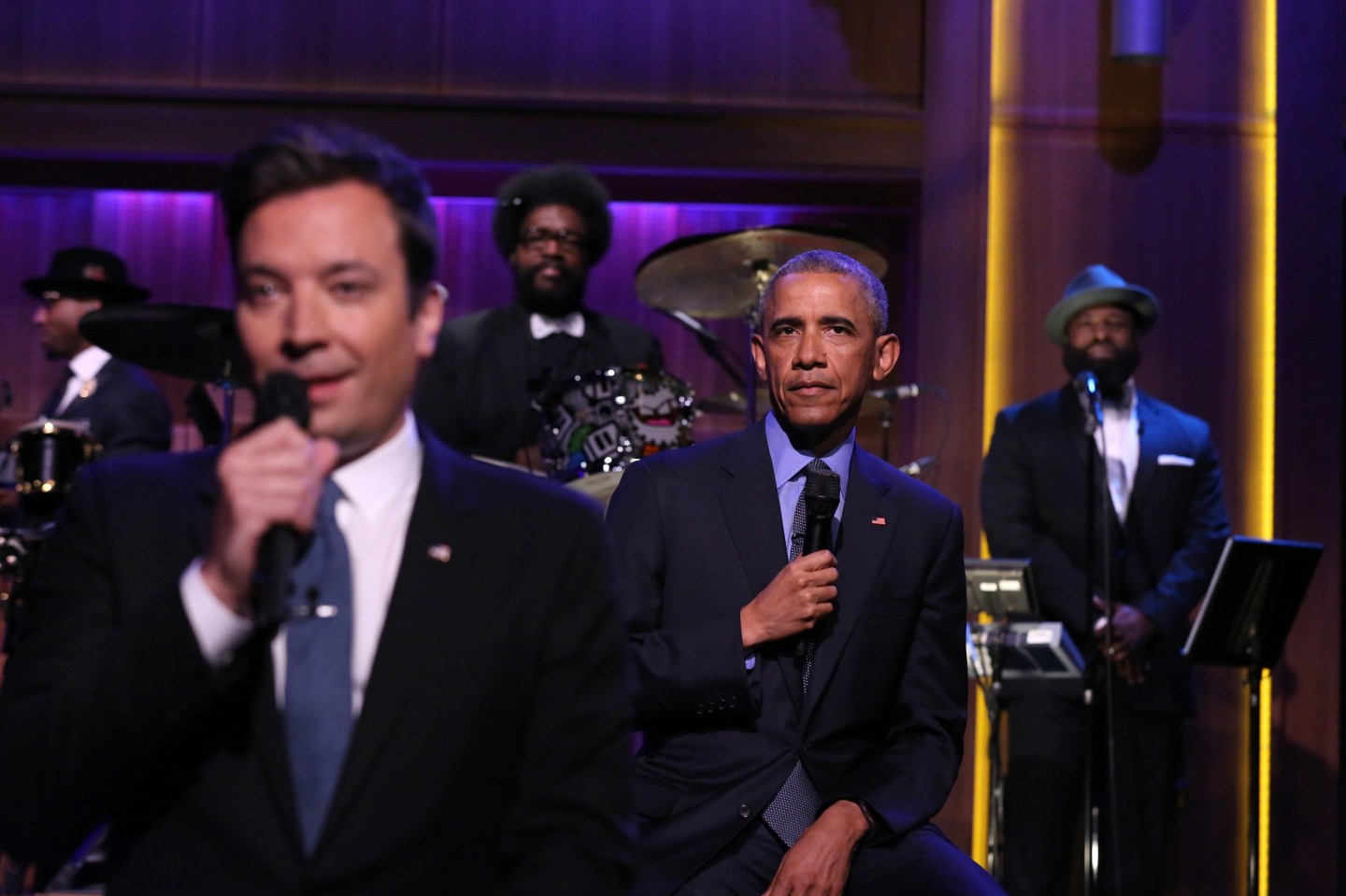 On the same day he endorsed Hillary Clinton for president, the presiding commander in chief Barack Obama appeared in a segment of The Tonight Show Starring Jimmy Fallon and used it as an opportunity to “slow jam” a rather entertaining summary of his nearly eight years in office.

With a straight face, the president touted his economic record as Jimmy Fallon’s house band, The Roots, provided an R&B rhythm. “When I first took office our nation was facing one of the worst recessions in its history. Since then we’ve added over 14 million new jobs and lowered the unemployment rate to under 5%. Under my administration, we were able to stimulate the economy and get our country back on track.”

To which Fallon chimed, “Aww yeah. President Obama stimulated long term growth in both the public and private sector.”

Obama also pointed to the more progressive steps his administration has taken with regards to climate change, the Affordable Care Act, and gay marriage. “In short climate change is real, health care is affordable, and love is love,” he said.

Obama first slow jammed with Fallon in 2012 when they touched on the student loans crisis before a live audience at the University North Carolina at Chapel Hill.

In his sit-down interview with Fallon that aired Thursday night, Obama took a serious tone in assessing the on-going race to determine his successor. Earlier in the day, he officially endorsed Clinton, saying in a video, “I don’t think there’s ever been someone so qualified to hold this office.” He told Fallon that he thought Clinton’s opponent, Vermont Senator Bernie Sanders, “pushed the party and challenged them,” and ultimately made Clinton “a better candidate.” He said, “It was a healthy thing for the Democratic party to have a contested primary.”

He also touched on what Donald Trump’s campaign means for the GOP and the United States’ two-party system. “The truth is I am worried about the Republican party. Democracy works, this country works when you have two parties that are serious and trying to solve problems, at the end of the day, you want a healthy two party system,” he said.

He added, “I actually haven’t been enjoying watching some of the things that have been happening. As a whole, my hope is that there’s some corrective action, and we start figuring out how to work together. My hope is that the Republican party steps back and reflects.”

Obama is expected to start campaigning with Hillary Clinton soon, but that’s not to say he isn’t looking forward to some time off. In the slow jam segment, he mentioned that he has 223 days left in office and already has plans for what he’ll do afterwards—a tropical vacation. “The last time you get on Air Force One, it’s your last flight you get to go anywhere you want,” he told Fallon, adding he wants to go “some place warm” after enduring eight consecutive winters in Washington, D.C. “Michelle and I will take a break somewhere, let the girls manage for themselves, hopefully they’ll be okay when we get back,” he said.