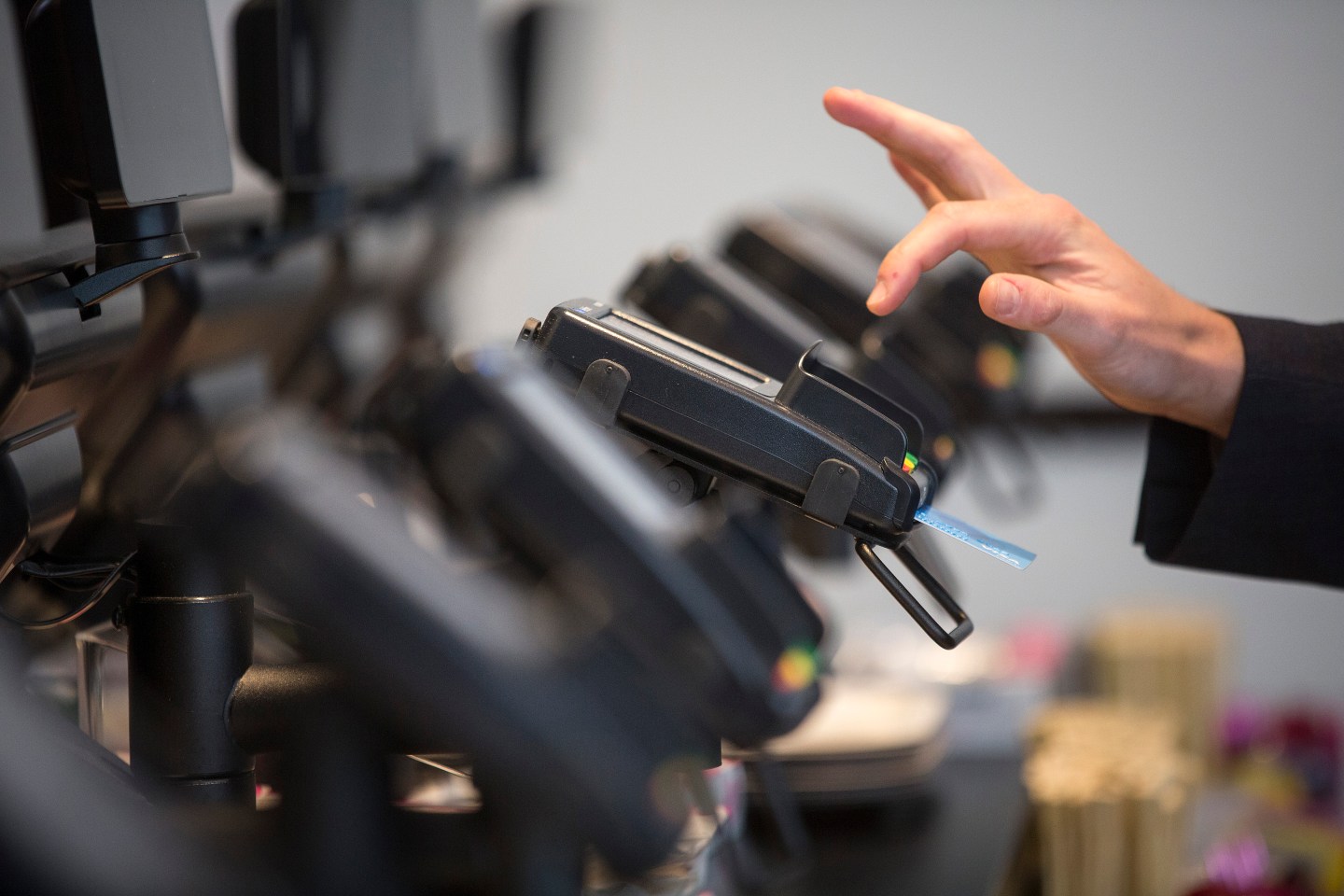 A customer enters their pin number as they make a chip and pin payment via a Verifone Systems Inc. credit card payment device at a restaurant in London, U.K., on Friday, May 22, 2015. Credit and debit cards that can be used by tapping the reader are gaining users, and mobile apps are set to further boost the popularity of contactless paying. Photographer: Simon Dawson/Bloomberg via Getty Images
Bloomberg via Getty Images

Shares of payment processor VeriFone Systems (PAY) took a deep dive in early trading Wednesday, shedding over a quarter of its value after the company drastically cut its 2016 guidance revenue by as much as $70 million, citing, among other things, the slowdown in China, and softness in the retail sector.

The news came after the San Jose, Calif.-based company revealed second quarter earnings that missed Wall Street’s consensus. Earnings fell to three cents a share from 15 cents a year earlier as a result of heavier expenses. Revenue however beat expectations.

“Q2 was a mixed quarter for VeriFone as we grew our business, but experienced several difficult market dynamics,” said Paul Galant, VeriFone CEO in a statement. “In connection with these plans the company intends to reduce headcount and estimates that these activities in total will generate approximately $30 million of savings in 2017.”

Those “difficult market dynamics” that catalyzed VeriFone’s decision to reduce headcount and lower its full year expectations were likely driven in part by weaknesses in emerging markets, including Latin America and Asia.

During the company’s earnings call on Tuesday, Galant noted that the weaker Chinese economy had dampened demand for payment systems all around Asia.

“We think that perhaps in some markets, there is a bit of contagion starting in terms of the desire in those markets for acquirers and merchants to lean in and upgrade to be able to accept consumer electronic payments,” Galant said.

Because of the weaker demand, the competition for consumers in the payment space has also gotten stronger—forcing VeriFone to consider lowering prices, and pressing on the company’s margins and revenue.

Secondly, weakness in the retail space (as seen in the recent results of Tiffany’s, Macy’s, and J.C. Penney) have also pressured VeriFone’s advertising business. VeriFone controls a series of Taxi top ads and the in-taxi payment screens. But retailers have begun to pull back, killing, or delaying, some of those ads.

Following the news, the stock was downgraded by several banking firms, including a team of Barclays analysts by Darrin Pellar. The Barclays team downgraded the stock from “Overweight” (also known as “Buy”) to “Neutral” Wednesday.

“While North America results came in as expected despite continued investor cliff concerns, Verifone’s results were challenged by: 1) ongoing softness in media sales, 2) delays in U.S. EMV certifications (more of a timing issue which was offset by strength in petro), and 3) more intense competitive pricing dynamics in some emerging markets,” the team wrote. EMV refers to chip cards.