Netflix Finally Tells You What You ‘Devour’ And What You ‘Savor’ 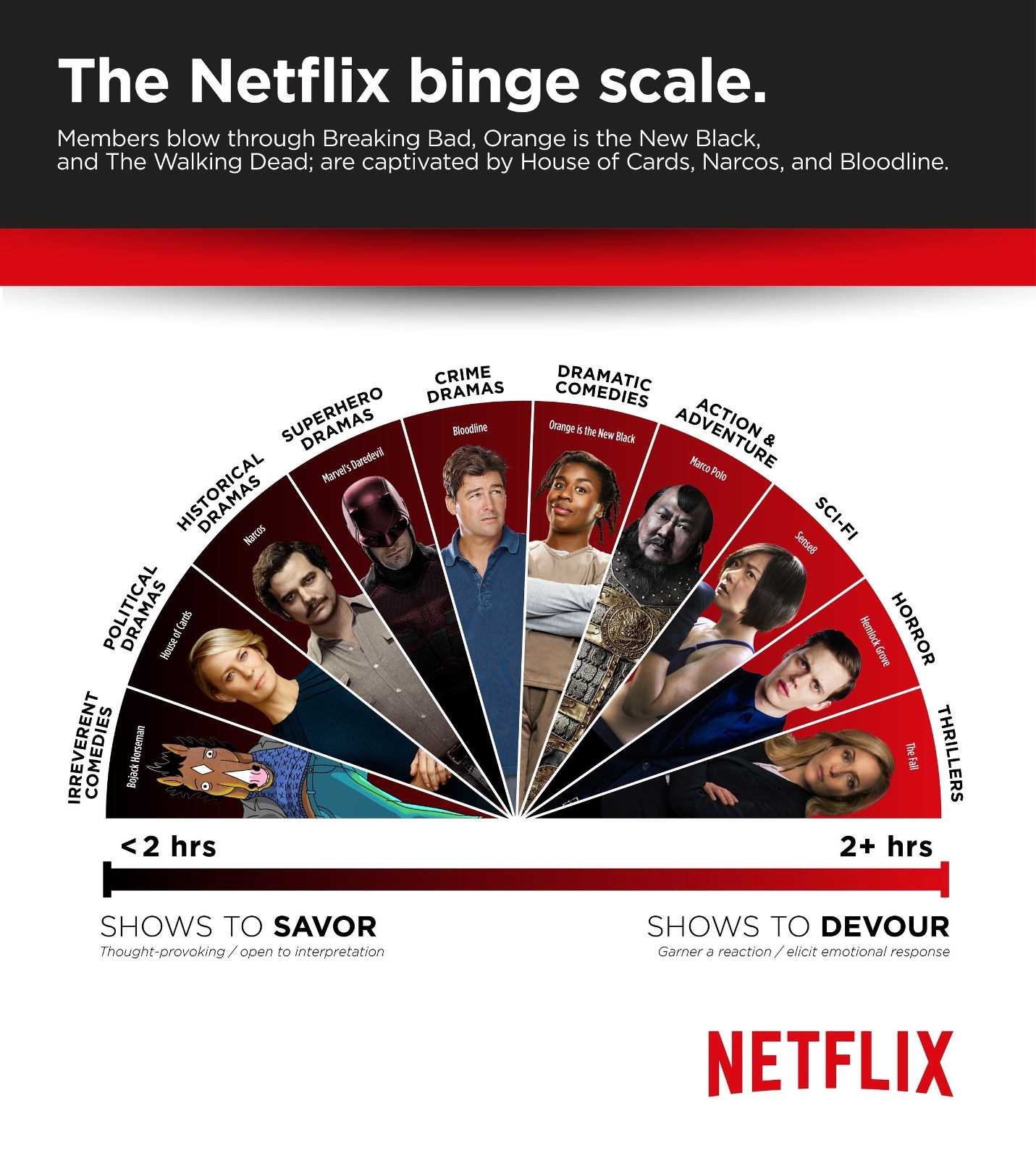 Have you ever wanted to know how you really use Netflix? Well, there’s a scale for that.

To illustrate how its users are really binging—and on what kind of content—Netflix (NFLX) has launched the Netflix Binge Scale.

Over the period of Oct. 2015 to May 2016, Netflix analyzed viewing habits across 100 serialized television series in more than 190 countries. The company looked solely at how its users were watching the first season of all of the series and determined completion of that series in days and hours. Netflix discovered that the average person took five days to finish the first season of the series and spent more than two hours at a time making their way through shows.

The Netflix Binge Scale, though, takes it a bit further and determines which shows people like to “savor” and those they want to “devour.” For instance, “irreverent comedies,” like Arrested Development or F Is For Family were the most savored series, where users took longer to finish the season and typically spent fewer than two hours watching the programs in a single sitting. The category was closely followed by political dramas in the vein of House of Cards and historical dramas like Mad Men.

It was a much different story on the other side of the scale. Thrillers like Breaking Bad were “devoured” by users who would watch the show for much more than two hours at a time. Horror series like The Walking Dead were also in the “devour” category.

“Series like Sense8 and The 100 grab you, assault your senses, and as The Binge Scale shows, make it hard to pull away,” Netflix said in a statement. “The classic elements of horror and thrillers go straight for the gut, pushing the placement of series like The Walking Dead, American Horror Story and The Fall towards the devour end of the scale. Likewise, comedies with a dramatic bent, like Orange is the New Black, Nurse Jackie and Grace and Frankie, seem to tickle our fancy and make it easy to say ‘just one more.'”

“Binging” on shows has become standard in the world of streaming entertainment. We sit down on the couch with a bag of chips and a remote and before we know it, we’ve watched an entire season of our favorite show, a weekend has gone by, and we didn’t even shower. It’s happened to all of us. Now Netflix is showing us on which shows it’s most likely to happen. The company has also put a number of what binging really is: Finishing a complete season in under a week.

It’s unclear what the future of the Netflix Binge Scale looks like and whether it will be updated. But at least for now, it’s showing us the real us—and what we’re doing on a lazy day.