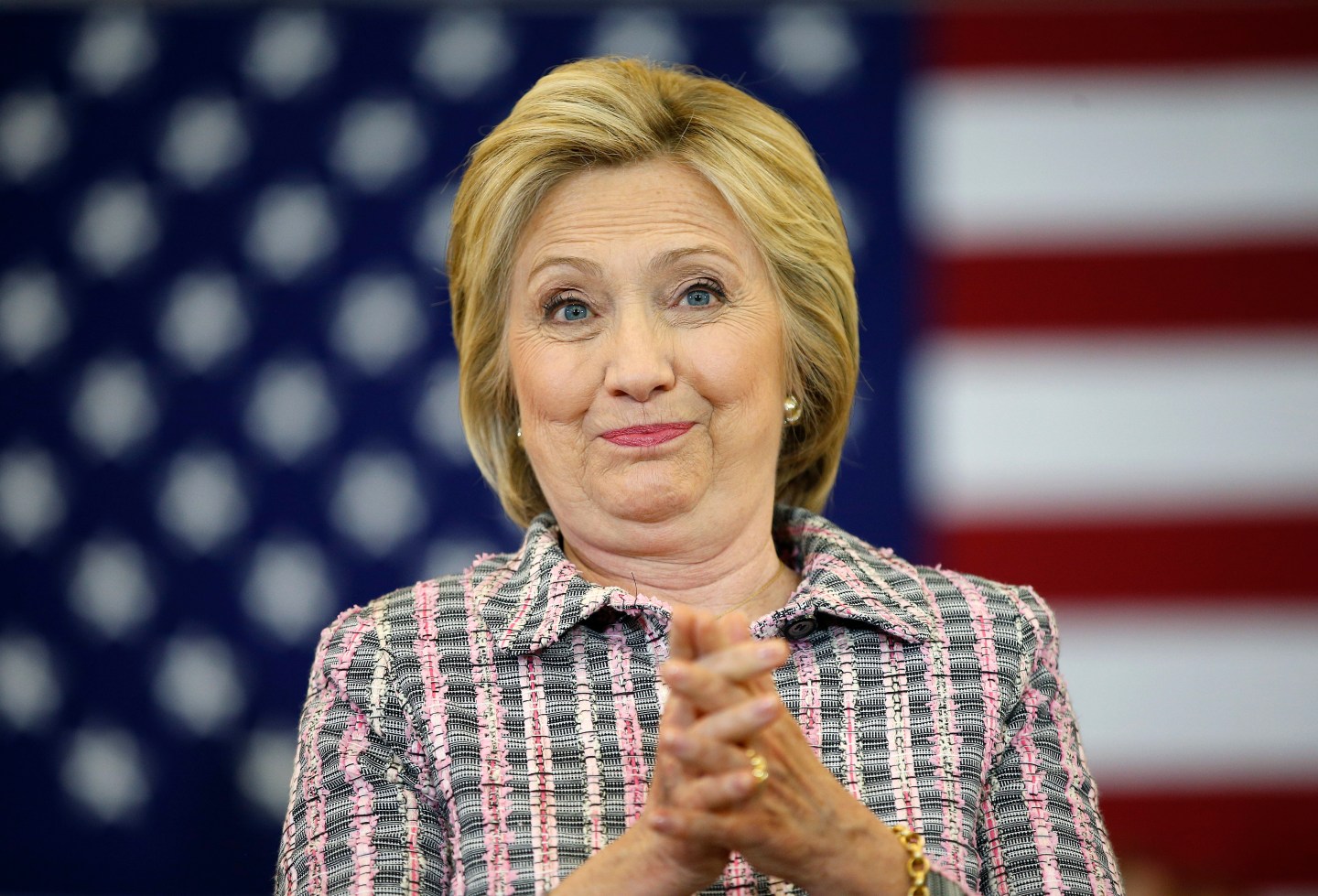 Hillary Clinton stands on the cusp of having enough delegates to claim the Democratic presidential nomination, having overwhelmed Bernie Sanders in a pair of weekend elections in the Caribbean.

Yet the former secretary of state barely noted her commanding wins Saturday in the U.S. Virgin Islands and Sunday in Puerto Rico, instead remaining focused on Tuesday’s contest in California and five other states — and a general election matchup to come against presumptive GOP nominee Donald Trump.

“We’re going to have a very contentious campaign,” Clinton said late Sunday night at a rally in the California capital, “because I’m going to point out at every single moment that I can why I believe the Republican nominee should never get near the White House.”

Urging voters to come out Tuesday, Clinton said she wants to “finish strong in California. It means the world to me.”

After blowout weekend wins the two U.S. territories, Clinton is now 26 delegates short of the 2,383 needed to win the nomination, according to an Associated Press count.

Clinton now has 1,809 pledged delegates won in primaries and caucuses; Sanders has 1,520.

When including superdelegates, the party insiders who can vote for the candidate of their choice at the party’s summer convention, her lead over Sanders is substantial: 2,357 to 1,566.

Though Clinton did not spend much time campaigning in Puerto Rico, the victory is fraught with symbolism for her campaign. Eight years ago, with the presidential nomination slipping from her grasp, she rolled through the streets of San Juan on the back of a flat-bed truck, wooing voters to a soundtrack of blasting Latin music.

She beat then-Illinois Sen. Barack Obama with nearly 68% of the vote.

“I’m for Hillary, girl,” said 83-year-old Candida Dones on Sunday as she cast her ballot. “I can’t wait for a female president. She’s one of us. She wears the pants. If we don’t look out for our own interests, who will?”

Both Clinton and Sanders spent Sunday in California, the biggest prize among the six states voting on Tuesday. Sanders shook hands and stopped for photos during a stroll of more than an hour along the shops, restaurants and amusement park rides of the Santa Monica Pier.

That included a stop at a charity “Pedal on the Pier” fundraiser, where Sanders told people riding on stationary bikes that the U.S. should have “an economy that works for all people, not just the one percent.”

Like Clinton, Sanders made little mention of the outcome in Puerto Rico’s primary. He said during an evening rally in San Diego that Democratic leaders should take notice that the “energy and grassroots activism” that will be crucial to the party in the fall “is with us, not Hillary Clinton.”

He pointed to polls showing him faring better than Clinton in head-to-head matchups with Trump and his strength among Democratic voters under the age of 45.

“If the Democratic leadership wants a campaign that will not only retain the White House but regain the Senate and win governors’ chairs all across this country, we are that campaign,” he said.

While those watching the results in Puerto Rico focused on their impact on the race for the Democratic nomination, the focus of many voters on the island was its ongoing economic crisis.

Both Sanders and Clinton have pledged to help as the island’s government tries to restructure $70 billion worth of public debt that the governor has said is unpayable.

“This is one of the most important political moments for Puerto Rico,” said Emanuel Rosado, a 29-year-old Clinton supporter. “I’m taking action as a result of the economic crisis.”

Two weeks before the primary, Sanders criticized a rescue deal negotiated by U.S. House leaders and the Obama administration as having colonial overtones. In a letter to fellow Senate Democrats, Sanders said the House bill to create a federal control board and allow some restructuring of the territory’s $70 billion debt would make “a terrible situation even worse.”

Clinton has said she has serious concerns about the board’s powers, but believes the legislation should move forward, or “too many Puerto Ricans will continue to suffer.”

Among those voting Sunday was Democratic Party superdelegate Andres Lopez. He had remained uncommitted, but said Sunday he will support Clinton.

“It is time to focus on squashing ‘El Trumpo,'” he said.