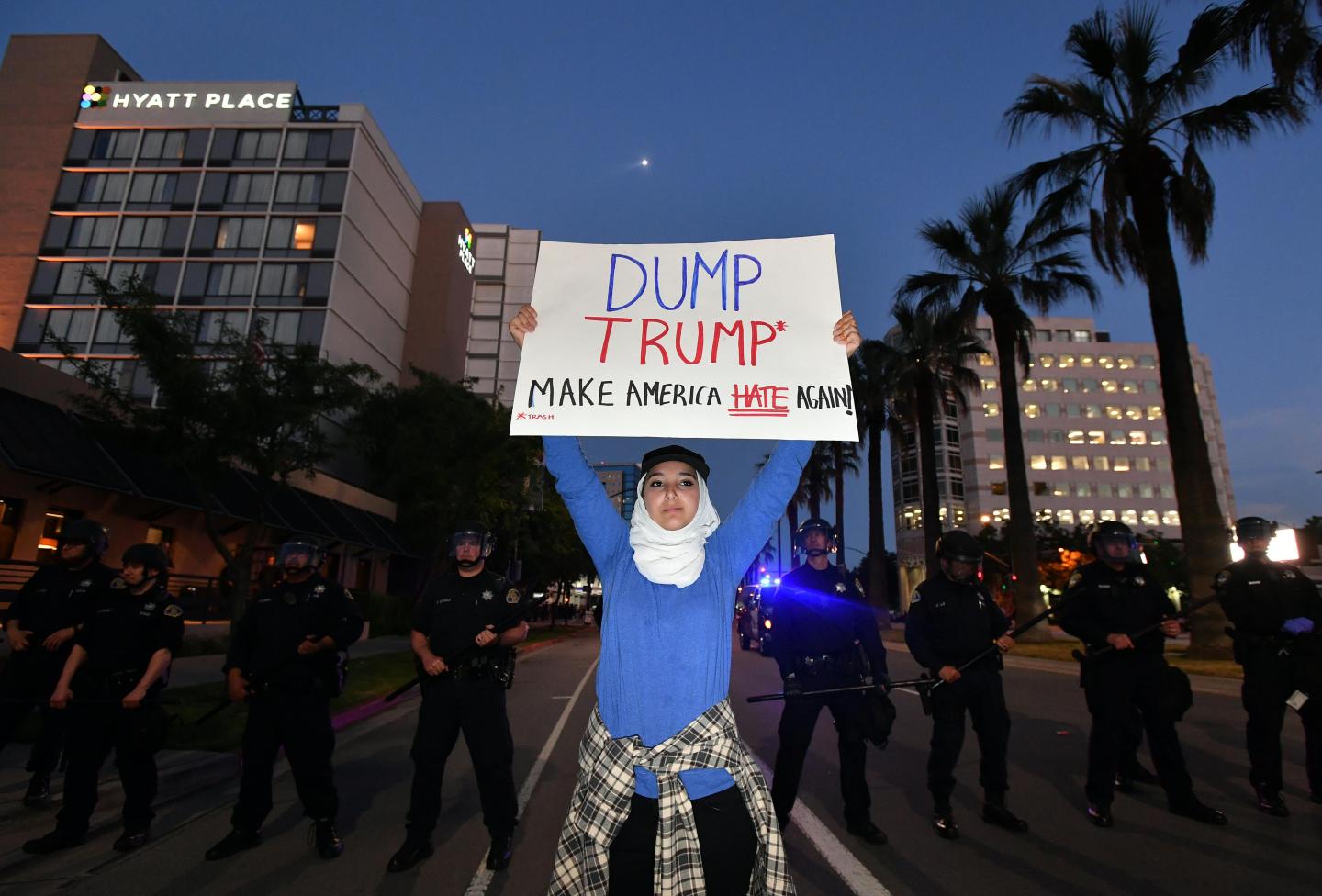 Aya Hilali holds up a sign during a protest near where Republican presidential candidate Donald Trump held a rally in in San Jose, California on June 02, 2016. Protesters attacked trump supporters as they left the rally, burned an american flag, Trump paraphernalia and scuffled with police and each other. / AFP / JOSH EDELSON (Photo credit should read JOSH EDELSON/AFP/Getty Images)
Photograph by Josh Edelson — AFP via Getty Images

Those following the 2016 election have tended to focus, with good reason, on the two major parties and their eventual nominees (with Trump now officially acquiring the necessary 1,237 delegates needed to nominate, and Clinton moving closer and closer to the Democratic nomination). Still, there will be other candidates on the ballot in many states come November, and in a year as volatile as 2016, it is worth looking at these parties and candidates and examining what their impact might be. After all, in an electoral environment where a historically high percentage of voters find both major party candidates unacceptable, a significant number of voters may turn to alternatives.

Although third parties, minor parties, and independent candidacies have typically not been successful in terms of winning office—at least at the presidential level—they have helped shape the terms of debate, and in some cases have directly affected the outcome. The 1844 election contest between James K. Polk, the Democratic candidate, and Henry Clay, was a cliffhanger, with Polk winning the presidency by a narrow 49.5% to 48.1% of the popular vote, and a narrow 170 to 105 votes in the Electoral College. The final outcome was almost certainly affected by the presence on the ballot in many states of James Birney, candidate of the anti-slavery Liberty Party, who, although only winning about 2% of the vote, probably cost Clay, who was also anti-slavery, crucial states such as Massachusetts, Vermont, and New Hampshire—enough to make a difference in the Electoral College. Had Birney not run, Clay would probably have been elected president, and history would likely have taken a dramatically different turn. Clay, for example, opposed the annexation of Texas, and as president, may not have supported the Mexican-American War. The 1860 contest between Abraham Lincoln, the Republican, and Stephen A. Douglas, was massively complicated by the presence on the ballot of two other candidates, which may have contributed to Douglas’s defeat. And, with Lincoln’s election, civil war may have been almost inevitable.

During the 20th century, the election of 1912 witnessed the single, most successful example of a third-party run, when former president Theodore Roosevelt was the candidate of the Progressive Party, or what was popularly known as the Bull Moose Party. Although Roosevelt did not win, he guaranteed the victory of the Democrat, Woodrow Wilson, since Roosevelt and the incumbent, William Howard Taft, split the Republican vote. Had Roosevelt not run as a third-party candidate (Eugene Debs also ran as the candidate of the Socialist Party), Taft would almost surely have won reelection.

George C. Wallace, former governor of Alabama, dissident segregationist Democrat, and candidate of the American Independent Party in 1968, may well have cost Democrat Hubert Humphrey the 1968 election by pulling conservative Democratic votes that would otherwise have gone to Humphrey. Humphrey only began to catch up to Richard Nixon in the final weeks of the 1968 campaign because of the collapse in the Wallace vote from its peak of some 21% in September. The next most successful third party (or in his case, independent) candidacy was that of Ross Perot in 1992, who, running as an independent, garnered 19% of the popular vote and likely cost George H.W. Bush a second term, as exit polls and subsequent analyses revealed Perot’s support drew disproportionately from Bush, and turned what may have been a razor-close race between Bush and Bill Clinton into a comfortable win for Clinton.

Then there was the 2000 election. Everyone recalls the razor-thin margin of victory by George W. Bush, where he barely edged Vice President Al Gore in the Electoral College by a 271 to 267 vote, while actually losing by about .8% of the popular vote. In the final official tally, Gore won a razor-thin plurality of the popular vote, 48.4% to 47.9%. What many people today do not realize, and what was not especially well advertised even in 2000, was that the presence of Ralph Nader on the ballot in Florida and New Hampshire almost certainly cost Gore the presidency. Although Nader won only 2.7% of the vote nationwide, he pulled more than enough votes in Florida (some 97,000 votes) to have made the difference. While it is true that many Nader voters may not have voted at all if Nader had not been on the ballot, it seems beyond belief that a few thousand Nader voters would, without Nader, have opted to vote for Gore, and in an election decided in Florida by a few hundred votes, that would have made all the difference.

This year, there are two minor parties that will be worth watching. The Libertarian Party, a perennial minor party on the American electoral scene, will field Gary Johnson, former governor of New Mexico and Republican-switched Libertarian, and his running mate William Weld, former Republican governor of Massachusetts, who will add considerable credibility and heft to the ticket. Then there is Jill Stein, likely candidate of the Green Party. And, there is still the extreme outside chance that the “Never Trumpers” might entice some high-profile figure to run as a conservative alternative to Trump.

It is likely the 2016 campaign may set new records for negativity. And though this in no way means that Johnson or Stein—or some yet known conservative alternative to Trump—will win, one or more of these candidates may have an outsize impact on the final outcome. The Green Party would likely siphon votes almost exclusively from Clinton, although just as in 2000 with Nader, some of the votes going to the Green Party are likely going to be from those who otherwise would never have voted. In a state like Florida or New Hampshire, should the election be close, the Green Party just might make the difference. The impact of the Libertarian Party is more complex. They almost certainly would take more votes from Trump than Clinton, although there are socially liberal, millennial-generation Democrats sufficiently turned off by the Clinton political baggage.

A Libertarian—or some other independent conservative candidacy—just might provide a kind of safe harbor for unhappy Republicans unable to bring themselves to vote for Trump. Under such a scenario, this might give Trump an advantage in states like Ohio and Pennsylvania, as some polls show Johnson pulling slightly more from Clinton than Trump. While it is too early to say with confidence what kind of effect a conservative or Libertarian Party might have, it is worth pointing out that the intuitive assessment that such a candidacy would hurt the Republican candidate may not necessarily be the case.