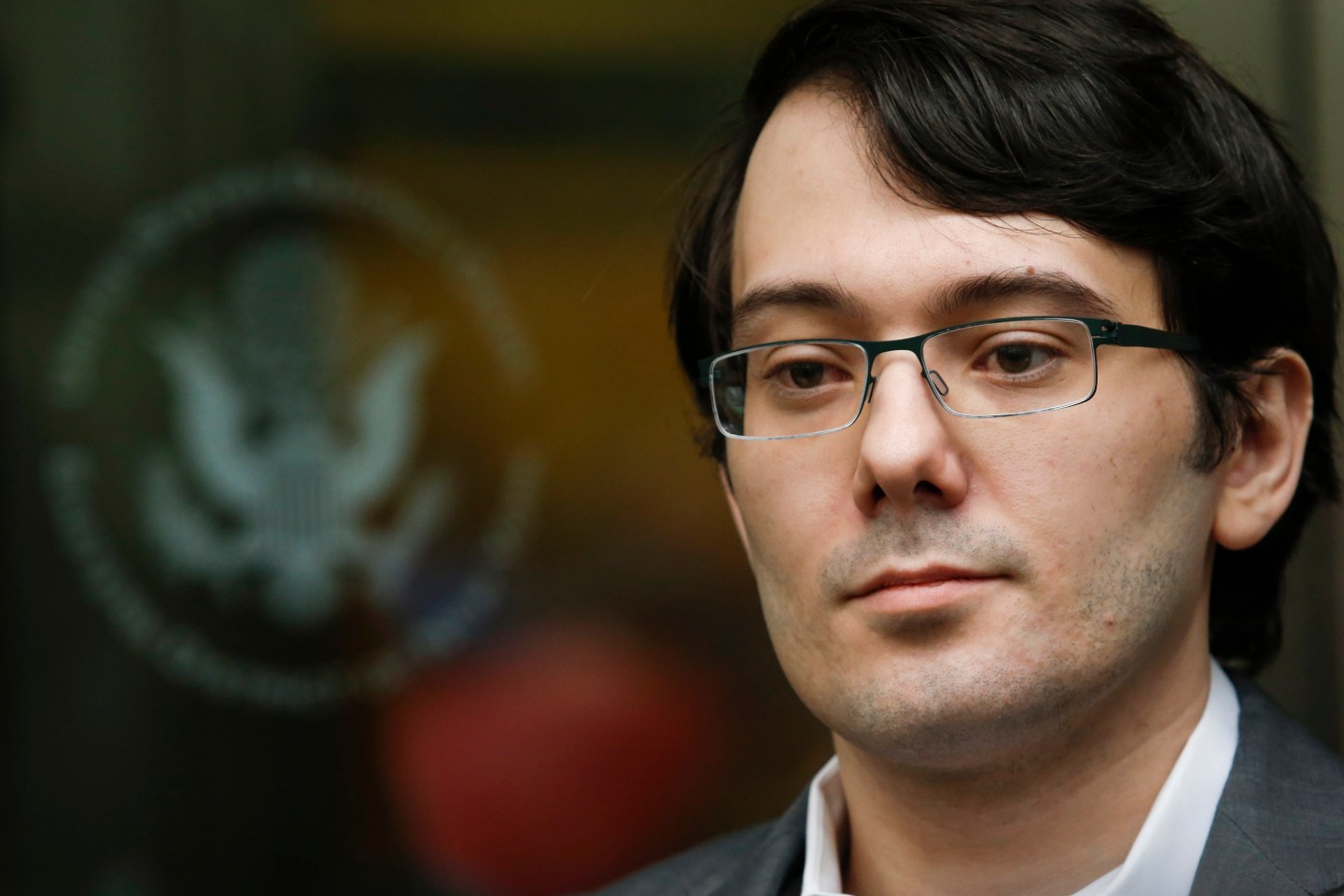 NEW YORK, NY - MAY 03: Martin Shkreli, former Chief Executive Officer of Turing Pharmaceuticals LLC, exits federal court on May 3, 2016 in the Brooklyn borough of New York City. Shkreli appeared in U.S. District Court to face multiple fraud charges, including illegally siphoning money from one of his companies to pay off bad market bets made by another of his companies. (Photo by Eduardo Munoz Alvarez/Getty Images)
Photograph by Eduardo Munoz Alvarez — Getty Images

Martin Shkreli and Donald Trump both face an onslaught of public criticism over their controversial opinions—but that doesn’t make them comrades in arms.

Months ago, one-time hedge funder and pharmaceutical executive Shkreli was branded the “most hated man in America” after hiking the cost of his HIV drug, Daraprim, by 5,000%. The price hike brought both regulatory scrutiny and public outrage, widening the spotlight to the pharmaceutical industry at large. Shkreli was later charged with fraud by the Securities and Exchange Commission and resigned as CEO of Turing Pharmaceuticals. He was even voted Fortune’s fourth-most disappointing leader in March.

On Thursday, the 33-year-old, who has been known to flaunt his wealth, took to Twitter to rant about Trump, specifically, about Trump’s attitude regarding his affluence.

Just a warning—strong language ahead.

fuck him. dont know a lot about trump but his "rich guy" attitude is universally looked down by actual rich people. https://t.co/pC3H0tBfXx

When one Twitter user opined that Trump was using his wealth for marketing purposes, Shkreli retorted that there were wealthier real estate moguls out there, but they haven’t made public announcements about it.

Re Trump as a "routine". There are as rich/richer real estate families youve never heard of. They dont need bombast. https://t.co/YBYcyyZBlA

That doesn’t mean Shkreli plans to vote for Democratic presidential candidate, Hillary Clinton. He’s previously noted that “If someone put a gun to my head and made me vote, I would vote Trump over Hillary.” Though he also added that he would abstain from voting this year, since all the candidates are “crap.”

hell no. i said i vote trump over hillary. and i'm not saying i don't approve of his behavior, saying it is insecure https://t.co/LAWSunwTZY

Shkreli’s psychological analysis of Trump may stem from personal experience, and why he still embraces criticism—often dismissively—even while public opinion continues to turn against him.

Most my brash confidence is for humor & maybe insecurity. I'm very confident when it comes to pharma. All else, meh. https://t.co/zeHW4KuL1H

The one-time pharmaceutical executive bought a $2 million Wu-Tang Clan album back in December, and later said if someone wanted a listen, they would have to pay for it.

“If Taylor Swift wants to come over and s— my d— I’ll play it for her,” he said.

Shkreli isn’t the only one to call Trump—who famously said “I’m really rich” when announcing his presidential run—insecure.

“It’s a measure of his deep insecurity,” Timothy O’Brien, a former business reporter at the New York Times who wrote TrumpNation: The Art of Being The Donald, told the Washington Post. “His wealth and the size of his wealth . . . are integral to how he wants people to perceive him. He looks at the Forbes 400 as the pecking order, and his ego and standing are wrapped up in it. People who are comfortable with their wealth don’t need to brag about it. He’s not in that category.”