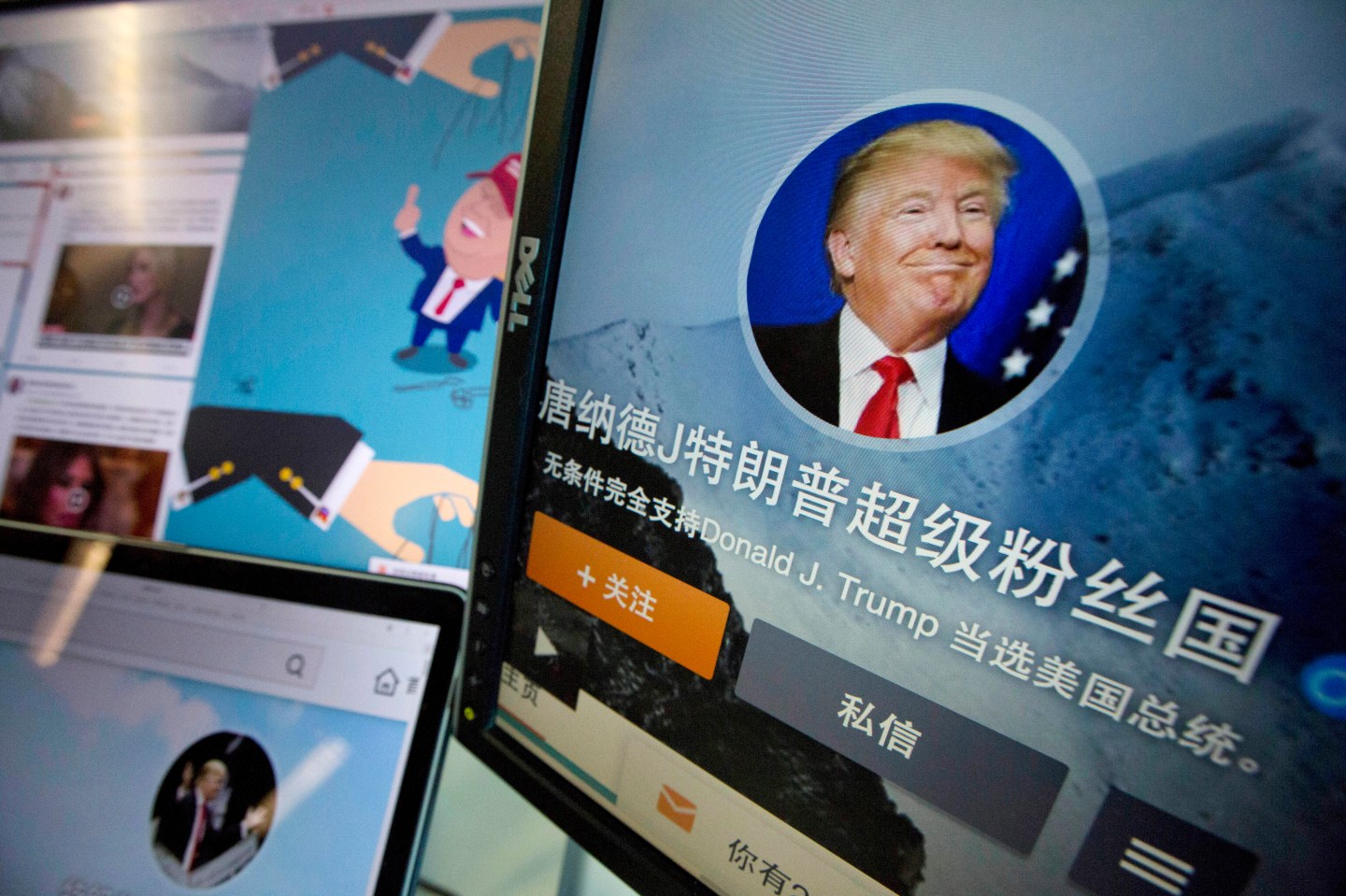 In this May 18, 2016 photo, Chinese fan websites for Donald Trump are displayed on a computer with the words "Donald J. Trump super fan nation, Full and unconditional support for Donald J. Trump to be elected U.S. president" in Beijing, China. China features prominently in the rhetoric of presumed Republican presidential candidate Donald Trump, who accuses the country of stealing American jobs and cheating at global trade. In China itself, though, hes only now emerging as a public figure, despite a notoriety elsewhere for his voluble utterances, high-profile businesses and reality TV show. (AP Photo/Ng Han Guan)
Photograph by Ng Han Guan/AP

China features prominently in the rhetoric of presumed Republican presidential candidate Donald Trump, who accuses the country of stealing American jobs and cheating at global trade. In China though, he’s only just emerging as a public figure, despite notoriety elsewhere for his voluble utterances, high-profile businesses and reality TV shows.

Although the government has denounced Trump’s threats of economic retaliation, many Chinese observers see a silver lining in his focus on economic issues instead of human rights and political freedoms. That could make him an attractive alternative to his likely rival, Democrat Hillary Clinton.

“That’s because the Republican Party is more practical and Trump is a businessman who puts his commercial interests above everything else,” Wu said. Clinton, on the other hand, “might be the least friendly president toward China.”

It’s not clear how familiar Trump actually is with China. While he’s claimed to have made “billions of dollars dealing with China,” he has no known investments in the nation. Chinese, however, are customers for Trump’s hotel, golf course and real estate ventures, while Trump-branded clothing and accessories have been made in China.

Trump mentions the country so often that a popular YouTube compilation video exists in which he says the word China more than 200 times in just over 3 minutes.

Still, Trump was largely unknown in China until his campaign for the Republican nomination began gathering momentum last year.

Trump’s call for a 45% tariff on imports that would hit China hard has been lambasted by Finance Minister Lou Jiwei, who said enacting such a tariff would cost the U.S. its global leadership.

Still, Chinese are used to American candidates making strong comments about their country during elections, only to moderate their positions once in office, said Nanjing University foreign relations expert Zhu Feng.

“The most important thing is that he or she be solid in their knowledge about China and know how to strike the right balance,” Zhu said.

Many Chinese may also be relieved that Trump is focused so relentlessly on China’s role in the U.S. economy, rather than on human rights and similar issues.

Trump’s questioning of U.S. foreign military commitments is also sweet music to the ears of Chinese nationalists who want China to be top dog in Asia and challenge U.S. dominance in the rest of the world. His opposition to the Trans-Pacific Partnership trade deal, which seeks to offset Chinese influence, also goes down well in Beijing.

The Chinese public, meanwhile, seems unfazed by Trump’s anti-immigration stance, with its overwhelming focus on Mexico, and the candidate’s vow to bar Muslims from entering the U.S.

In contrast, many Chinese have qualms about Clinton, who as a former secretary of state under Barack Obama is closely associated with Washington’s “pivot” to Asia that has been heavily criticized by Beijing.

Overall, Chinese public sentiment toward Trump appears mixed. Comparing him to a figure from folklore known for sowing chaos, the official Global Times newspaper proclaimed him a symptom of an “American disease.”

“I don’t think many people knew him as a businessman before the campaign,” said Shanghai IT engineer Kong Kong, who was unimpressed with Trump’s vaunted political outsider status.

“Politics is not entertainment and simply being fresh may not be a good thing,” Kong said. “A lack of political experience and an excess of personality may lead to an imbalance among interest groups and an abuse of authority, which are not good things for America.”

Zhong Heng, a Shanghai paralegal, said she regards much of what Trump says as bluster. “He’s like an artificial performance-enhancing drug being fed to the American people,” Zhong said.

Trump, though, does seem to have won some Chinese supporters, particularly online. There, chat groups such as “Donald Trump Super Fans Club” and “God Emperor Trump” have popped up in recent months. One posting in a Weibo messaging service chat group was unrestrained in its enthusiasm.

“The more I know about Donald Trump,” it said, “the more I feel that he’s not only saving the U.S., but also the entire world.”