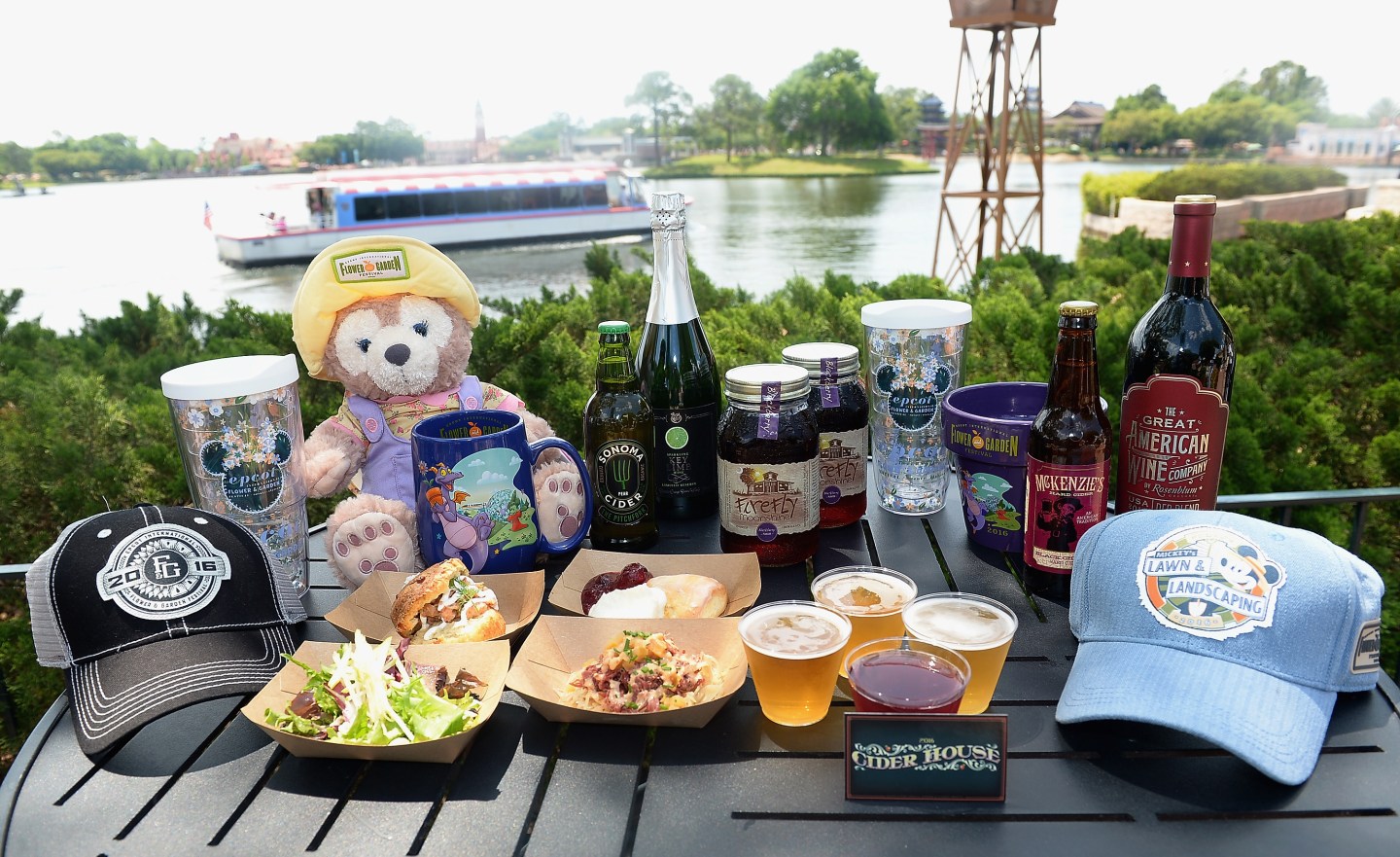 If you vacationed at Walt Disney World in the past few years, you probably wound up at Downtown Disney, grabbing a table at Planet Hollywood or eating dinner beside a larger-than-life dinosaur in a Mesozoic Era-themed restaurant. While the old classics still remain (yes, T-Rex is as busy as ever), so, so much has changed since your past visit.

Not only does the dining, shopping, and entertainment district now have an entirely new name—Disney Springs—it’s essentially become a year-round food festival. Disney (DIS) has unveiled a slew of new dining, drinking and dessert outposts with more to come in the next year—which, when combined with the pre-existing food trucks, vegan delights, and upscale restaurants makes for quite the grub festival on park grounds.

The best part? Nearly all of it opened last week, meaning your next trip to Disney World will feel like you’ve fallen into a foodie paradise. Where else can you walk around on Disney property chowing on everything from taiyaki red bean cakes to traditional poutine?

Start studying your menus and get ready to eat the wildest, weirdest and most wonderful food Disney World has to offer.

Sorry, EPCOT—this is the place to eat your way around the world.

A food kiosk called The Daily Poutine is now open, focusing on the Canadian fried favorite of thick-cut fries slathered in cheese curds and gravy. (And we thought we had it good with American-style cheese fries!) An Italian version with mozzarella and Bolognese sauce, a French-style poutine with mushroom cream sauce and Gruyere and even a Latin version done with fried yucca, queso fresco, black beans and pulled pork are all available. Yesake has unleashed sake slushies and hand roll burritos mixing Asian flavors with Mexican mainstays and Indian spices, and Morimoto Asia also welcomed Morimoto Street Food last week, a quick-service food stand and outdoor patio offering twists on traditional Japanese delights like donburi rice bowls, kimchi bao tacos, and even Takoyaki—an octopus-filled Tokyo street staple. If after all that, you’re still hungry for some worldly tastes, B.B. Wolf’s Sausage Co. offers Portuguese Sausages and Bavarian Sausage Sandwiches—not to mention a 3 Little Pigs sampler, which lacks in international flavors but makes up for it with a pun on a bun.

For more on Disney, watch this Fortune video:

No time to wait in line for your evening dessert? Guests who prefer their sweets in hand as quickly as their cash will love Sprinkles’ Cupcake ATM, which offers a rotating menu of famed flavors all morning, day and night from a computerized machine. (For those who want more of a variety, or simply to order from a human, the actual bake shop is during business hours as well.) You can chow on pizza as quickly as your cupcakes, too, once Blaze Pizza opens in Disney Springs later this summer. Their signature “Fast Fire’d” pizzas and create-your-own pies are cooked up in just three minutes—perfect for picky eaters or when you time a pre-fireworks visit to Disney Springs a bit too close.

Chow down on inventive versions of your old favorites

The Disney-operated D-Luxe Burger opened on Sunday and is already putting inferior picnic favorites to shame with their unique menu. Not only are there homemade veggie burgers (vegetarians, rejoice!) and a chorizo-blend El Diablo burger, but the fries are where it starts to get interesting, with six different dipping sauces will be offered free of charge. Even their milkshakes are kicked up a notch, using gelato instead of ice cream and offering hard versions, like a smoked bourbon and beer flavor, that are well beyond what you’d get at the burger joint back home. And, of course, even the fanciest dessert you know gets a makeover at D-Luxe with a Red Velvet Burger Macaron, a tiny dessert hamburger that looks just like the real thing, right down to the last drop of ketchup—or, in this case, raspberry sauce.

And, if that wasn’t enough, Aristocrepes will serve up a menu of both sweet and savory options of the thin French favorite when it opens this coming weekend. The s’mores and Key lime cheesecake crepes are somewhat straightforward, but rumblings of a beef with horseradish cream and cheddar option and a smoked salmon crepe with cream cheese, capers and an “everything bagel” topping are simply wild.

More from T+L:
• Unusual Airplane Tragedies: EgyptAir MS804 in Context
• What Really Happens When You Don’t Turn Off Your Cellphone on a Plane
• How to Plan the Perfect Botswana Safari

The fine dining options at Disney Springs have hit a serious high now that STK has opened. The steakhouse, which boasts locations around the world in cities like New York, Milan, and Ibiza, has begun serving its signature seafood and steaks right on Disney property. It’s the perfect spot to transform a birthday or bachelorette meal into an event, as it’ll even house a live DJ, the first of a few new nightlife options to come.

But, whatever you do, save room for dessert—the newly opened Amorette’s Pastisserie is a full-blown gamechanger, offering stunning cakes, sacher tortes and other sweet delicacies you’ve never seen at Disney World before. There’s a signature 11-layer cake, authentic New York-style cheesecake, European-style chocolate chip cookies and even Japanese matcha and yuzu pastries which will make you forget Mickey bars ever existed. There are delicate petite cakes for small celebrations, too, but the absolute show-stopper are the gourmet character cakes. Inspired by the personalities of Goofy, Mickey, Donald, and Minnie, the gorgeous domed creations utilize local flavors like Floridian orange and unique tricks like chocolate cake with popping candies to make birthdays that much more magical.

And that’s not all.

Homecoming: Florida Kitchen and Southern Shine, the newest restaurant from James Beard Award-winning chef Art Smith, will offer shrimp and grits, pimento cheese and other southern delicacies inspired by his childhood growing up on the Florida-Georgia border when it opens later this summer. Come fall, Fulton’s Crab House will reopen as Paddlefish, a re-imagined seafood restaurant offering lobster guacamole and build-your-own seafood boils as well as host a roof deck open ‘til 2am—the latest of any Disney Springs properties thus far. Details are still limited about Rick Bayless’ forthcoming Tablas Frontera, but the steampunk-inspired cocktail club The Edison is finally slated to open Spring 2017. With seven different bar and lounge spaces, each visit will be a completely new experience, complete with cabaret-style live entertainment, contortionists, palm readers, DJs and more. It sounds incredible, even if it outshines those mid-day park parades.

This article previously appeared on TravelandLeisure.com.