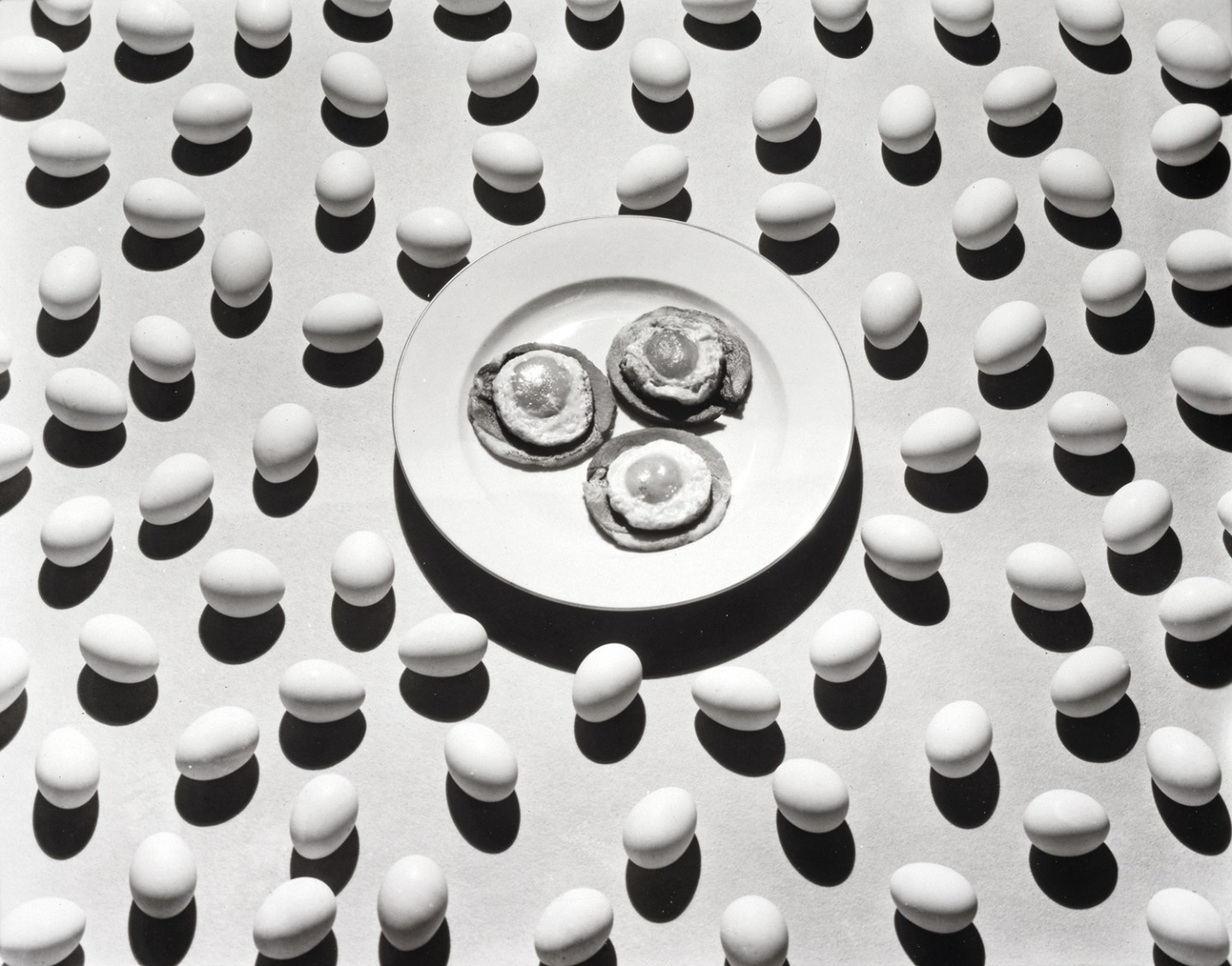 If good photographers can make food look great, can they also make it taste great?

That’s the question that inspired The Photographer’s Cookbook, a remarkable collection that’s being released this week by the not-for-profit publisher Aperture and with the George Eastman Museum.

The project started 40 years ago, when Deborah Barsel, then the assistant registrar at the George Eastman Museum of photography in Rochester, N.Y., started requesting and collecting photographers’ recipes and food photography to put together a cookbook. To her surprise, Barsel received over 120 responses. She left the Eastman for graduate school before she could get the book published, however, and the museum archived the materials.

Lisa Hostetler, the curator of photography at the Eastman, picked up the project some 30 years later. And now, for the first time, we get the opportunity to see, make, and eat these recipes from well-known photographers like Burt Glinn and Horst P. Horst—some of which are themselves carefully crafted works of art. Even some renowned contributors to Fortune, like Ansel Adams and Ralph Steiner, added recipes to the collection.

The range of recipes and photos is stunning. It spans from the detailed and earnest to the comical, from George Eastman’s famous Lemon Meringue Pie to Robert Heinecken’s Serious Martini (note: “This drink is not recommended before 11:00 a.m.”) to a postcard from John Gossage saying “I eat out.” Also included in the recipes are little tidbits that that show off the photographers’ likes and personalities. Barbara Crane, for example, notes that she loves cheesecake and really loves to eat “as long as someone else cooks it.” And Arthur Tress calls his Sweet and Sour Broccoli “a great conversation dish at parties or at home alone when you’ve no one to talk to.”

1. Melt butter in microwave oven, but do not allow to brown. Add a dash of mixed spices and sherry.

2. In a small bowl, microwave malt or ale with 1/4 teaspoon salt just to the boiling point. Carefully slide eggs into this hot liquid, cover with paper plate or glass bowl (to retain thermal heat), and cook as desired in microwave. (See note below on microwave cooking.)

3. While eggs are cooking in microwave, make two pieces of toast. Spread part of the butter-spice mix over the toast.

4. Serve eggs on the toast, and pour over the rest of the butter-spice mix. Add a dash of paprika.

Note on microwave cooking:
I like my eggs poached soft. I find that 1 egg in the hot ale or malt takes about 1 minute to cook, 2 eggs about 2 minutes, etc., all the way up to 8 eggs about 8 minutes. When working with as many as 8 eggs, the bowl should be moved around every 2–3 minutes.

My most delightful and favorite “tidbit gastronomique” is called the “Nylen Full-Dress Frank.” It’s named after a professional colleague, Judy Nylen, who not by chance is also its creator . . .

The frankfurter need not be left naked! It can be formalized, decked out, and ethnicized for a sumptuous midnight snack or fun party fare. Condiments, garnishes, and accents can take on any theme. Those described below are “regional costumes” to be grouped buffet style for a party so guests can create their own masterpieces.

Bring 6 quarts of water to a boil in one or more large pots. Remove pots from heat, and put in frankfurters. Cover and let stand 7 minutes. Frankfurters can be served right from the pot, or kept warm on a hot tray set on low. They will last several hours in warm water.

Buns can be warmed in an electric bun warmer or an improvised version created by placing a basket in an electric frying pan or wok, wrapping buns in a large napkin and covering.

Spoon applesauce over frankfurter, and garnish with crab apples.

Place lettuce under frankfurter which has been sliced lengthwise; stuff with tomato slices down the center and top with dressing.

Spoon macaroni onto bun, put in frankfurter, cover with a little more macaroni, top with bacon and grated cheese, and melt in toaster oven.

Heat chili through, and keep warm on hot tray. String peppers, 3 or 4, on to frankfurter, top with chili and onions.

Cut frankfurter in short, diagonal slits, and stuff these with water chestnuts. Top with peaches, bamboo shoots, and sauce.

Slice frankfurter lengthwise and stuff with 3 or 4 kumquat quarters, alternating with red onion. Surround with mayonnaise.

Smother frankfurter in relish, and garnish with watercress “clovers.”

Heat beans through, and keep warm on hot tray; spoon over frankfurter, and garnish with parsley.

Place pineapple rings over frankfurter, garnish with cantaloupe, and top with chutney.

Basically I am more a Basse Cuisine than a Haut Cuisine chef. I got my Cordon Blue not in Paris but in Erie, Pennsylvania. There I learned two accomplishments:
– How to take a box of corn flakes down from the shelf.
– How to boil 2 four-minute eggs.

Eggs are important! You, of course, recall Samuel Butler’s famous solution of the ancient question: “Which came first, the chicken or the egg?” He said: “The egg came first: a chicken is only an egg’s way of making another egg.”

Now for my “favorite”/only recipe:

One puts water an egg’s diameter deep into a pan. Turns heat on. When boiling briskly, drop two eggs in from low altitude. Turn heat off. One watches one’s watch watchfully for two hundred and forty seconds. At the stroke of two forty, one removes eggs. On opening eggs I always manage to get some bits of shell—or is it “will” in my eggs. I never know when to use “shell” and when to use “will.” Never mind; a bit of shell ingested gives a man shell power.

While most of us are familiar with the commercially available carbonated malt beverage known as “beer,” few have experienced the pleasure of the carefully made “home-brew.” During Prohibition the art of home beer making was given a bad name by those who exercised sloppy technique or used inadequate equipment. Today brewing has been scientifically researched and made safe and simple for basement brew masters. All ingredients and equipment are available from wine-makers supply stores and will concoct a drink of exceptional flavor and potency. While technically home beer making is still illegal, many amateur wine-makers have switched to beer making because of its relative ease, faster rate of production, and flavor which is superior to domestic beers.

The recipe below is one which I have found particularly successful. The result is a form of “steam beer,” or beer which ferments around the temperature of 65 degrees and a variety that I find as good as “lager” beer (lager beers ferment at approximately 38 degrees and take longer to mature).

1. Boil 1 gallon of water in saucepan, add can of malt extract, and 4 cups corn sugar. Stir ingredients until dissolved; then add hops. Boil mixture for 10 minutes.

2. Put 3 1/2 gallons cold water in clean plastic garbage pail and add the hot mixture of water, malt, and corn sugar to it. After stirring, add beer yeast. Cover garbage pail with lid and place in a cool, dark place. Fermentation will now take place and a layer of foam will form on top of the liquid.

3. When the foam subsides (1 or 2 days) transfer the liquid (green beer) into the 5-gallon water bottle and attach air lock. Allow to ferment in this container 5–7 days or until the beer becomes clear and stops bubbling.

4. Siphon the beer back into the clean garbage pail leaving sediment behind. Add 1 cup of corn sugar to 1 quart of the beer in a saucepan. Boil, and dissolve the sugar in the beer; add the mixture to the rest of the beer. Bottle and cap the beer using the beer bottles. Age it at room temperature for at least 2 weeks. Peak flavor is reached in 35 days, and the beer will last indefinitely. A small amount of sediment will form on the bottoms of the bottles, and the beer should be poured carefully into a mug for drinking. This sediment is yeast and is not harmful and is also delicious when used in bread making.

Cook as usual grits in salted water until done. Then add butter, cheese, eggs, and milk. Stir until melted smooth. Place in quart casserole, and bake for 1 hour at 350 degrees. Serves 6–8.

For one thing I do not consider Alice B. Toklas a GREAT cook. Very likely her cooking contributed to the death of Gertrude and herself. Besides her beef stew cooked in burgundy, I can think only of her beautiful soups beginning with gazpacho from everywhere. I do not know how to put it, but exotic eatery is very interesting to me. I think we are all TOO addicted to salt and that we can get enough in vegetables that offer it. We do not know the flavor of anything because we doctor it too much. While I am on soups, I should tell you what I do for borscht. I make a good soup of beef and meat and bones; put some fresh beets in, and when I am ready to serve it, I make it half mine and half Manischewitz (commercial bottle of borscht). I prefer it cold with sour cream.

Hoping that we will all someday become “World Citizens,” I decided to bring some food, originating in other countries, into a bread-cake mix, such as: soy beans, tapioca, couscous, bananas, pineapples, cashews, dates, macadamia nuts, etc.

I precooked the grains to retain their character and form, and then mingled them with the regular wheat flour, that brought it all together in a spread-out loaf. Then using nuts, seeds, dates, and raisins I added a little mosaic touch as a topping.

This is a first-time experiment; so the balances can, no doubt, be improved. I did not add water or milk to the mix, for I kept enough of the fluid from the pre-cooked grains and the fruit juice.

To be honest, I never “follow recipes.” I find it boring and not enough fun. So I cook according to the weather, the mood of the people, etc., and try to make it “simple and organic.” Apropos of mood, I remember when I was fascinated by HERBS, that my son, Lloyd, then 7, had just tasted a new dish we were having for dinner. He said, “Mother, could we ever eat something that didn’t have a single herb in it?”—So, then I reformed.

But Lloyd also liked to experiment with fork and spoon, if not with herbs.

Another food idea I live with is to have condiments on the table in small dishes: coconut, raisins, peanuts, dates, almonds, soybeans. These vary from day to day. Then people can doctor the food to satisfy their taste buds as they eat. At one crazy party, I actually served whale blubber—but only once.

Crust:
Make graham cracker crust following instructions on box, but increasing all the quantities 50 percent. Be sure to use brown sugar.

1. Combine sugar, flour, cornstarch, and salt in a saucepan, and stir in water gradually. Cook on medium heat until thickened. Add the beaten egg yolks gradually and return to a low heat and cook for 2 minutes stirring constantly.

2. Stir in the butter, lime juice, and rind and allow them to cool slightly. Pour into the baked pastry shell and cool.